Should footballers stick to the day job? After watching these, you'll be nodding yes.

The Premier League kicks off tonight when newly promoted Norwich City head to last year's runners-up, Liverpool. To celebrate the return of the beautiful game, Campaign names and shames the most egregious football-inspired ads, from an inaudible Wayne Rooney, to Burger King encouraging women to get impregnated by footballers.

Brentford ‘Till I Die 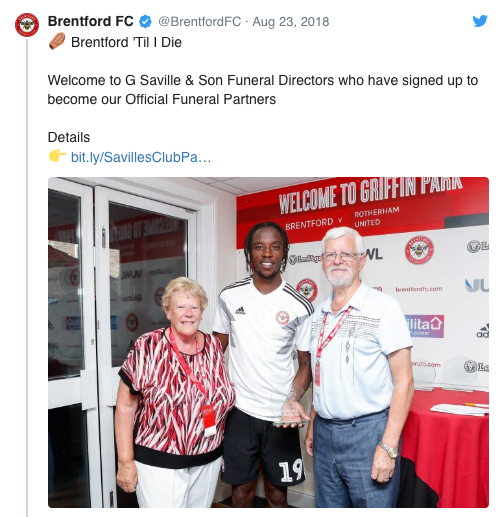 The sponsorship enabled the Bees’ fans to reap a variety of benefits, including a "bespoke coffin in club colours and sporting the Brentford FC badge", to prove their loyalty even in the afterlife.

The morbid tweet included a coffin emoji, the pun "Brentford ‘Till I Die" and a photo of senior fans with a player.

Wash and go (away from our screens forever please)

I wish I hadn’t watched Hull midfielder Jimmy Bullard’s spoof of a 1980s Wash & Go ad, because those shower scenes I desperately want to forget will now forever be imprinted on my brain.

Paired with the poor quality of the footage and the strange random shots of men being doused in water, the outcome of this P&G spot is a total fail.

Instead of assuming the role of the wronged man, Luis Suarez owns the cheating tactics he has often been accused of on the pitch, from pushing to diving, in a series of cringeworthy spots for Uruguayan financial services brand Abitab.

Though his acting is applaudable (perhaps because bending the rules is so authentic to him), it only brings back painful memories of Suarez biting Giorgio Chiellini in the 2014 World Cup, leaving Italy behind and dented, literally, and Uruguay progressing.

Fernando Torres proudly starts this Samsung spot, declaring "I can do this", with cutaways of his kick-ups skills.

Then, perhaps inspired by Pampers’ "I can do it too with Kandoo" motto, the Chelsea striker announces "I can do this too", before grabbing and whipping together random ingredients.

And voila, a cupcake appears.

Now, I’m not doubting Torres' prowess in the kitchen. But I am left questioning the link between Torres, Samsung, the random phone-call halfway through the film and these "perfect" cupcakes.

Gary Lineker's prolific output for Walkers over the decades has produced plenty of highs and lows. However annoying the BBC pundit can be, I think gagging and tying him upside down in a lift makes for uncomfortable viewing – and could be triggering for those who have experienced bullying or attempted suicide.

The 2016 Walkers Bugles film was selected for Turkey of the Week with Campaign’s Simon Gwynn commenting: "The witchlike tormentors didn’t so much make me want to eat crunchy corn snacks as sit in a darkened room and scream."

As brand ambassador for The First Group, Michael Owen offers a 7-minute in-depth tour of Dubai from his helicopter. All the while looking like a child who has been forced to perform in the school play.

If you look close enough, you can see the football legend’s eyes move left to right as he reads his autocues. Awkward.

Football player turned pundit, John Barnes, stars in this strange spot by Just Eat that sees his face being licked by fans. Really.

The work was to promote the food delivery service's limited edition plates for the 2018 World Cup that featured pictures of footballers, so that "you too can lick the face of a legend".

What is Rooney actually saying?

Now, it probably doesn’t help that I don’t understand a word of what Wayne Rooney is saying in this spot (in his 48 seconds on screen he is looking away from the camera and mumbling) but the former Manchester United striker gives Owen a run for his money in the award for monotonous acting.

A noteworthy mention goes to Manchester United players for this alternative film to flog tomato juice. The 30 seconds of men slurping is oddly satisfying.

Get impregnated for free Whoppers 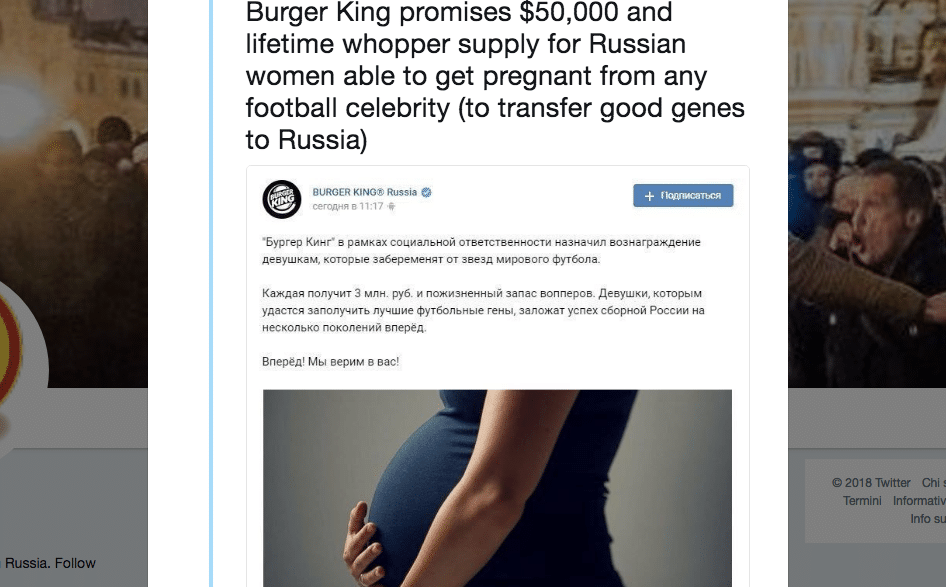 Yes, you read that right.

During the 2018 World Cup, Burger King announced on social media it was offering Russian women who get pregnant by World Cup players a free lifetime supply of Whoppers.

After receiving widespread backlash online, the fast-food giant pulled the promotional posts – which promised a reward to women who get "the best football genes" – from its feeds.

Burger King also issued a formal apology for the post that promoted sex with foreign soccer players, which read: "We are sorry about the clearly offensive promotion that the team in Russia launched online.

"It certainly does not reflect our brand or our values and we are taking steps to ensure this type of activity does not happen again."

What did I just watch?

His attempt at holding on to the small amount of dignity he has left is hilarious: instead of using the Japanese facial exercise product as intended (apparently in the mouth, while bobbing your head), instead he does some headers and then holds the odd-looking thing below his chin while beaming from ear to ear.

The sex-toy lookalike device must have said something really funny because Ronaldo can’t stop laughing at it. Cringe.

Paddy Power enters the world of publishing with Pitch Invader

Five of the best football activations