Fake news is more than a new catch phrase. It's changing the way journalists are reporting stories today, says a new survey by Ogilvy Media Influence.

The disintegration of media walls and advanced digital technology have given the public more access to information and the ability to customize content to fit their individual preferences. As a result, more people are choosing where and how to get information.

Today, much of that information is funneled through social media, so it’s no surprise that in every part of the world, journalists say it’s the biggest contributor to the rise of fake news. The fragmented media environment has exposed brands to a level of cynicism and distrust unlike any we’ve ever seen. Reliability and authenticity are now among the most valuable assets that brands possess. 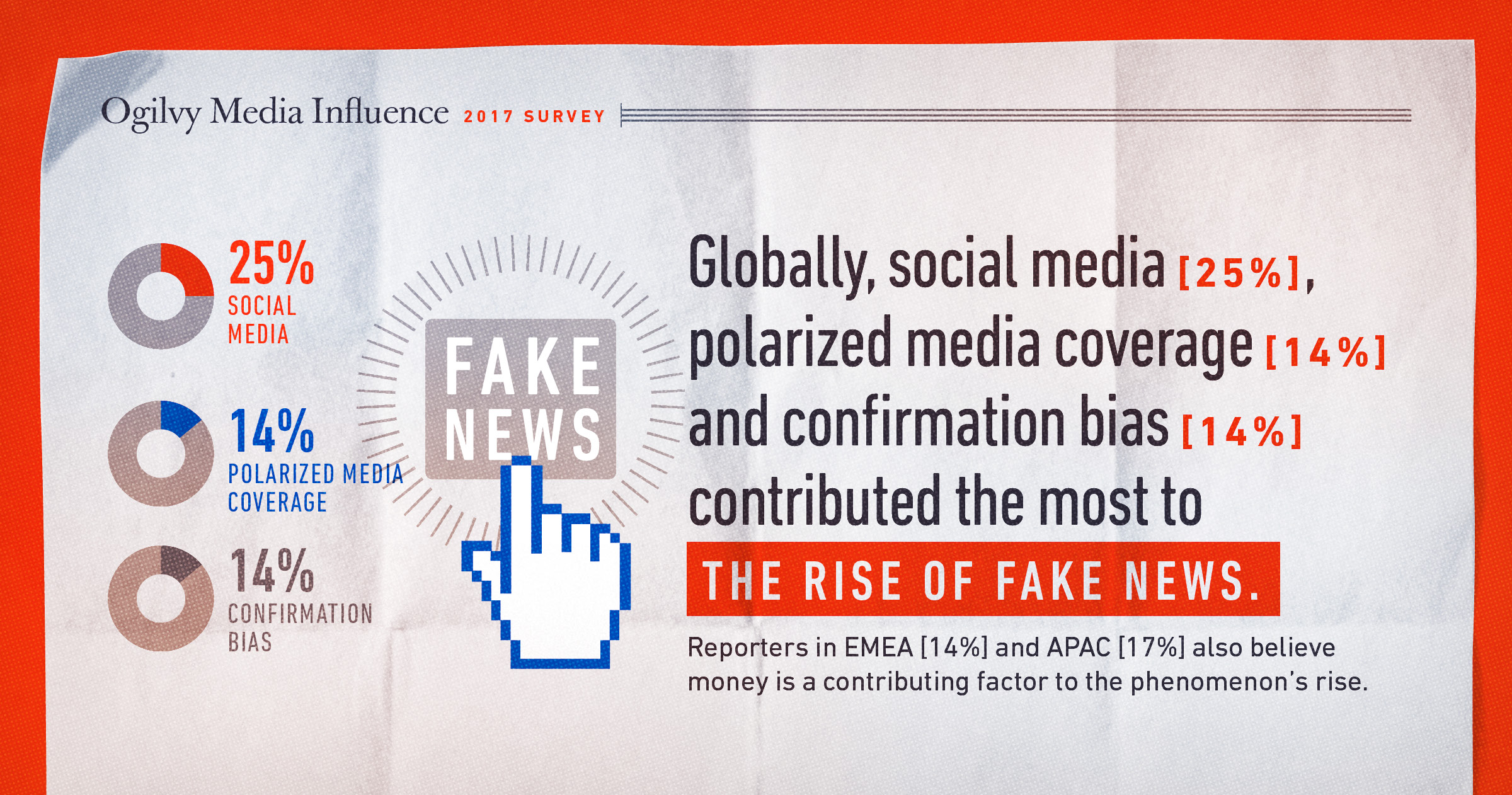 "Fake news" is more than a new catch phrase. It’s changing the way journalists are reporting stories today, according to findings from part two of the Ogilvy Media Influence 2017 survey of top-tier international media. The survey shows that journalists are doubling down on their reporting strategies to ensure they remain a trusted news source—and it seems to be working. More than half of journalists worldwide (52 percent) find traditional media, including newspapers, newswires and magazines, the most trusted news sources today.

But how is the industry responding to the rise of fake news? Traditional media are taking an even more ardent approach to their reporting to strengthen their level of trust. Take the Wall Street Journal for example. In late July 2017, Editor Gerard Baker reportedly sent an email to the staff highlighting findings from a recent opinion poll commissioned by The Economist of 1,500 Americans who were asked about media trustworthiness. While the results showed that media trustworthiness declined over the last few months, overall, Americans put more trust in specific media than in the president. Based on the poll results, Baker encouraged staff to "remain vigilant and to rededicate ourselves to our obligation to be truly objective, so we continue to earn that faith, and our reputation as the most trusted major news organization in America."

Additionally, experts also are beginning to use advanced technology, like artificial intelligence, to help to weed out malicious or substandard content. According to recent reports, Facebook has stepped up efforts to reduce the presence of misinformation by rolling out its "related articles" feature in the U.S., which shows users a cluster of other articles on the same topic when popular links appear in their feeds. Facebook also is partnering with fact-checking experts like Snopes.com to label fake stories as "disputed" based on a database of dubious news articles. 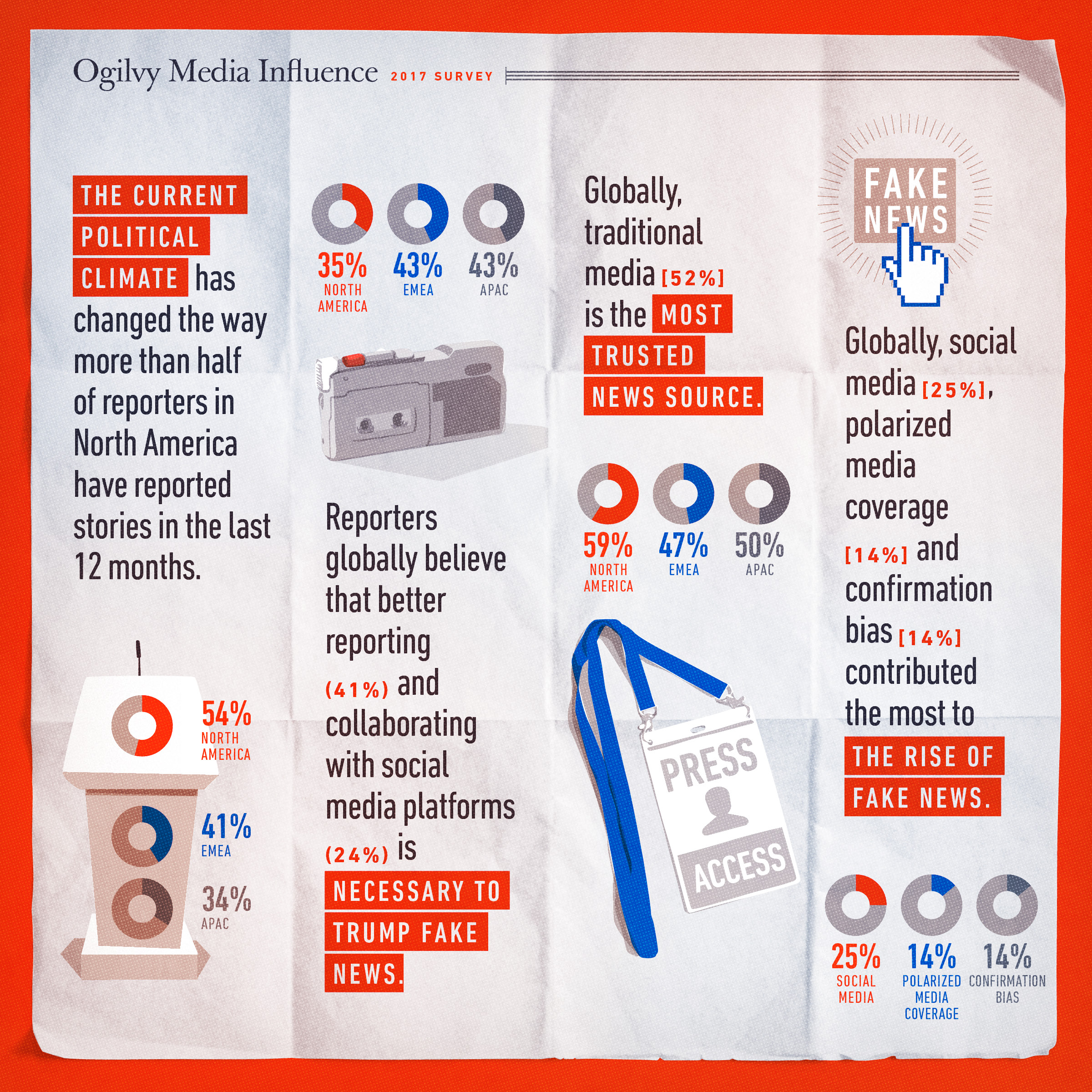 In addition to a fractured media environment, the international political climate has also played a role in reshaping the new media landscape. Unexpected political upsets like the 2016 U.S. election and Brexit have contributed to a hyperpolarized media atmosphere, which has become a virtual breeding ground for fake stories. The OMI survey showed that the current political climate has changed the way 54 percent of journalists in North America have reported stories in the last 12 months. More than a third of the journalists in both EMEA (41 percent) and Asia Pacific (34 percent) said they have changed their reporting practices as a result of the current political atmosphere.

Across all regions, 41 percent of journalists in the survey indicate that better reporting is one of the best ways to combat fake news. That means journalists are becoming more vigilant about fact checking, citing credible sources and being fully transparent in their reporting process. About a quarter cite collaborations with social media platforms as a necessary step to authenticate news reports. To increase consumer confidence, brands will not only need to emulate the increased veracity being implemented by media, they will need to ensure they are relying solely on those outlets that have demonstrated the highest level of credibility to tell their stories.

The fake news phenomenon has increased scrutiny and raised the standards for reporting today—widening the threshold for brand trust among consumers. Traditional media is stepping up to do its part to combat misinformation. Brands must demonstrate the same commitment to truthfulness and reliability to establish and retain consumer confidence. One of the most important things we can do as an agency is help clients navigate today’s splintered media landscape and counsel them on where and how to position their brands to best tell their stories. Fake news erodes trust. That’s a valuable commodity that brands simply cannot afford to lose.

Building a brand with purpose

After an agency settles a false advertising suit, how scared should the industry be of the FTC?

McDonald's CMO: 'We suffered from fake news long before Trump'