For the last week, Jews around the world have been lighting menorahs, cooking with their families, and playing dreidel in celebration of Hanukkah. The yearly holiday was not celebrated widely in the U.S. until the 1970s, and although it’s not really Jewish Christmas, the parallels—gifts, wintertime, lots of food—can lead advertisers who want to take advantage of the holiday down paths of misunderstanding.

"Sometimes people think throwing in a menorah or a Star of David makes their ad Jewish," said Joseph Jacobs CEO Elie Rosenfeld. "But all that shows is that you really don’t know the market, because it’s more about the cultural references."

Founded in 1919, the firm works with clients—mostly CPG, though not entirely—trying to reach a Jewish market. They also work on campaigns for Jewish brands trying to branch out, like a recent push by Manischewitz to compete in general grocery categories. Print ads usually land in regional Jewish periodicals, with digital and social components targeted at Jewish consumers online.

Hanukkah is a more cultural- and community-focused holiday than something like Passover or Rosh Hashana, which are about ritual and religious observance. To successfully appeal to Jewish consumers, said Rosenfeld, a brand needs to demonstrate that it understands these nuances of how Jews spend their time during the Festival of Lights. "You don't need to remind someone that they should light Hanukkah candles, or how to light the candles," Rosenfeld said. "We try to make it more about fun and making it look natural."

That means correctly pinpointing a product’s role in the holiday, without overselling the holiday tie-in. For Breakstone’s Butter, Joseph Jacobs is running print and digital ads focused on butter as an ingredient for baking Hanukkah cookies. For Breakstone’s sour cream (a separate company from the butter producer), it’s about the condiment’s near-ubiquitous presence alongside latkes. "It’s a national brand that has mass appeal, but understands that at certain times of the year, their product is very Jewish," said Rosenfeld. 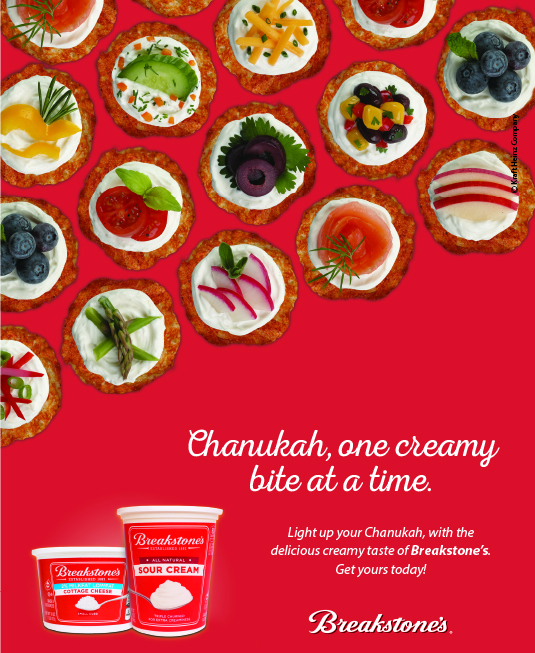 By appealing to Jewish consumers during the holiday, a national brand like either Breakstone’s builds loyalty attached to a meaningful tradition, so that even at other times of the year Jewish consumers might buy that brand to stock their refrigerators. "Especially with younger consumers, who may not be as brand-loyal as their parents, we’re reintroducing them and reminding them that these national brands have heritage at the holiday table," Rosenfeld said. With CPG brands, this appeal to the Jewish market does double duty, since grocery store buyers will also take note of brands that Jewish customers will recognize.

But even if a brand understands everything there is to know about a holiday, it’s not enough to successfully tap into the Jewish market, which is highly segmented along lines of observance and sect. Joseph Jacobs might run the same creative across buys at varying publications, but change some of the copy to Hebrew for a Modern Orthodox magazine while leaving it all in English for less observant audiences. In an ultra-Orthodox periodical, they wouldn’t even run a Breakstone’s ad, since that community has much stricter guidelines for kosher certification and only buys specifically Jewish brands.

Even though the Jewish market is a relatively narrow one—only about 2 percent of Americans—it is, like other cultural groups, sensitive to misunderstanding of traditions and identity. Joseph Jacobs has been around since well before multicultural agencies existed, but that’s essentially what it is, and Rosenfeld said their narrow but deep focus is what’s kept them in business for nearly a century.

"Think about the one house on the block with a menorah in the window when everyone else has Christmas trees," he said. "When that family sees a brand talk to them in their language, about their culture—it's something they don't forget."

Six spots from advertisers who didn't forget that Thanksgiving exists