Verizon attempts to win over consumers in the mobile carrier's Twitter replies.

On Monday night, Tim Armstrong, CEO of Verizon-owned AOL, announced on Twitter that Verizon will introduce a new umbrella company called Oath for its 25 media and technology brands this summer. It didn’t take long for the internet to mock the announcement, saying it sounded like the name of a heavy metal band or comparing it to Tribune Publishing’s name change to "Tronc" last year.

But it was John Legere, CEO of T-Mobile, who spun the jeers and Armstrong’s own #TaketheOath hashtag into a "game" on Twitter, asking for tweeters to come up with humorous takes on what other "oaths" Verizon will be taking, and would reward his favorites with prizes. Legere initiated the taunts with the tweet: "Knowing Verizon, we all know the kind of oath they’ll be taking…The oath to treat you like (insert poop emoji).

Let’s make this a fun game, shall we?? Tell me what you think what other #VerizonOath they’ll be taking now! My favorites get a prize. ;) https://t.co/sMI047qmzj

His request generated 368 replies of tweets slamming Verizon for past failures and individual disappointments while using the hashtag #VerizonOath.

@JohnLegere Verizon should take an oath to update their logo so you know no matter what they say, things aren't what they seem! #VerizonOath pic.twitter.com/rZhMVgQaLS

@JohnLegere Their oath is that they'll do their best to not have this as their new slogan. Or maybe they'll turn the mashup into a spyware app. ;) pic.twitter.com/ZzHsefFlRg

Although it’s not clear what prizes Legere gave out, he did compile of a variety of responses he received into a blog post on the company’s website. 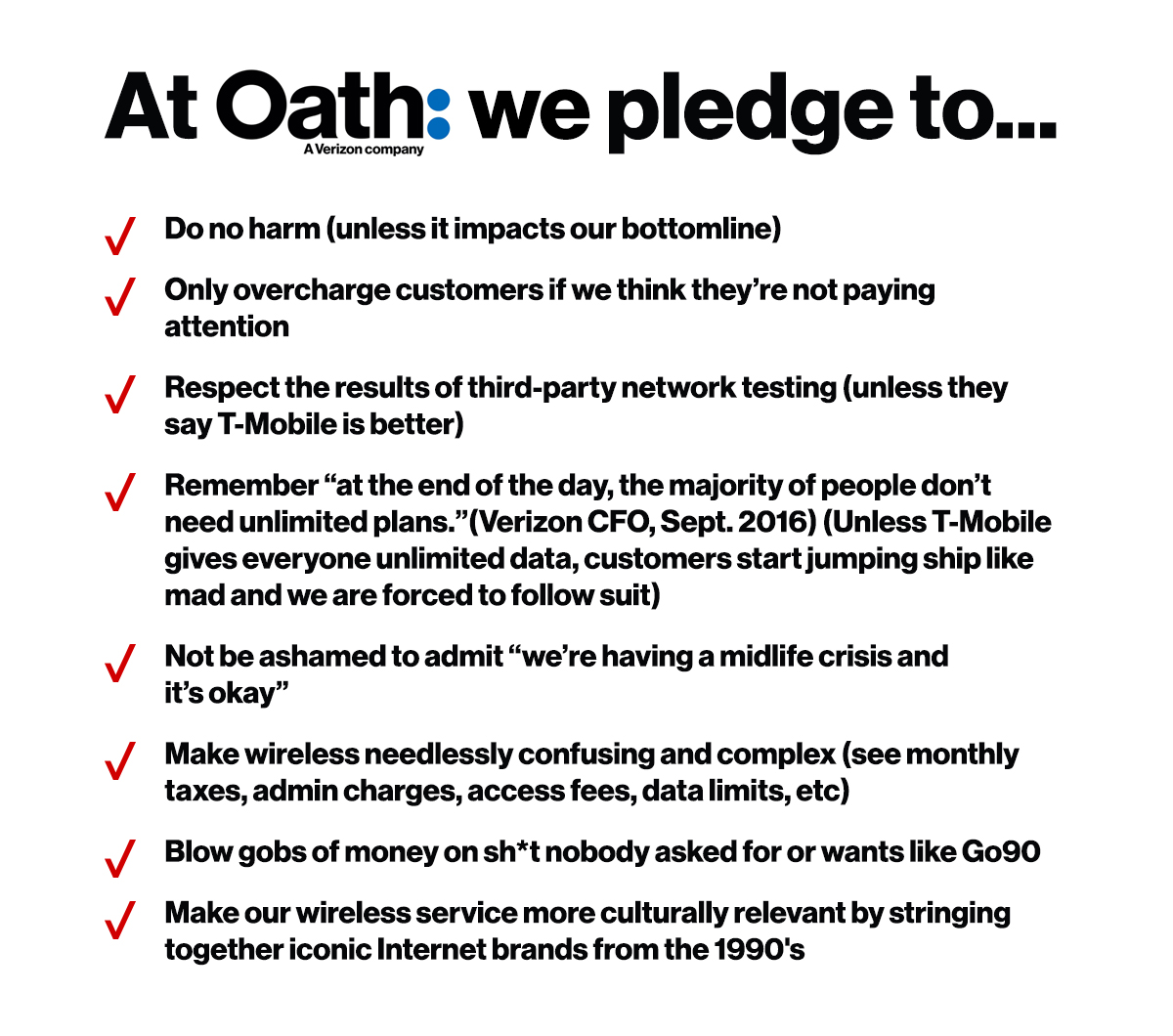 Verizon was then spurred to fight back in the replies that Legere received, trying to convince consumers to switch to them. For instance, after one consumer wrote that he didn’t know whether to buy a T-Mobile phone or not, Verizon wrote back, "We would love to get you a new phone with us!" Verizon has not replied to requests for comment.

@Gsorrito We would love to get you a new phone with us! Do you have a device in mind? *DJY

"Our competitors have a habit of serving up material that is too good to pass up," said Janice Kapner, T-Mobile's SVP of corporate communications, in an email. "Our CEO, John Legere has never been afraid to speak his mind or share his thoughts, and this is no different. Like most of the internet, he saw the irony in Verizon’s naming choice, so he called them out … yet again!"