Forget Silicon Valley and Hollywood. The biggest challenge to talent retention in adland may be lousy morale.

The first annual Campaign US survey on morale in the advertising industry reveals that employees working for companies they classify as having low morale are 3.5 times more likely to be job-hunting than those who work at companies that they say have high morale. 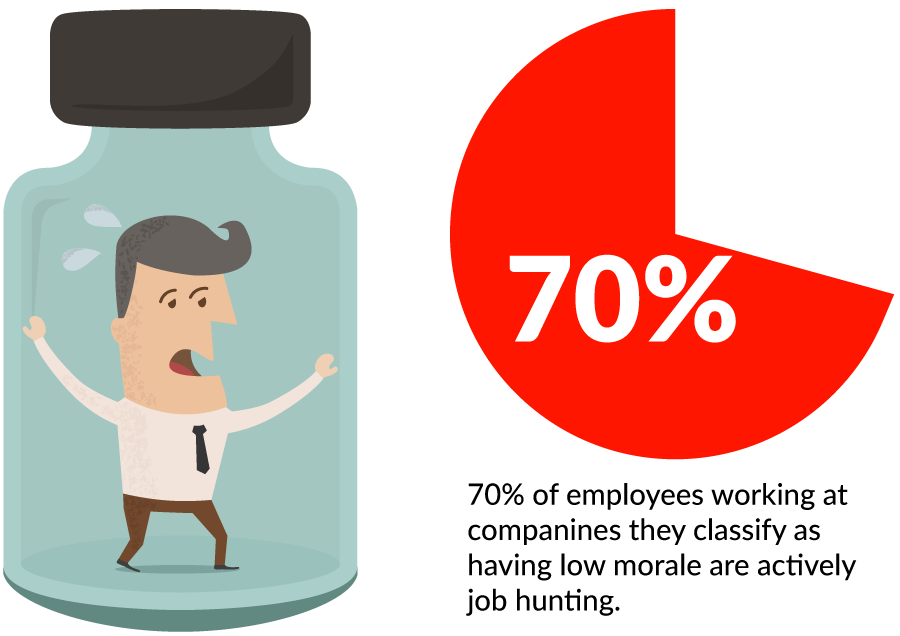 Overall, more than one-third of the survey’s 211 respondents — 37% — rated morale at their company as low or dangerously low, while only 29% said it was good or very good. Thirty-four percent said it was satisfactory. 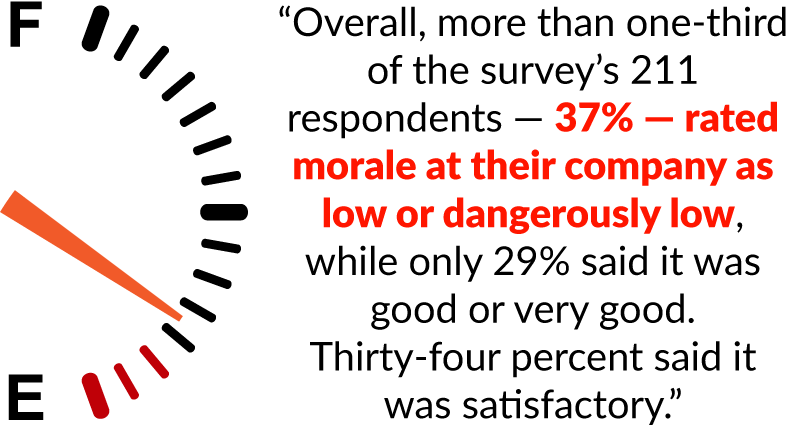 And there is evidence the mood is worsening: Fifty-eight percent said morale at their company is lower now than it was one year ago.

"Too many people consider morale a touchy-feely issue," said Douglas Quenqua, editor-in-chief of Campaign US, "but studies show that morale can affect productivity and talent retention. People want to be inspired at work, and I think that goes double for people in creative industries. Employees who feel inspired aren’t daydreaming about that next job."

"Ego-driven, self-fulfilling, all-about-me attitudes," said one respondent on reasons for low morale at his or her company.

"Politics and sexism," said another.

"Working in print media," said one respondent. "We are the Titanic."

The factor most commonly contributing to good morale was work-life balance, followed closely by satisfaction with work. Salaries were a distant third.

Jay Haines, founding partner at GraceBlue, a global executive search firm for marketing and communications companies, noted that the findings reflected an emerging emphasis on culture and leadership among today’s creative workers.

"If you look at the reasons for morale being low, three of the four can be fixed by high-engagement leadership, personal care and vision for the organization," said Haines, who was not involved in the survey. "The work-life balance question only becomes an issue when the leadership or purpose of the company is lacking,"

"In companies where those are strong and the culture is rock solid, the number of hours worked and the balance with home life becomes almost an irrelevance," he added. "If people feel they are on a path and are really part of the creation of something special, they are happy to commit entirely — but leaders have to create that emotional engagement for that to happen.’ 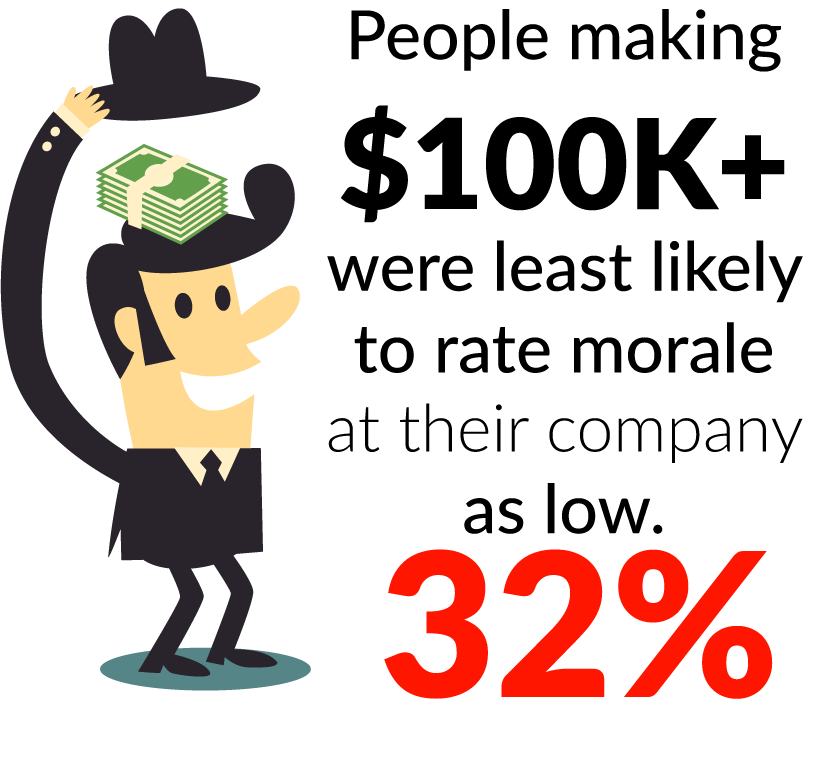 But the survey offered evidence that salary may be a greater factor than people admit. Respondents with a salary of $100,000 or more were least likely to rate morale at their company as low (32%). Those making between $50,000 and $100,000 were most likely (40%) to do so. In the middle were people making less than $50,000 a year or less (35%). There was virtually no correlation between morale and the number of years someone had been working in the industry.

Still, the sense of frustration with leadership — and the lack of patience among employees to bear with an unhappy situation — were made clear. Employers looking to retain good talent should prioritize culture and morale, Haines said.

"If you can make people love you as a leader and love the company for which they work, you are a long way home," he said, "and the issues becomes ones of managing growth, not of morale,"

Thirty-four percent of respondents said they worked for a creative agency, 23% for an in-house agency, 16% for a brand, 11% for a media agency and 11% for a publisher. Six percent identified as freelancers. 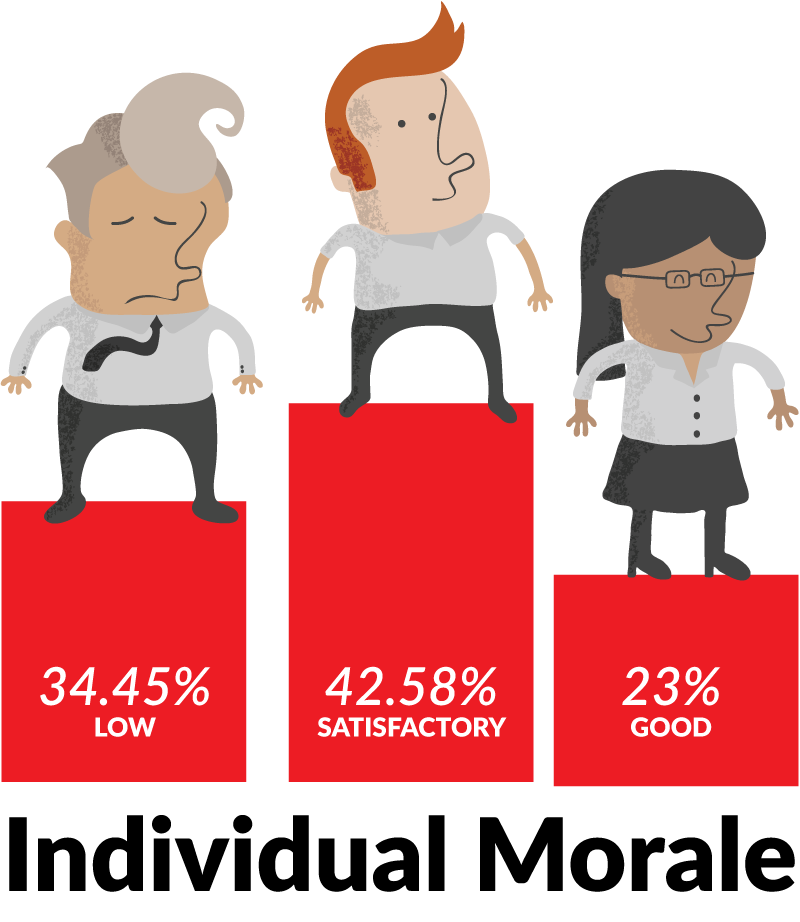 The survey ran online throughout August 2015. Some categories may not equal 100% because not all respondents answered every question.

Nine things you need to know before going freelance

Is Formula 1 sponsorship a fast track to Asian hearts?

The trillion-dollar question: Can Facebook's virtual assistant succeed where others have failed?

Putting yourself out there: How to find the perfect mentor

Does the advertising industry have a morale problem?