The Sun's unofficial coverage of Love Island has allowed the newspaper to piggyback on the success of the ITV reality show, with traffic shooting up 11% during ad breaks.

Thesun.co.uk, which attracts about 30 million readers every month, has become a magnet for Love Island viewers wanting to gain an inside track and gossip on this year's contestants, in spite of not being involved with the show in any official capacity.

According to publisher News UK, Google Analytics proves the efficacy of The Sun's coverage, with online traffic peaking at an average of 11% growth as the ads run on ITV2. Content is also publicised via the news title's Love Island WhatsApp account, which flags news to viewers who have signed up. 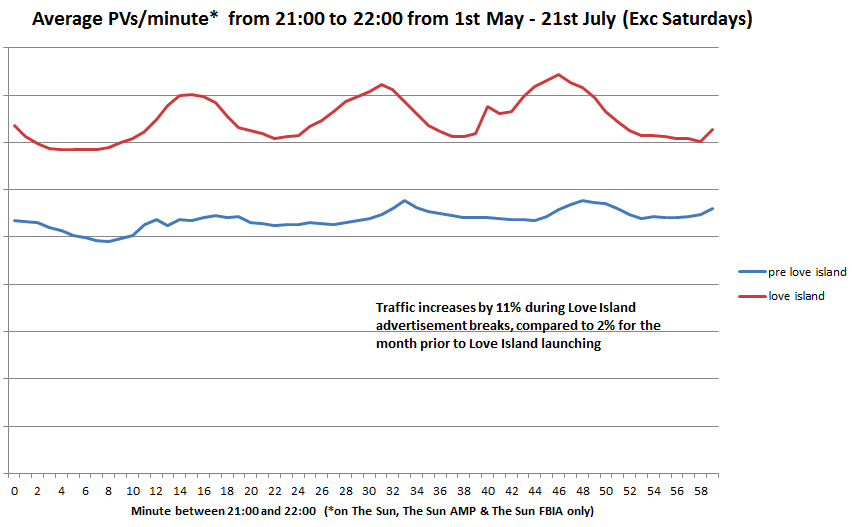 Keith Poole, The Sun's digital editor, said: "We are the unofficial second home of the show and have been leading the Love Island discussion since it rose to popularity. We cover every inch of the story, from what the contestants are wearing that night to insider stories on the Islanders – including that DM from Curtis to Maura – to the first tell-all interviews.

"It’s like the electricity surge Britain sees during football World Cups, when people rush to the kettle. The ads come on and everyone’s picking up their phone to get some post-match analysis and gossip, and are reading and sharing the latest stories from us on the island."

Love Island will climax later tonight, with ITV2 transmitting the final at 9pm. The show is a big revenue driver for the broadcaster – last week, it announced that it would be airing two series a year from 2020, thanks to better-than-expected ad sales. It has earned an extra £8m from commercial partnerships on this year's series.

The Sun is also running a campaign for Diet Coke alongside its Love Island content. It has been embedding interactive polls and predictor games into stories, allowing it to glean insights into viewer attitudes and habits. Questions such as "Do you count calories in your food?" allow the publisher to enrich its knowledge of readers. Predictor games, meanwhile, ask readers to vote on what they think will happen during the show and they are encouraged to enter a prize draw.

Paul Hood, The Sun's digital marketing director, said: "Not only are we growing our audience through our brilliant Love Island content, we are also getting to know them better. We’re giving them the chance to engage and interact beyond purely consuming content and, in return, they share more about their preferences or their credentials.

"We’re building a really clear picture of who this audience is, how they consume and what they want."

Thesun.co.uk has broken a number of stories about the show, including that Amy Hart would be quitting the villa and a kiss between Anna Vakili and Ovie Soko. It also ran the first interviews with former contestants Hart and Sherif Lanre.