The Sun has today (13 July) published its first-ever cover wrap after striking a deal with Sky and Eurosport, which have taken over the front and back pages of the country's best-selling tabloid.

The cover wrap mimics the front page and back page of The Sun, complete with the paper's masthead, including today's date and 40p cover price on the front.

It advertises a joint campaign between Sky and Eurosport, promoting Eurosport's Olympic coverage, which will be available to Sky 3D customers . The Sun's parent company News Corporation owns a 39% stake in Sky.

Critics of cover wraps would argue that their use indicates that editorial is ceding too much ground to commercial. Some customers throw them away.

But the reality is that fewer and fewer people are reading newspapers, so newspaper commercial executives are being forced to publish an increasing number of different advertising formats, such as  cover wraps, to prop up their revenues.

The Daily Express and the Daily Telegraph have both previously published cover wraps.

No financial details of the deal have been disclosed. 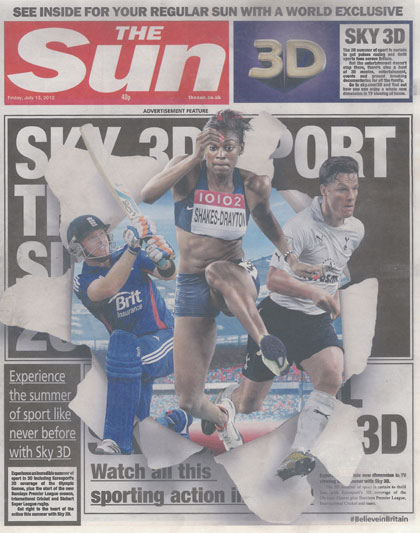