The fast-casual chain is betting on "lifestyle" to stand out in a crowded market.

The Japanese native has become a fixture of the contest, along with "Jackass" actor Jason "Wee Man" Acuña, who owns a Chronic Tacos franchise and competes in the amateur division. Kobayashi didn't beat his 2015 record of 140 tacos in 10 minutes at the Las Vegas competition this year, but he did help usher in Chronic Tacos' new location at The Palms.

While West Coasters know the California-Mexican, fast casual chain well, other Americans are introduced to Chronic Tacos through news-making events like this. It's all part of the 14-year-old brand's strategy to connect with customers as a lifestyle brand. Sure, the food is authentic (family recipes dating back three generations) and healthy (no GMOs), but accolades of tasty tacos only travel so far.

Instead, Chronic Tacos, which doesn't advertise but works with Blaze PR, taps into alternative culture to help spread the word. Its T-shirts and hats exude a cool factor with Day of the Dead designs and are "something that you'd want to wear anyway," said Michael Mohammed, CEO of Chronic Tacos. Graffiti artists paint the restaurants' murals, and this year, Chronic Tacos was a main sponsor of California's alterative rock festival Chain Fest. And don't think even think of asking for a bottle of regular, old Tabasco sauce to top your taco. Instead, reach for Gringo Bandito, the hot sauce owned by The Offspring frontman Dexter Holland. Yeah, Chronic Taco has street cred. 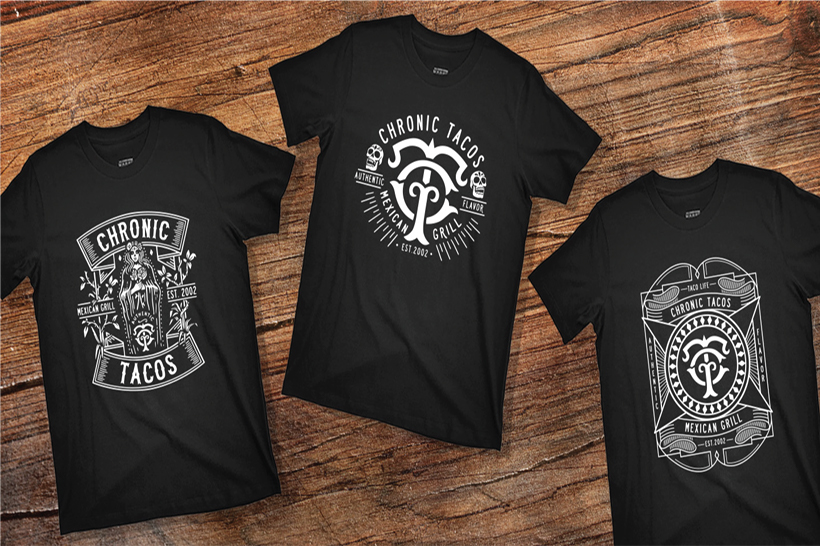 Chronic Tacos wasn't created in a boardroom "with a bunch of executives who decided, 'Hey, we're going to be this cool California brand,'" Mohammed said. It began when two buddies, Randall L. Wyner and Daniel A. Biello, had the munchies and couldn't find any good, local Mexican joints in Newport Beach, Calif. "The name 'Chronic' obviously started with weed, and it became a strain that was known for its high quality," he said. "We kind of just played with that and attached it to tacos."

Since 2002, Chronic Tacos has expanded from its original Newport Beach location to 40 locations today. Most restaurants are in California, but the brand has a presence in Alabama, Arizona, Colorado, Florida, Nevada, North Carolina, Utah, Washington and even Canada. The nationwide growth began soon after 2012, when Mohammed and his three brothers, as part of family-owned Calivan Enterprises, bought the chain from Wyner and Biello.

"This was a perfect fit for us," Mohammed said. "We didn't have restaurant experience, which I think in some ways benefited us because we took a different approach to things; we really focused on the brand." They plan to open another 20 locations in 2017.

Yet when Chronic Tacos opens a new location, there is typically a line out the door. That's because the brand makes a lot of noise around its restaurant launches, with proceeds going to local charities like Boys and Girls Clubs of America, No Kid Hungry and ECO-Warrior Foundation. Acuña is often present, touting the events to his over 1 million social media followers, and it also helps that the first handful of guests are promised one free taco weekly for a year. And sometimes, Chronic Tacos will time one of its infamous taco-eating contests to a launch, like it did in Las Vegas.

"We look at it beyond just a restaurant. We feel that we're kind of a lifestyle brand," Mohammed said. "I think that Mexican food segment is a very strong segment. There are plenty of brands playing in this field, but I don't think it's as crowded as pizza and burgers at this point. Where we feel we're going to succeed is in our uniqueness."

That's one area in which Riggs agrees. "Restaurant operators are going to have to come up with a compelling reason to get consumers to visit restaurants more," she said.

If authentic, California-Mexican tacos made fresh when you order them aren't enough, Chronic Tacos believes its professional eating contests, edgy merchandise and celebrity partnerships will get customers through the door.

"At the end of the day, the taco-eating contest is really about getting our name out," Mohammed said. "The event starts to become a part of who you are, so to not do it wouldn't make a lot of sense because it's something that people now look forward to."