Health messaging is front and centre in latest phase of long-running smoking-cessation drive.

A bunch of dead flowers juxtaposed with a fresh bouquet is the powerful image used in a new campaign to warn of the dangers of smoking, launched today (Wednesday).

The latest iteration of Public Health England’s Stoptober campaign, now in its ninth year, has gone back to basics, reinforcing the core message that smoking is bad for your health.

It is in stark contrast to last year’s work, which focused on the relationship between smokers and cigarettes, and encouraged people to "split up" with smoking. The 2019 activity featured films of people talking to giant cigarettes about why they needed to "end" the relationship.

A more direct approach has been taken in this year's campaign, created by M&C Saatchi, with a pair of lungs represented by two bouquets of flowers – one that is dead and shrivelled, and the other full of life.

A short film depicts a brown, tar-sodden bouquet turning back into fresh flowers to show the benefits of giving up smoking.

Ben Golik, chief creative officer at M&C Saatchi, said: “Simplicity always wins out. This campaign uses striking visuals to show both the damage of smoking and the benefits of quitting – the two most powerful levers we can pull.

"Harm and hope blend into a single visual story focused on the lungs. And in a year we have never been more aware of the dangers to our lungs, it’s a powerful and pertinent metaphor.”

The campaign is running under the umbrella branding of "Better health", the general behaviour-change campaign launched by PHE in July.

The latest work calls on viewers to think about the damage smoking does to their lungs and give up so that they can "breathe".

A core message is that smokers who quit for 28 days are five times more likely to quit for good.

Now more than ever, ahead of #flu season, is the time to put your lungs first, quit smoking and breathe easier. Try this year’s #Stoptober from on the 1st October and start your quitting journey. pic.twitter.com/rWUkoZQ7ig

A PHE spokesperson said: “The campaign hasn’t specifically referenced Covid-19, but has made reference to the fact that smoking damages the lungs and airways, and harms the immune system, leaving us more vulnerable to infections.

“It notes that smokers generally have an increased risk of contracting respiratory infections and experiencing more severe symptoms, and that stopping smoking brings immediate benefits to health, including for people with an existing smoking-related disease.”

PHE hopes the campaign will capitalise on a surge in smokers who are quitting. More than a million people in the UK have stopped smoking since the pandemic hit, according to Action on Smoking and Health.

More than two million smokers have tried to give up since Stoptober launched nearly a decade ago, according to PHE.

And while smoking prevalence among adults in England is at a record low of 13.9%, some 6.1 million people continue to smoke.

The campaign will include social media, radio, press, out-of-home and video-on-demand activity.

Freuds, M&C Saatchi, Wavemaker, OmniGov, 23Red and Parkhouse have worked together on the activity.

It is being backed by partnerships with health and anti-smoking charities, as well as Amazon, Superdrug and Boots, among others.

Some £1m is being spent on this year’s campaign, which is targeting smokers aged 35-60, as well as those in the 18-34 age group, because there has been a rise in smoking among this demographic during the pandemic.

The communications around the campaign will draw on latest statistics on smoking prevalence, human-interest case studies – such as TV presenter Kate Thornton and DJ Scott Mills, who are both quitting smoking to coincide with the campaign – and advice from medical experts.

Older smokers are being targeted with a different image, with the lungs represented by mechanical cogs, one set of which is tarnished and rusted, while the other is shiny and clean. 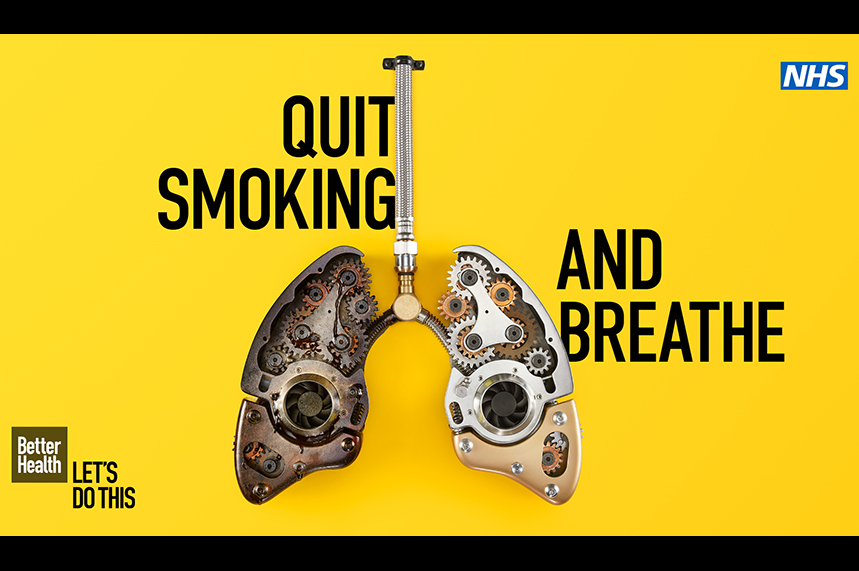 In its campaign pack, PHE stated: “The ‘cogs’ lung image has been developed as an alternative creative you can use to promote Stoptober. We know from testing that this creative is particularly effective in engaging an older audience.”

The work's effectiveness will be measured by survey data tracking the percentage of smokers who have tried to give up as a result of Stoptober, as well as the take-up of PHE’s free quit-smoking tools.

Alexia Clifford, deputy head of marketing at PHE, said: “There’s never been a better time to stop smoking with the wide range of support available to people. Lung health is more important than ever and I hope that this year’s campaign will continue to encourage many more smokers to quit.”

A version of this story first appeared in PRWeek

'It's a wake-up call': how Covid-19 inspired a new public-health brand in eight weeks