Learnings from The New York Times’ The Truth campaign.

Brands are built over time with a good measure of consistency. But the nuance of exactly how that happens is up for debate, as well as the role of culture in shaping brand perception.

Recently, we’ve seen the value of cultural relevance grow, as consumers demand that brands be built on top of shifting social sands. How can marketers balance these demands while building a brand in a consistently fresh way? And what does that activity look like in the brain when it works?

Product innovation and high-quality journalism has undoubtedly played a huge role in this, but other high-quality publishers are being outstripped by the Times’ success.

We believe The Truth campaign has been another contributor to success. Run for the past five years, the campaign seeks to persuade people that the truth is worth paying for, using the power of emotive storytelling to highlight the value of journalism.

To fully understand the power of the campaign, we’d have to look into people’s brains. So we teamed up with Brainsights to analyze people's responses to the campaign over time, using electroencephalography (EEG) to record their non-conscious brainwave activity as they consumed the campaign over its five years running.

We analyzed seven pieces of content from the campaign, alongside three comparable campaigns running at the same time from The Economist, The Wall Street Journal and The Washington Post. The content we looked at included a 2017 campaign highlighting the Times’ photojournalism in the fight against ISIS; another 2017 spot focused on photojournalism and the plight of Syrian refugees; a 2018 spot on the reporting that underpinned the #MeToo movement; a 2019 spot about investigative reporters covering Myanmar’s crackdown on Rohingya Muslims, the Mexican suppression of news media and stories of children separated from their parents at U.S. border crossings; and a 2020 campaign that shows how journalism supported our lives throughout the COVID-19 pandemic.

Almost all of the Times’ pieces strongly outperformed campaigns from other publications and existing Brainsights benchmarks. But the real story is about how each piece maintained consistency while bringing cultural relevance in a fresh creative stylee.

Each iteration of the campaign linked deeply to the cultural concerns of its time, deepening the emotional impact. The “heart chart” below shows that we gradually delivered more impactful moments per second of content as the campaign went along. 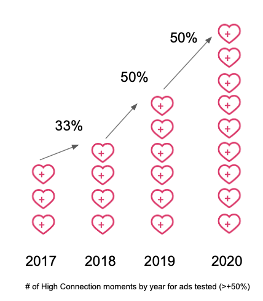 So how can brands maintain creative freshness while building brand consistency over time?

1) Hold a distinctive brand style, but be flexible in execution. The style of this campaign used the tools of investigative journalism — the written word and photography — and took viewers behind the scenes of the Times’ process for investigating, documenting and delivering truth.

Using distinct brand assets, like the familiar New York Times font, and featuring Times journalists, the ads told stories about the individuals behind The Truth, their approaches and personal philosophies, their relentless pursuits, and what it takes to bring high-quality journalism to consumers’ fingertips.

This foundation allowed us to be flexible by executing the campaign through a range of styles — from The Truth Has a Voice, which used the typeface and written word, to Life Needs Truth, which focused on the range of audio and visual outputs of Times journalism.

2) Make choices based on the brand and the business. Throughout the evolution of the campaign, we used data to define the most opportune moments for communication: moments of cultural importance, but also moments that would drive the business forward. By wearing both hats, we were able to drive greater impact, demonstrating the value of building the brand as we went.

3) Use storytelling to build more powerful emotional connections. “The Truth is Hard to Find —Tyler Hicks” opens with a date and a place: October 7, 2015, Lesbos, Greece.

Through Hicks’s photography and voiceover, the viewer experiences his thoughts and feelings as he recalls documenting the harrowing experience of Syrian refugees. The photography sequence ends on the feature image of the story — which the viewer only learns after the camera zooms out to the mobile screenshot of his article in The Times.

In that instant — second 51, when the ad was contextualized and “The Truth” was revealed — was the highest moment of emotional connection we observed in the entire Truth campaign.