They're GREEEEAT. But also some are not.

You’d be wrong to think Ronald McDonald and his Golden Arches is the most memorable brand mascot of all time.

It is actually the Starbucks mermaid, according to a new study.

Crestline research with more than 1,600 respondents revealed the coffee chain has the most memorable mascot, closely followed by Colonel Sanders of KFC and the GEICO gecko.

Meanwhile, those unforgettable brand faces include Coco Pops’ Coco the Monkey, Erin from Esurance and (surprisingly) the Duracell bunny. 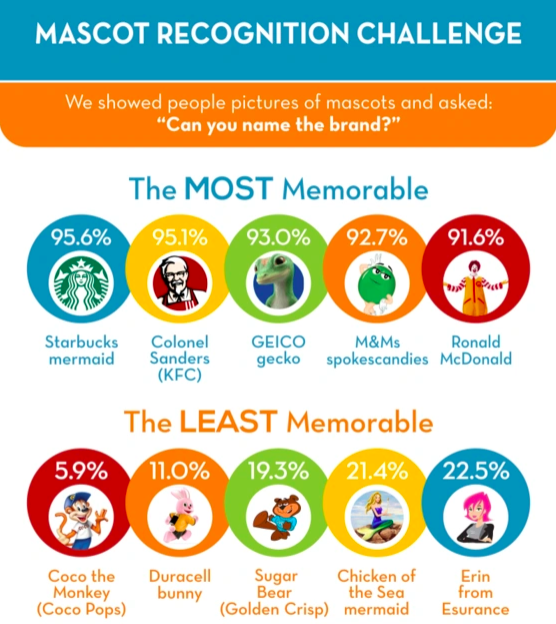 "If there was a golden age of product mascots, it might have been the 1950s and 1960s," part of the study reads. "The media landscape was much simpler then, with print, radio, and television as the dominant vehicles for advertising.

"More brand characters were introduced during that era than in any other. However, social media has revived interest in this type of branding. Many modern mascots have large followings on Twitter and Instagram."

The study found that America’s most lovable mascot is Poppin’ Fresh, the pillsbury Doughboy. Mr Mucus from Mucinex, is the least. He also ranked the least persuasive (M&M candies taking top spot), the least trustworthy (Snuggle Bear from Snuggle fabric softener in first place), the most annoying and the most creepy. But Mr Mucus was not created to be liked, quite the opposite -- so he is a successful mascot in his own right. 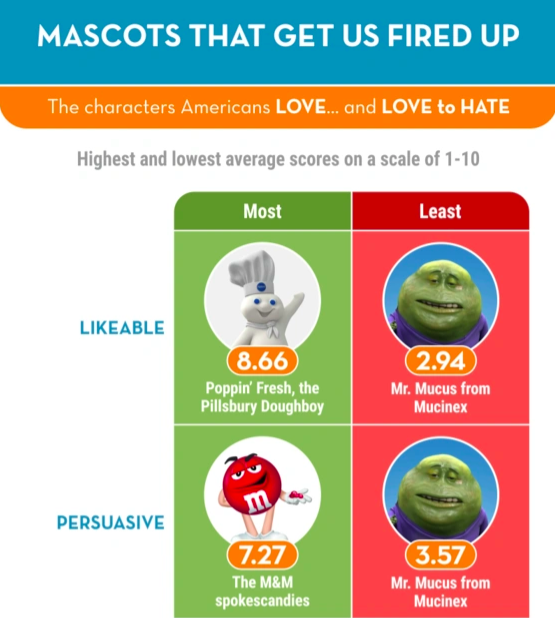 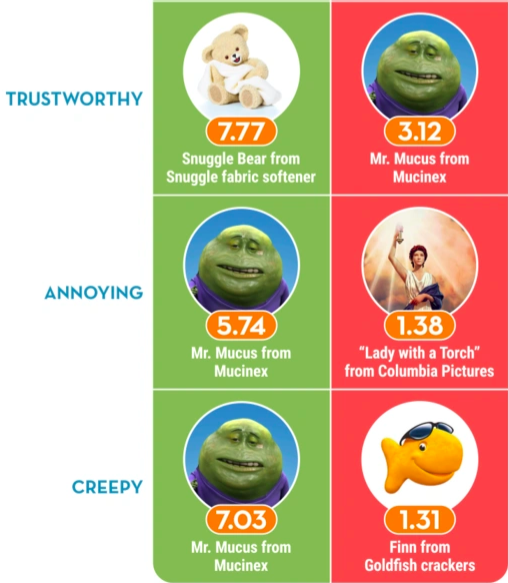 When it comes to cereal, Tony the Tiger is the most liked mascot, while Sonny the Cuckoo Bird from Cocoa Puffs is the least. Tony takes home gold in trustworthiness and persuasiveness, too.

How about those insurance mascots I hear you say? Well, it may not surprise you that fans voted the GEICO gecko highest on the likeable scale. But the company let itself down with the caveman, who ranked least likeable. Insurance’s most annoying brand face is The Aflac duck.

Wendy from Wendy’s topped out as the most likeable fast-food chain. Chuck E. Cheese came in second place and Colonel Sanders in third. The Burger King king is the least likeable, according to the survey. 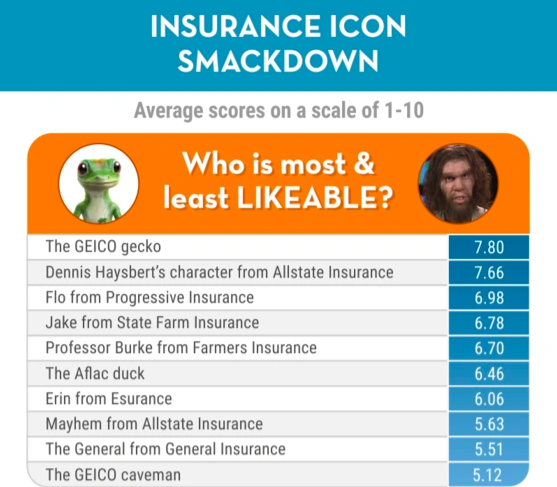 The report concludes: "Mascots are an integral part of marketing. While humans can and do portray brand characters, most companies still favor completely fictional ambassadors.

"Among the advantages: Illustrated mascots don’t age, so they can keep pitching the same product for a century or more. And cartoons, exercising no free will and living no personal lives, aren’t likely to get caught up in scandals that might tarnish a company’s image. (Remember Jared from Subway?) But whether a mascot is fictional or flesh and blood, making a lasting impression on the American public can still be a hit-or-miss proposition. 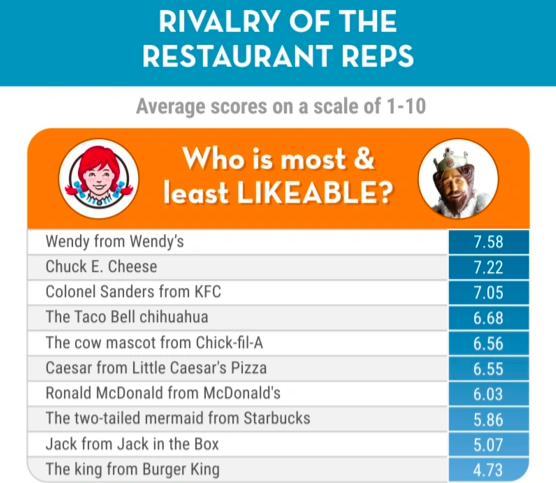 "Many of today’s mascots have been around for a very long time. For instance, the Michelin man debuted in 1898, almost a decade before Henry Ford released the Model T and at a time when tires were white instead of black. Today, 123 years later, he’s still recognized by 80.5% of consumers.

"Connecting with consumers in today’s hyper-saturated media landscape isn’t easy. When it comes to mascots, it’s important to create characters who are likeable, persuasive, and trustworthy -- and are also unique or interesting enough to be remembered."