The first-aid charity's campaign to encourage parents to learn baby CPR included the creation of a babygrow designed to save lives. The work was highly commended in the Power of Partnership category at Campaign's Marketing New Thinking Awards 2017, held in association with Sky Media.

How do you impart complicated information to people who are too afraid to learn? Knowledge a parent needs to remember in a moment of sheer terror when their child is in danger. Knowledge, moreover, that is complex, technical and hard to remember.

This was the challenge St John Ambulance faced when trying to help parents fight their worst fear by teaching them how to perform CPR on their baby.

The solution: to dismantle the fear and ensure the lesson was seen enough, not only through content but in a more permanent way through product. This strategy set the scene for "Nursery Rhyme Inc." – a campaign that included the first babygrow designed to save lives, produced in partnership with Tesco. 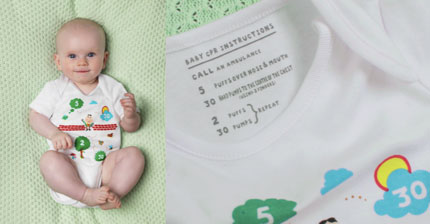 Making a question of life and death palatable

Research conducted by OnePoll on behalf of St John Ambulance in 2015 found that the emergency UK parents fear most is their child stopping breathing (74%). But only 25% of parents said they would know what to do if the worst happened.

The first thing to do was to understand why the majority of parents believed knowing baby CPR was important, but then hadn’t gone on to learn it.

It wasn’t because first aid lessons weren’t available. The issue was emotional, not practical.

New parents are painfully aware they hold their child’s life in their hands and don’t want to be reminded of that fact. So when first aid is framed as life-or-death, parents excused their inertia by reassuring themselves it will never happen to them.

How the charity delivered the baby CPR lesson was therefore crucial: it had to deliver serious knowledge in the guise of fun.

Living in the nursery

Not only did Bartle Bogle Hegarty have to make a scary lesson palatable, it also had to make a complex message memorable. Baby CPR is a complex process to learn:

Unfortunately, it couldn’t simplify the information because it’s medical.

Instead, it needed to tackle the complexity head-on. Giving parents repeated opportunities to learn this lesson was key. The media strategy would be built around frequency, focusing on Facebook, where this could be further increased through sharing.

But it also wanted to build on traditional media, earning a more permanent place in the nursery with an item parents would interact with repeatedly.

The brief was simple: make baby CPR impossible to forget.

The solution would need to:

Together with Tesco, we've created a babygrow that helps teach baby CPR. As demonstrated here by the very talented Baby Lucy #CPRbabygrow pic.twitter.com/gVWaiups5W

The creative idea tackled the complexity of the lesson head-on. The ‘Impossible Nursery Rhyme’ made a humorous virtue of the difficulty of remembering the lesson because it even evaded the key memory tactic of rhyme.

The idea for "Nursery Rhymes Inc." naturally fell into a two-part drama that allowed for a repeated demonstration of baby CPR. In the second film, the nursery rhymers have (more or less) managed to compose a rhyming song, and reprise the demonstration as they sing their catchy, memorable tune.

Getting The Impossible Nursery Rhyme Into Nurseries

The creatives developed a brilliant vehicle for getting the lesson into the nursery: a babygrow that teaches.

Helping parents remember informed every detail of its design, and as well as being informative it was cute – to avoid scaring parents away.

Everybody involved was very excited by the babygrow, but how could they meaningfully get it to market? St John Ambulance needed a partner who could help it successfully make the huge leap from idea to shelf.

It was a big ask, but Tesco immediately saw the value of the idea. Nonetheless, it wasn’t a foregone conclusion that the babygrow was going to get made.

No one had ever used clothing to teach first aid before and, understandably, there was a degree of nervousness about whether it might be a step too far for parents. Would they really want to be reminded that their baby might stop breathing when dressing them?

To find out, BBH commissioned quantitative research with new parents, which allayed any concerns. Armed with this compelling reassurance it was able to bring on board all 12 Tesco departments involved in bringing the babygrow to market.

Ultimately, Tesco generously agreed to produce the babygrows, distribute them at a day-long event at 115 stores, and sell any remaining garments online.

Blogger engagement opened the door to working with Mumsnet, who hosted a Facebook Live event demonstrating baby CPR and publicising the babygrow.

The main criterion for success is how many people were exposed to this life-saving knowledge: 19.4 million people watched the Nursery Rhymes Inc. posts, 5.2 million saw the Baby Lucy film, 31,000 people visited the website to learn more, and 24,000 babygrows have gone to.

The babygrow raised more than £13,900. Fundraising wasn’t the original objective, but this sum could pay to teach 3,475 children first aid

A lot of this visibility was earned rather than paid – the Baby Lucy film took off, with four million organic views less than three days after launch. Parents’ comments told us exactly how welcome the babygrow was.

Moreover, the babygrow generated a huge amount of buzz. The PR push before the event got 177 pieces of coverage in national and regional publications. The Facebook event with Mumsnet was one of its best-performing live events and 13 parenting blogs featured the babygrow. The activity even trended on Facebook.

The babygrow raised more than £13,900. Fundraising wasn’t the original objective, but this sum could pay to teach 3,475 children first aid.

The result St John Ambulance is most proud of, though, is a little boy named Joel. When Joel’s mum Alex told their story in a video for the charity, she said: "If it wasn’t for the Nursery Rhymes advert from St John Ambulance, Joel wouldn’t be here today."

Mother and VCCP clean up at Marketing New Thinking Awards