The UK TV network wanted to create a football fan hub for this year's World Cup in a bid to bring a slice of Brazilian spirit to British shores. The brand's events team worked with sports and event marketing agency Sportcel on the Fever Pitch concept, which was set up at the former Granada Studios site in Manchester for the duration of the football tournament.

The aim of the activation was to ignite football fans' passion for the sport and bring to life the World Cup. An impressive 450 tonnes of sand - the same weight as two Statues of Liberty - was used for the installation, and Arena Seating was tasked with designing and installing three tiered grandstands around the perimeter of the pitch, bringing the capacity to 2,200.

Those attending ITV Fever Pitch were treated to international beach soccer games, a scaled-down replica of Copacabana beach and a High Tempo zone where guests could test out their football skills. England's manager Roy Hodgson was also at the fan park in spirit, in the form of a sand sculpture. Guests could soak up the samba vibe each day at specially created bars and restaurants from Manchester's Bem Brasil, which served up barbecue skewers, chillies and burgers.

During the England versus Uruguay match on 19 June, visitors to Fever Pitch also had the chance to take part in a sensory experience. ITV Events worked with Hometown London on the activation, dubbed the world's first 4D World Cup broadcast, which included aromas being emitted during the screening of the match. Smells from the beaches of Brazil and the Arena de Sao Paulo stadium, as well as the taste of victory in the form of a champagne fragrance, formed part of the experience. Brits also had the chance to vote for English smells in an online poll, including chips by the sea, Sunday roasts and strawberries and cream, with the most popular being released during the pre-match national anthem.

Kia Hanly, head of ITV Events, says the channel wanted to highlight Brazil's vibrancy and emotion within a UK experience.

"The activity fitted with an integrated campaign in which viewers could watch the games on TV, but we wanted to bring it to life and enhance the experience. It has been a golden opportunity for us," she says. 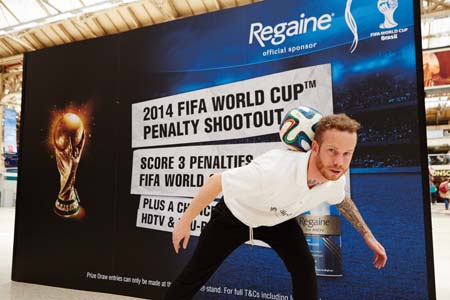 Hair regrowth brand Regaine, part of Johnson & Johnson - an official sponsor of the Fifa World Cup in Brazil - targeted commuters at London railway stations, giving people a chance to test their penalty shoot-out skills and compare them with those of the England football team.

The activity was devised by sports marketing and sponsorship agency Prism, working alongside agency Inkling and set-building company SeTwo as part of Regaine's 'Facts not Fiction' campaign.

Participants at Victoria, Liverpool Street and Waterloo stations were able to put their football knowledge and penalty skills to the test, with top scorers earning the chance to win World Cup prizes. Out of the 2,065 commuters who participated in the Regaine Facts Not Fiction penalty shoot-out sessions, more than 1,156 fans scored a goal - a 56 per cent penalty conversion rate. This compares with England's attempts over the past three World Cup tournaments, which have averaged 50 per cent. Professional football freestyler John Whetton demonstrated his skills to passers-by to drum up interest around the activity.

"Penalty shoot-outs have won and lost dreams the world over and will no doubt play a crucial part in the knock-out stages of this year's World Cup," says Nikki Hayward, assistant brand manager at Johnson & Johsnson, who works on the marketing team for the Regaine brand. 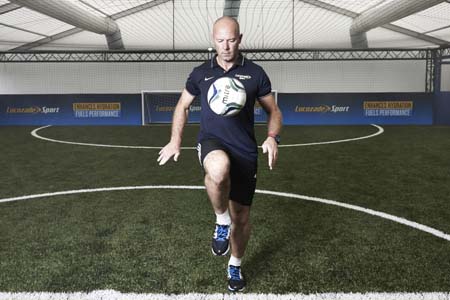 Experiential agency TRO collaborated with creative advertising agency Grey and digital agency Brass to create the Conditions Zone for its long-term client Lucozade Sport, in celebration of the World Cup.

The footballing experience was all about humidity and hydration, as a five-a-side football pitch was housed in a makeshift venue in London's Canary Wharf and heated and humidified to the conditions of England's first ill-fated game in Manaus.

TRO was tasked with creating activity that would educate members of the public on the science behind the energy drink.

"The experience is very heavily focused on science - it's a learning experience that helps participants to perform better," says James Young, head of sponsorship for Lucozade Sport. This concept was reflected throughout the entire Conditions Zone experience.

On arrival, teams were given a radio frequency identification (RFID) wristband, loaded with data about their health and fitness. After changing into Lucozade Sport-branded kits, players' hydration levels were tested by sports scientists through urine tests, and, before play, teams were given a briefing on what exactly would happen to their bodies in the intense conditions.

Photos and statistics of goalscorers and overachievers were displayed on screens outside the pitch during play, and the vital statistics of every participant were monitored throughout the game. When 50 minutes of play were completed, players could compare scores with their peers, as well as participants from other Conditions Zone sessions and professional footballers, before rehydrating themselves with a variety of Lucozade Sport drinks.

The inspiration for the Conditions Zone came from the huge media coverage of how England would perform in the humid Brazilian climate. "We effectively hijacked the news agenda," said Young. "We used our role as a hydration drinks brand to give members of the public the chance to play in the shoes of the national team. By the end of the session they had a much better understanding of hydration."

TRO says the Canary Wharf location was chosen to appeal to the competitive, go-getting nature of City bankers. However, a wide range of players signed up for the fully booked experience, including former England footballer and now pundit John Barnes, as well as representatives from Lucozade's trade partners.

TRO and Lucozade Sport have already started considering the World Cup in 2018. "The next tournament will be held in Russia," says Sion Stansfield, senior account director at TRO. "We can pretty much control the weather on the pitch, so maybe we'll see a freezing cold Conditions Zone with snow in four years' time."