Specsavers has run press and digital ads poking fun at the row over Chelsea footballer Eden Hazard kicking a ball out from under a Swansea ballboy during the Capital One Cup semi-final on Wednesday 23 January.

The ad shows an image of a boy in a vest saying "ball boy" next to a cross, and then below it, the image of a football with a tick and then the optician’s tagline, "Should’ve gone to Specsavers".

It was designed by Specsavers’ in-house team and the campaign was planned and bought by Manning Gottlieb OMD, and is running in national newspapers and online, including through a promoted Tweet.

The print ad is running in The Times, The Daily Telegraph, The Guardian, The Independent, i, the Daily Mail, the Daily Express, The Sun, the Mirror and the Daily Star.The promoted Tweet is embedded with the press ad and says: "Should’ve gone to Specsavers #ballboy #hazard". This morning the Tweet had been retweeted more than 2,500 times and favourited more than 450 times.

The ad apes much of Specsavers' marketing which shows people making a mistake because they did not see a situation properly and then ends with the tagline: "Should’ve gone to Specsavers."

Specsavers has a long-standing strategy of responding to events in the news, and last year it ran an ad in Ukrainian after a referee disallowed a goal during the Euro 2012 championships in a game between England and co-hosts Ukraine.

That game also involved a Chelsea player, John Terry, who appeared to kick the ball out of goal after it had crossed the line.

During the 2012 Olympic Games, Specsavers took out a press ad based on the mix-up when the South Korean flag was mistakenly flown before a game involving their neighbours and long-standing rivals, North Korea. 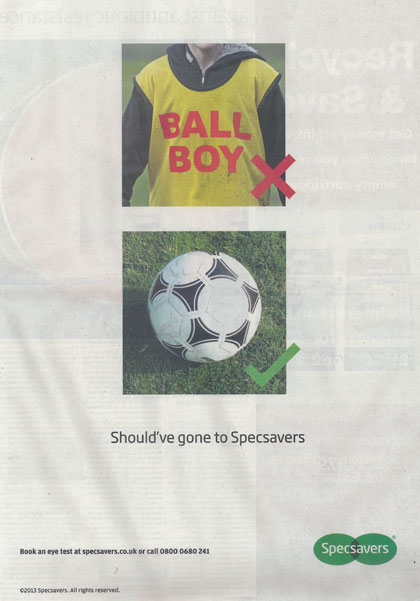 John Cleese back as Basil Fawlty in new Specsavers ad

Which optician is most prominent online? Brand barometer