SodaStream is again hitting out at Clearcast's final decision to ban its "SodaStream effect" television ad, with a print campaign brandishing the word "censored".

The print work states, "Censored. With SodaStream you can save 1,000 bottles a year."

"In the UK, we dispose of 35 million plastic bottles every day and only 26% of these are recycled. An estimated 8% of world oil consumption is used in manufacturing plastic and this doesn't include transportation.

"For some this truth is uncomfortable, but should it be banned from being told? Clearcast and the major UK commercial broadcasters seem to think so."

The ad then directs consumers to SodaStream’s Facebook page, with the line, "Stand up and be heard".

The ad is running under the "Set the bubbles free" slogan in today's Daily Mail, i, Guardian and London Evening Standard newspapers.

SodaStream's original ad, which showed unidentified batches of soft drinks in plastic bottles, was pulled by Clearcast hours before it was due to air, despite the ad already airing in the US and Australia. 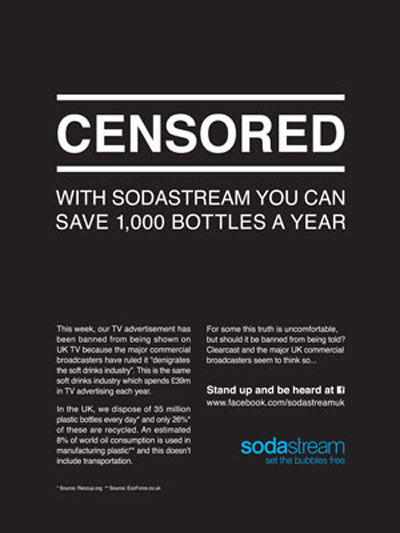 SodaStream takes a pop at rivals in £11m global push