In the latest round of Snap's ongoing battle with its users over the new format update, its shares plunged by 6% after Kylie Jenner tweeted that she's stopped using it.

It could be pure coincidence, but Snap's shares appeared to be doing fine until Jenner (who has 24.5 million followers) tweeted "sooo does anyone else not open Snapchat anymore? Or is it just me... ugh this is so sad" at 9:50pm GMT.

After which the company's shares seemed to immediately go into freefall, pointed out The Verge. 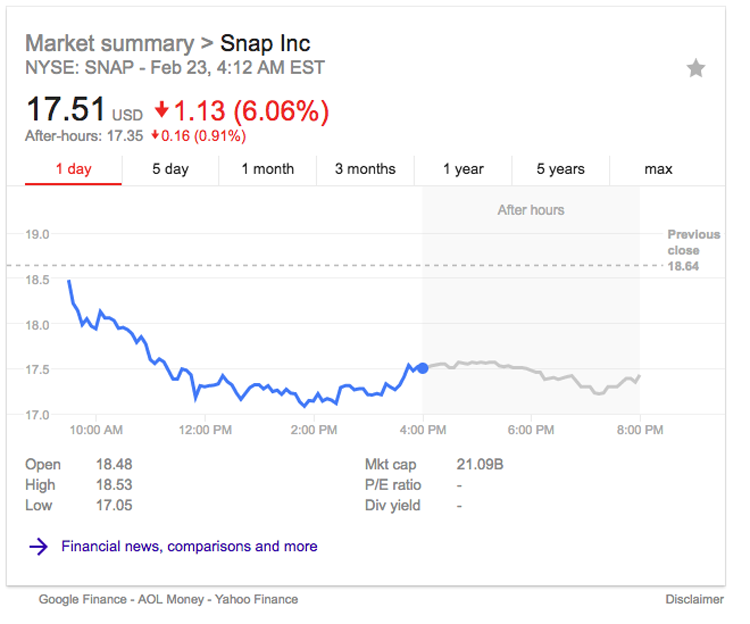 At present, the Snap's shares are more than 6% down from a day ago, resulting in a loss of $1.5bn in market value for Snap, according to Reuters.

Last night, a Snapchat spokesperson issued this statement: "Our goal with the recent redesign is to make Snapchat more personal for everyone. This new foundation is just the beginning and we will always be grateful for any feedback from our community as we roll out new products."

Snap has been having a tough time in the past week. On Tuesday, its shares again fell by 6% after Citigroup downgraded the stock from neutral to sell in part due to the flood of negative reviews the Snapchat app has been receiving since the redesign, reported Business Insider.

Chief executive and co-founder, Evan Spiegel himself rocked the boat a week earlier when he sold off $50m of his stake in Snap.

Despite all this, and despite the 1.2 million-signature Change.org petition for Snap to reverse its Snapchat redesign, the company has insisted that the new layout is here to stay.

However, it promised continual updates to make the redesigned layout easier to use: "Beginning soon on iOS, and with Android in the coming weeks, we are introducing tabs in Friends and Discover, which will make it easier to find the Stories that you want, when you want them. Once you receive the update, you’ll be able to sort things like Stories, Group Chats, and Subscriptions, allowing you to further customise your own experience on the app."

Perhaps the company's confidence comes from beating analysts estimates in its fourth-quarter earnings.

Yuval Ben-Itzhak, chief executive of Socialbakers believes Snapchat may have made a mistake in its redesign: "Snapchat needed to make sure they maintained the quality and relevance of their content, especially as they try to size up to competitors such as Instagram. Unfortunately, over a million people, and counting, disagree with the changes to the app, based on the popular online petition. A drop in quality takes users’ attention elsewhere and Snapchat is currently facing that challenge."

Snapchat will continue to face a huge growth barrier in 2018, and Jenner’s comments have added yet another speed bump, he continued. "The platform can't afford to lose influencers like Jenner especially in a time where influencers are playing such a key role in marketing.  Ultimately, the lack of reach and user backlash that hangs over Snapchat remains a limiting factor for marketers looking to leverage the platform’s full potential. Additionally, all of this coming at a time when the CEO sold $50M in stock may not help investors believe the situation with Snapchat is going to improve."

'Premium social': the rise of motion pictures and what it means for brands

Snapchat to share insight data with its influencers and creators

Snapchat throws its marketing API open to all

Facebook has a 'teen problem' as younger audiences look to Snapchat