Snapchat decided to run the first ads on its mobile app over the weekend, far earlier than expected.

The first advertisement is a trailer for the upcoming horror movie Ouija, and it started showing up in people's Recent Updates section in the Snapchat app. 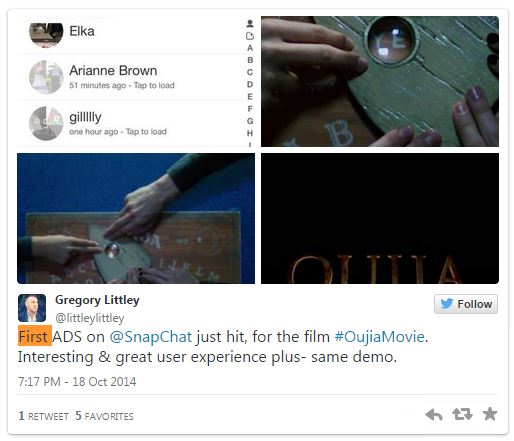 Viewing the ad is optional for users, and it disappears once they've viewed it, much like any other Snapchat message.

So far, the response has been mostly positive, with people appreciating how forthright Snapchat was in communicating its need for revenue in a blog post on Friday:

Understandably, a lot of folks want to know why we're introducing advertisements to our service. The answer is probably unsurprising – we need to make money. Advertising allows us to support our service while delivering neat content to Snapchatters.

In addition, the ads themselves were unobtrusive, especially compared with Twitter, Facebook and Instagram, which received plenty of vitriol once they started monetizing their space. In contrast, people praised Snapchat for not invading their personal feeds and making the ads optional.

What's less clear is how much engagement these ads are getting, and how much value they are giving back to the advertisers. Snapchat has yet to release any projected figures for clicks or views, but now that it's had a successful first run we can expect to see those figures show up in ad pitches pretty soon.

Read the full story on The Hub.