Ahead of the European Championships, the AR statues of four of England's greatest black footballers – Eartha Pond, John Barnes, Rachel Yankey and Viv Anderson – have been unveiled outside Wembley alongside the statue of former England Captain Bobby Moore OBE.

The statues will appear as a lens on the Snapchat Carousel and by scanning a Snapcode, meaning the user can place them anywhere. When using the "BlackBritishPlayer" lens, Snapchatters can learn about the footballers through the digital statues detailing the careers and achievements of Pond, Barnes, Yankey and Anderson. 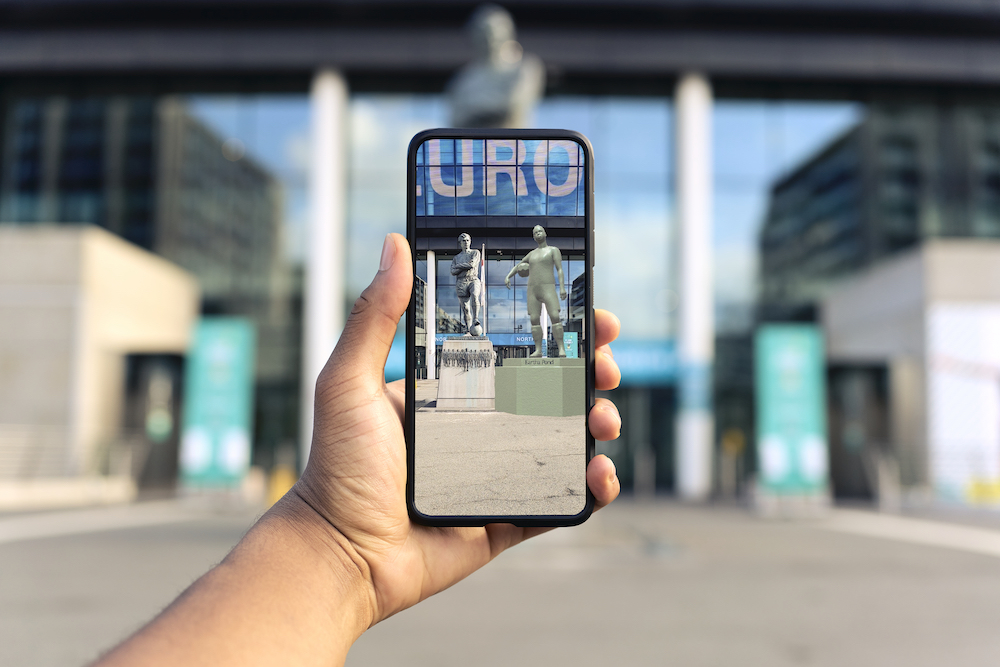 The lens also links to Kick It Out's website, detailing the ongoing battle against racism in football. It was built by Kugali Media, an augmented reality experience creator founded to spread African storytelling, and one of Snapchat's official lens creators.

In the past 10 years five statues have been erected that depict black players: Thierry Henry at The Emirates in 2011, Arthur Wharton at St George's Park in 2014 and The Celebration Statue also known as the "Three Degrees statue" of Cyrille Regis, Laurie Cunningham and Brendon Batson in West Bromwich in 2019.

Tobi Ruth Adebekun, SnapNoir Europe lead, said: "At Snap, we believe that augmented reality is a powerful format for storytelling and began thinking last year about how we can use our technology and platform to tell stories that are rarely ever told.

"We're grateful to have partners in Kick It Out who have been at the forefront of making change in football in the UK, and creative partners in Kugali who are dedicated to telling African stories. Together, we hope that these lenses educate Snapchatters on black British history and inspire them to seek out different stories and perspectives."

This partnership is the first part of a series of activities by Snap designed to celebrate, pay homage to and help educate around lesser-known and under-celebrated black heroes in the UK.

Let's reclaim disruption as a positive force: eight lessons from CEOs and founders

How Snapchat is revolutionising the way we communicate and buy