A behind-the-scenes look at how the brand is trying to recreate its success on Instagram.

For those not in the know, the official nickname for a Slim Jim is a “Long Boi” and fans are part of the “Long Boi Gang.” It was coined by Andy Hines, who helped to create Slim Jim’s voice on social media. Hines died last year at the age of 35.

Amy Morgan, brand communications manager for Slim Jim parent brand Conagra, explained that gaining a presence on Twitch makes sense for the brand as 48% of Slim Jim fans have purchased video-game-related items in the past year.

“Anytime we have done anything that is gaming related, the Long Boi Gang responds very positively to that,” she said.

On Friday, Slim Jim launched a brand page on Twitch, marking the first time any Conagra brand has appeared on the platform. But it isn’t expecting consumers to visit its own page. The brand’s goal is to be a part of the streamer community and interact within other users’ streams.

Evan Weissbrot, president of Slim Jim partner agency 180 New York, said the brand doesn’t see Twitch as a platform for gaming, but a place for streamers to showcase their personality.

“The people that get the most views and engagement are the ones that have fostered a sense of community in their stream, and you can feel that energy in a profound way,” he said. “We want to celebrate the community and streamers.”

To gain a presence on Twitch, Slim Jim is partnering with high-profile streamers, such as Ludwig Ahgren. 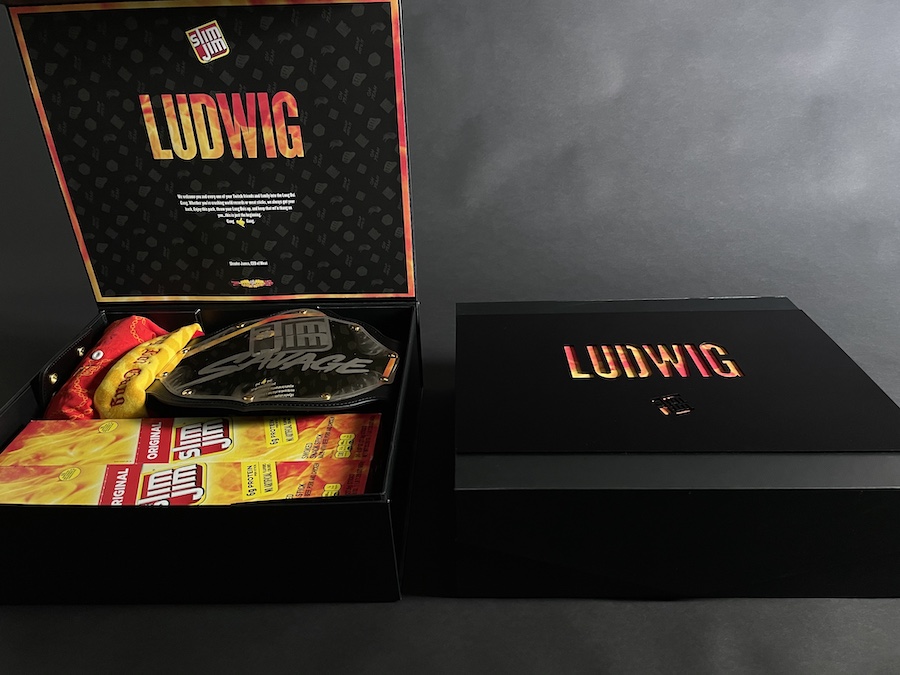 “He has a house he streams out of, kind of like a hype house for gaming,” explained Weissbrot. “He and his housemates have competitions. We said, ‘This is the kind of energy we want to capture.’”

Slim Jim made a customized championship wrestling belt for Ahgren. Every month, he will stream with his housemates to see who will win the belt.

Slim Jim also created a kit for each partner streamer, including bespoke merchandise such as hoodies, t-shirts and neon signs; and digital aspects such as Slim Jim emotes and extensions like polling mechanics.

“We are super-charging their streams,” said Weissbrot. “At a digital and physical merchandise level and a product level, we will take whatever that streamer does best, the reason why people love them and we are going to dial it up with this Slim Jim Long Boi Gang energy.”

Once Slim Jim has its “baseline presence” established, it will open its “stream team Long Boi game platform” up to all streamers, said Weissbrot.

“We want to create a ‘Slimfiliate’ program, where, after we show how we will show up on Twitch, we will open that up with digital kits and plug and play merchandise,” said Weissbrot. “Eventually, everyone who is aspiring to be a better streamer can download our extension and emotes and get that little bit of shine that the big guys get.”

He added that Slim Jim wants users to feel like there is a sense of community when they game with the Long Boi Gang.

On Twitch, Slim Jim wants to recreate the success it’s had on Instagram. When Hines joined the team, Slim Jim’s Instagram account had 5,000 followers. That number grew organically to 1.4 million.

“The secret sauce behind our success on Instagram was befriending memers and the meme community in varying degrees of size, from small grassroots folks to bigger names and engendering a sense of: we are one of you, we are here with you, we are in support of you, we celebrate what you guys are doing, we are not just going to be a brand that makes memes, we are going to be a meme account ourselves, full stop,” said Weissbrot.

This story was updated on February 22 to correct the launch date for Slim Jim's brand page on Twitch.