While UK consumers have been downloading more retail apps in the past year than they have before, only 40% find themselves satisfied with the current offering.

The report, by mobile app developer Apadmi, surveyed 2,000 consumers who use retail apps for their thoughts on current offerings and what they wanted to see more of in future.

Reasons for dissatisfaction, found the report, was the lack of improvements and updates to apps they had previously downloaded (34%) and lack of innovation (30%) beyond browsing and shopping. More than a quarter would think less of a retail brand if they fail to maintain and improve an app they have developed.

This matters for retailers in a market where online retail sales are expected to have reached £60bn in 2016, according to the Centre for Retail Research. Online shopping is now neck-and-neck with in-store as the most preferred form of shopping among UK consumers.

Consumers indicated in the report that they want to be able to shop as quickly and conveniently on their mobile phones as they do via desktop. Four in ten have downloaded more than ten retail apps on their phones but only 17% prefer to shop via a retail app, indicating a gap that retailers should be exploiting.

This is particularly true if retailers want to target younger shoppers. The study found that a quarter of millennials want to be able to shop using a retail app. They are also more likely to purchase online in some form rather than instore.

Reasons for this are mostly around speed and convenience. More than half believe shopping via an app is faster, mostly due to ease of finding items (43%) and being able to avoid queuing (39%).

"These results sound a clear warning message to retailers that, while retail apps are becoming more popular with consumers, many are failing to meet expectations and deliver the kind of service customers clearly expect," said Nick Black, chief executive of Apadmi.

What do consumers want from retail apps?

Primarily, they want their loyalty rewarded. More than half want better incentives and loyalty schemes enabled via the apps they’ve downloaded, coupled with rewards for using the app. Futhermore, a fifth want the offers to be tailored to them.

Meanwhile, a third want better customer service, while the other requirements are around removing barriers to payment. Ideas suggested were for apps to enable contactless payment (19%), biometric payment (18%) and even voice recognition (13%). 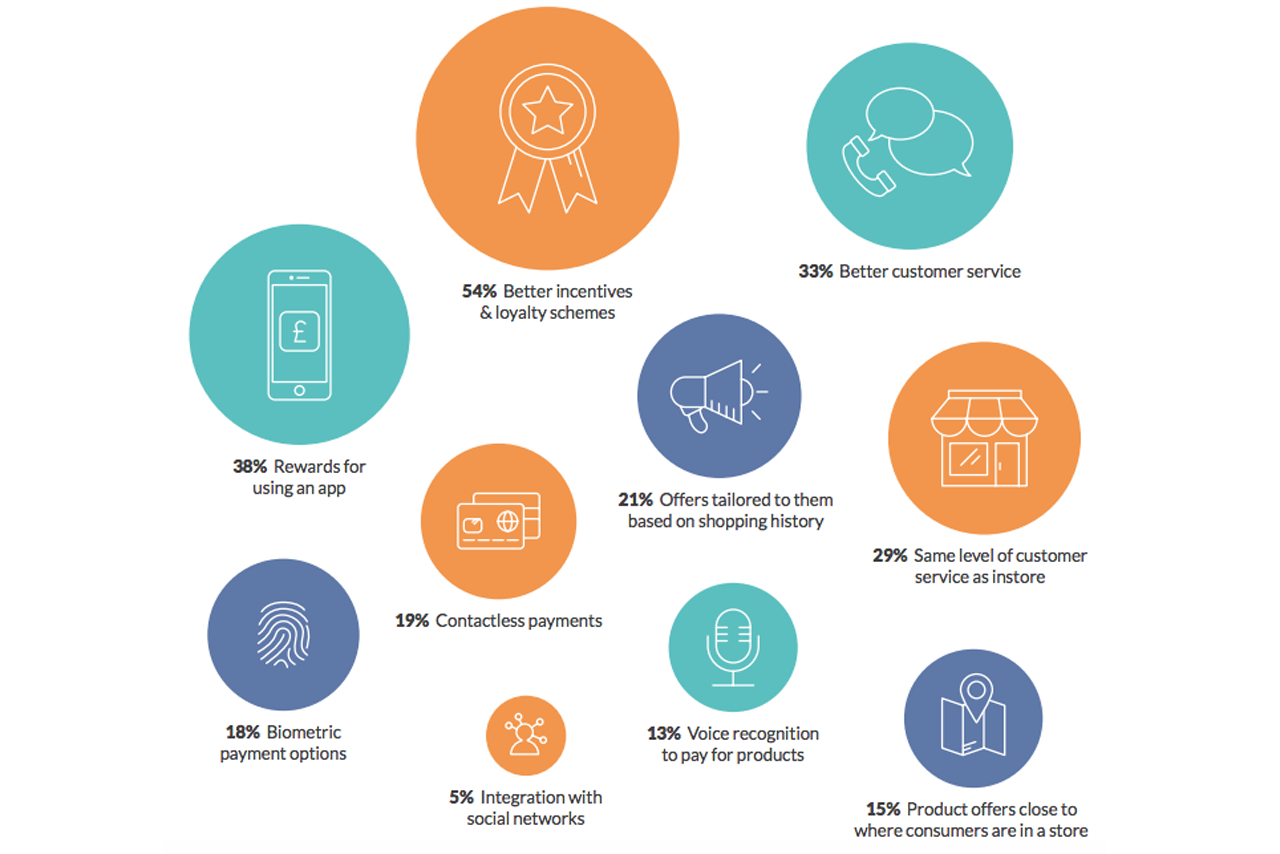 But beyond these practical considerations, 26% of consumers surveyed would like to see retailers implement AI tools in shopping apps. They envision that the AI would remember past purchases and recommend products and deals based on shopping history. Less than a fifth (18%) also think that AI in retail apps, like chatbots or digital assistants, would be a good solution ad that retailers should investigate introducing these tools into apps.

Nearly a third of consumers (29%) believe retailers should invest more into adding augmented and virtual reality capabilities to their apps. The most popular suggestions was that they would like to use these features to see how big or small items are before buying them (33%), while another 29% would use AR to see how they would use a product before they bought it. A quarter would use AR to preview product customisations.

FutureVision: All roads lead to intelligence

Whatever next? What the fast pace of tech development means for marketers

Mobile must finally come first in 2017

User experience will become more essential than ever in 2017