Mute, humourless and in the kitchen: the way women are depicted in advertising still relies heavily on gender stereotypes.

The continued reliance on these stereotypes was highlighted by the Museum of Brands’ research last year into the six stereotypes of women in advertising.

A red thread runs between this lazy stereotyping and the lack of women in creative departments and the drain of female talent from the advertising industry at large. Even a cursory glance at the median pay gap at J Walter Thompson London (44.7% in favour of men) shows that advertising is miles from creating a level playing field.

Ali Hanan, the founder and chief executive of Creative Equals, says: "We can't smash gender stereotypes in our creative work until we change the ratio of female creatives on the shop floor, with equal representation at director level. How can our stories be expressed in an authentic way? At the rate we're travelling, we won't reach equality in creative departments till 2052. Without our voices, who is shaping the narrative?"

The power of advertising to challenge gender stereotypes is a phenomenal, largely untapped force for good. To celebrate International Women’s Day Campaign has selected six ads that have successfully smashed stereotypes.

The last of which was created by copywriter Alex Bertulis-Fernandes, who went viral after her art teacher told her to "dial down the feminism." She offers the industry a glimpse of the brilliance still to come.

She says: "I’m hoping that the next generation of creatives will continue to push for better representation of women in campaigns. I hope a wider range of women will be represented, such as women of colour, disabled women and trans women. We need more of these women in the industry.

"I’m hoping that we’ll see more women in campaigns depicted in active, rather than passive roles. I want adverts like 'This girl can' and '#LikeAGirl' to become the rule, rather than the exception."

1. The sweaty sports-lover
Find her on a sports field, on a bike getting muddy, in a gym getting sweaty, in a pool, on roller-skates, in a team. Not having an existential crisis about the possibility of her hair getting wet.

2. Ageing brilliantly
Understands that ageing is one of life's greatest priviledges; too busy being comfortable in her own skin to waste her time "fighting the signs of ageing". Adventurous, joyful, intelligent. Definitely not a bit part.

3. The woman having a bloody period
Not found wearing skin-tight white jeans, inexplicably roller-skating or pouring an unknown blue liquid into a sanitary pad just for kicks. This woman is having a period and it is bloody and at times bloody painful, emotionally complex.

4. Sharing the load
Happy to share the domestic load with a partner who is happy to do the same. Finds no joy in being a domestic obsessive.

5. The stereotype smasher
Empathetic, determined that neither boys or girls should be confined by outdated gender stereotypes. Advocates for genuine change at a grassroots level.

6. The fearless feminist
Proving the best is yet to come, a fresh generation of female talent using their creativity and digital acumen to challenge the status quo in new, beautiful and inspiring ways. Does not crave or need your approval. 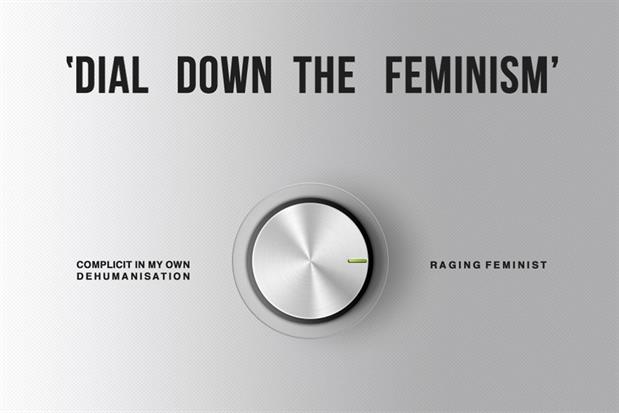 Back to (work) realities

The fight against gender stereotyping must start young

Why is gender stereotyping still such an issue for advertisers?

UK leads the way in Glass Lions shortlist at Cannes

Female leaders share their biggest challenges and how they overcame them