The team at Event is dying to spend the day scouring the web for all the Oscars gossip. So to keep us under control, we've sourced six activations inspired by the glamour of red-carpet Hollywood instead.

Wine brand Casillero del Diablo partnered with agency Cube Communications in August last year to embark on a sampling tour inspired by epic movies. Central to the activation was a double-decker bus, which featured a large movie screen on its side.

Guests could dine on food from caterer Hogs and Hens as they sampled wines from the brand’s new Devil’s Collection.

January saw the release of spy movie Kingsman, as well as the launch of the Mr Porter x Kingsman online fashion collection. To celebrate the latter, the e-tailer collaborated with Google and Inition to create a digital technology experience at Vue Cinema in Westfield London.

When a participant entered the experience, a rig was used to capture their image and virtually dress them in the new collection, before inserting them directly into one of the film’s three key scenes.

Beer brand Staropramen worked with The Marketing Store to host 300 competition winners at a multi-sensory cinema experience last October. Bram Stoker’s Dracula was screened as a live string quartet played, immersive lighting changed the atmosphere of the venue and scent-infusion technology was used to create a full sensory experience.

Guests were also treated to a hog roast and after-party, which featured a guest appearance from Dracula and his brides. 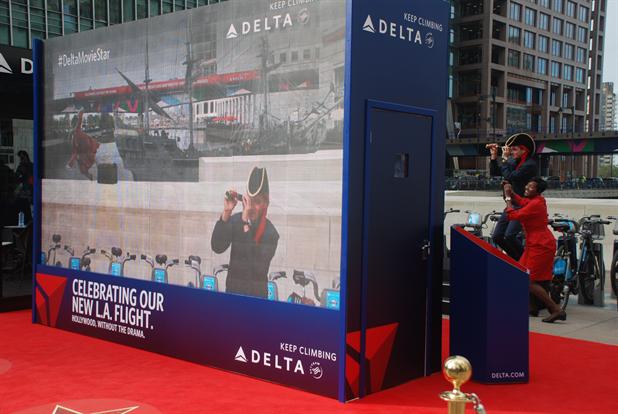 Delta Air Lines transformed Jubilee Plaza in London’s Canary Wharf with a red carpet activation in October. A giant screen was erected to showcase new films onboard the airline’s flights, and a red carpet laid out for selfie moments.

Those who Instagrammed or tweeted a photo or video of themselves at the experience were entered into a competition to win a screen test with Hollywood casting director John Papsidera.

British Airways was another airline that harnessed the power of the movies when it partnered with the Rooftop Film Club last May. More than 170 films were screened throughout the summer at pop-up cinemas in London’s Peckham Rye and Shoreditch, including Top Gun, The Graduate and Casablanca.

British Airways’ cabin crew were on-hand during the events to welcome guests and chaperone them to their seats. The brand also partnered with Bafta for a Silent Picturehouse at Vinopolis in 2013, which saw five travel-inspired films play simultaneously at the London venue.

Agency Cake created a movie-inspired train to celebrate the launch of Sky Movies channels on the broadcaster’s Sky Go service at the end of 2011. The locomotive ran from London Euston to Birmingham New Street, with carriages themed to represent a snowy wood in Narnia, Mary Poppins’ Victorian London and a 1940s train from It’s a Wonderful Life and The King’s Speech.

An iPad or laptop was given to each traveller to watch a selection of films through Sky Go.