This case study is about a simple insight that has transformed not only how a brand is seen by its audience, but how it sees itself.

This case study isn't about a campaign. It's about a simple insight that has transformed not only how a brand is seen by its audience, but how it sees itself.

It restates the importance of interrogating the who and the how, at a time when the marketing industry has been increasingly distracted by the why.

‘A new service for immigrants’

Asian Network’s roots can be traced back to a "new service for immigrants" the BBC launched on TV and radio in 1965 called Making Yourself at Home. The programme was designed to help Asians integrate into the UK and covered issues such as language and cooking, alongside music and dance from Indian and Pakistani films.

By 1977, local radio stations in the Midlands started broadcasting in Asian languages. A decade later, Asian Network was born. As it evolved, its remit shifted to Asian cultural preservation, with editorial focused on Asian music, cultural and religious issues.

A station at risk

In 2002, BBC Asian Network went national via DAB digital radio. Four years later the BBC announced it was investing an extra £1m in a bid to make British South Asian interests "a mainstream part of the corporation’s output".

But Asian Network’s popularity began to wane, and by 2009 it had lost 20% of listeners in a single year. The director-general proposed its closure, but in 2011 the station was saved after a public protest, although its budget was halved.

After being pulled back from the brink, Asian Network enjoyed a mini resurgence, but by 2015 listener numbers were again in decline – its average quarterly reach was just 580,000.

Critically, the network was failing to reach its key audience: the percentage of 18- to 34-year-old British Asians listening was in gradual, long-term decline, from 18% to 12%.

The main competition came not from other Asian-focused broadcasters, but mainstream stations such as Capital FM (8.1m reach in Q4 2015), KISS (4.4m reach in Q4 2015) (Rajar) and increasingly popular streaming services.

Despite this context, at 101 (since acquired by MullenLowe London) we saw a significant opportunity for Asian Network. There are more than a million 18- to 34-year-old British Asians, but no media platform properly understood and represented their values. If BBC Asian Network could connect with this generation, it could reassert its role and value.

The objectives for the repositioning work and communications were to increase the average reach of Asian Network and to bring a new, young, British Asian audience to the station.

We started by trying to truly understand the audience.

From integration to self-expression

Asian Network’s original purpose of education and integration was no longer relevant to 21st-century British Asians. Second- and third-generation British Asians had been born into British culture and were less engaged by Asian language or religious programming. They were not defined by their culture alone, but still wanted to connect with it: they were looking for a new way to express their identity.

With no budget for research, we immersed ourselves in the station and young Asian culture. We assembled a culturally diverse team and went to the station to chat to everyone from DJs to Asian work-experience students. We also listened to how influential British Asians define themselves – filmmakers, comedians, DJs, rappers, musicians, models – and found a confusion and tension surrounding identity.

It’s a question that can be really annoying or enlightening. Someone says: ‘Where are you from?’ People go: ‘I am from London,’ ‘I am from Wembley,’ ‘I am from Pakistan.’ There’s something unfathomable about that question. What do you mean? Are you asking me to define myself? I can’t do that for you. Because I don’t know. Riz Ahmed, actor and rapper

I talk about me and my experiences, but not just about my ethnicity. Race doesn’t matter. If you are funny, you’re funny – that’s it. Sajeela Kershi, comedian

Bollywood and Bangra were still a strong part of their heritage and identity: music that spans and unites generations, a shared experience regularly played at weddings. But those we spoke to liked and connected with Western music as much as Asian music.

They were more interested in "beat" than there were genre or provenance.

Our audience didn’t want to be defined by their identity, but very much wanted still to be connected to it.

How could Asian Network satisfy this contradiction?

It struck us that British Asians’ identity crisis came from the pressure to decide. Were they British or Asian? The realisation hit us. They should not have to. 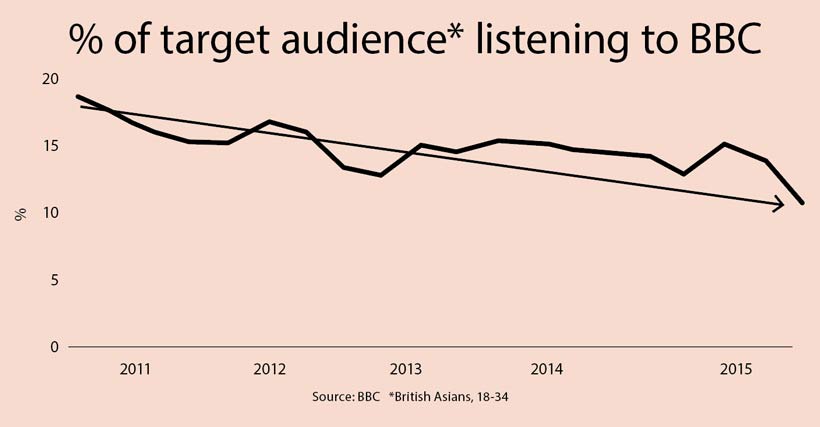 The answer was simple: embrace both sides. Asian-only music was not an accurate reflection of their tastes or their playlist; an Asian-only positioning wouldn’t be reflective of their lives.

DJ Bobby Friction neatly summed up this truth when he said: "I am British, I am Asian. I am a complicated, complex man, and I really want to express this."

The role for Asian Network was to celebrate the glory of "bothness", the joy and creativity of being proudly, equally, Asian and British. Not mixed, not half, but whole. Asian Network had the opportunity to be a unique cultural space that recognised and celebrated exactly what it means to be British Asian.

This idea refreshed the remit of the station and directed the negotiation of a new service agreement with the government for it. Asian Network was allowed to drop its commitment to pure-play Asian-language and religious programming. It influenced editorial: Western and Asian music, side by side. It mirrored a new approach to language: the station reflects how young British Asians have remixed their language by peppering Asian colloquialisms into English conversation. 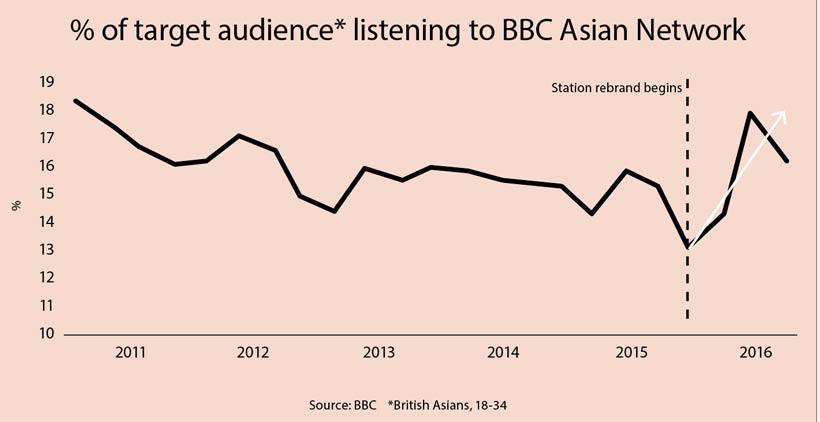 But behaviour was not enough to change perceptions: we needed to physically show people that we had changed.

As part of the rebrand, at the end of 2015, we developed a confident new visual identity for Asian Network and a new station line. We also created a film to launch the new brand idea at the Asian Network internal relaunch. Within two weeks and for just £10,000, we had written and shot the film in collaboration with British Asian rapper Raxstar, expressing what it means to be "100% British, 100% Asian". It was important that the work was written by, and not for, the audience. The film premiered publicly at the opening of Asian Network Live, the station’s first live event in early 2016. It was then shared across social media.

The film was instantly embraced by the station. Mark Strippel, head of programmes, says: "The first time it was shown, it got universal, stunned praise that suggested perhaps we had got it right."

The BBC recognised that the film didn’t just promote Asian Network, but said something important about the wider BBC and its role in celebrating diversity.

Philip Almond, director of marketing and audiences, saw the film and asked for it to be broadcast on BBC One and BBC Two around primetime shows such as The Great British Bake Off, EastEnders and Match of the Day.

"100% British, 100% Asian" has defined the direction and behaviour of the station. Strippel comments: "It has been a central line through the Network against every decision made."

The repositioning and relaunch of BBC Asian Network has successfully kick-started its next chapter. 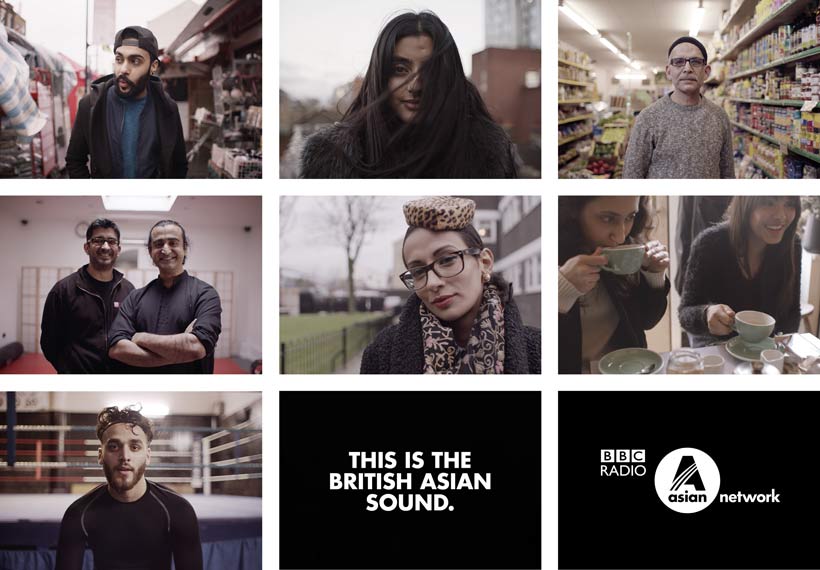 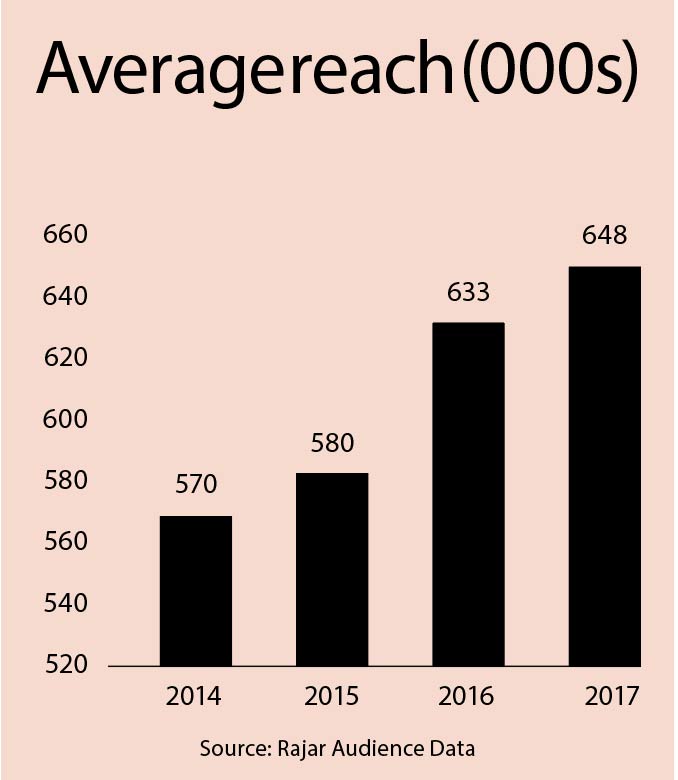 The repositioning and activity exceeded all expectations in terms of reach. The number of listeners grew sharply in 2016 – gaining an average 53,000 extra year on year (equivalent to filling the O2 stadium three times). This 10% audience increase pushed Asian Network’s market share from 0.3% to 0.4%.

It has not been a short-term impact, either. Reach numbers have continued to grow since the repositioning in February 2016.

A younger audience was recruited. For the first time in five years, we recorded an increase in the number of our core target audience listening to the station. They were also listening for longer. The average hours per listener, per quarter, jumped by 13% to more than six hours per listener, suggesting that listeners were more engaged between 2015 and 2016.

Defining identity is risky but important, particularly in the context of the ever-growing influence of the politics of diversity.

This insight has broader significance – it is true of any immigrant today. In a world where immigration is still very much a reality and identity is in flux, not only in matters of race but also of gender, where walls are being built and nations barred, it is important to recognise the power of "bothness" – that people can and should celebrate being more than one thing, and that others should respect this.

A big insight on a small budget, "100% British, 100% Asian" has transformed BBC Asian Network from a station at risk of closure to one that represents a growing community’s identity.

Google's AdWords rebrand signals a move away from keyword-driven SEM

British advertising is primed for a creative renaissance. But are you ready for it?

Does your brand have a purpose?