Speaking at Advertising Week in Tokyo, Masahiko Uotani outlined the importance of branding for Shiseido and said people need to have a better understanding of what marketing is

TOKYO — In one of the most engaging presentations at Advrtising Week here, Shiseido CEO Masahiko Uotani explained how he came to join the 144-year-old company from Coca-Cola and used his story as a platform to suggest that Japanese companies should see branding as long-term strategic exercise rather than as an extension of the sales division.

Shiseido chose Uotani for the top position in large part for his experience at a major non-Japanese brand. But while applying that experience is important, Uotani is clear about wanting Shiseido to be global while retaining its Japanese heritage. Upon joining, he said he received more than 700 messages from politicians, business leaders and friends. "They said, ‘you have to work hard because Shiseido is an icon of Japan,’ " he recalled. "’[Rejuvenating the brand] means rejuvenating Japan as a country.’ I realized the responsibility was much bigger than I initially thought."

Clearly, Shiseido is already a strong brand, and Uotani noted that building international brands was one of founder Arinobu Fukuhara's priorities long before the concept of branding really existed. This year, the brand ranks 32nd in Campaign’s "Asia’s Top 1000 Brands" report, a rise of four places. (Within Japan, it ranks 5th.)

But it could still do better globally, and more broadly, Uotani said it was regrettable that only a handful of Japanese brands feature in Interbrand’s Best Global Brands ranking, which ties brand value to business performance. The problem, he said, lies in the perception of what marketing should be.

"Even among quite big consumer companies, marketing is often just a small part of the sales function," he said. "Now we are talking about strategic marketing. For us to position consumers at the centre of what we do, all functions have to work together to build the values of a brand. That means having P&L responsibility. Building a brand is a business and the CEO has to be involved in that."

He added that while 65% of Fortune 500 companies have a CMO position, only an estimated 10% of Japanese companies do. "That’s where we have to change — to implement marketing more strategically," he said.

Uotani said more focus on marketing and product innovation, and combining the two, has helped put Shiseido back on course for growth. He recently made a pledge to increase marketing investment by $1 billion over three years, which he said is producing results.

As part of a staff development plan, Uotani explained that he decided to split the company into six regions, with six CEOs whom he treats as business partners. The aim is to become less centralized, develop better understanding of local markets and avoid micromanagement. "You may say this is common for global companies," he said. "I agree. But for Japanese companies, it’s a huge challenge."

Diversity seems to be an important commitment for Uotani, including nationality, age and gender. The company aims to have a 50-50 split between male and female managers by 2020. It’s not just for show but in the belief that it will produce better results.

Uotani cited a new premium Shiseido subbrand, Clé de Peau Beauté, as an example of a combination of factors from different countries, and an example of what can be created through an unconventional marketing process. He cited the acclaimed "High School Girl?" (an online video created without the involvement of an agency) as an effort to speak to younger consumers in a more original and engaging way.

Uotani concluded by reinforcing his belief, as a business leader, in the importance of marketing. "When we see tough times ahead, we have to be more aggressive in our marketing activities," he said. "It’s easy to cut promotions to protect the bottom line, but we’re going to suffer from that." 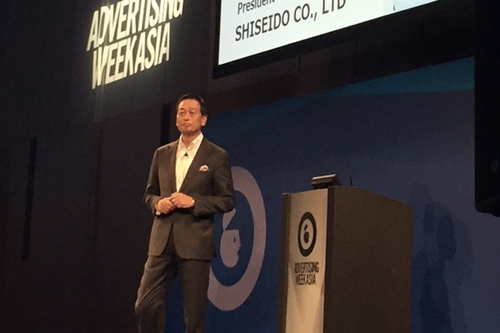