Catastrophe star Sharon Horgan acts, writes and directs - and now she is bringing her comedic touch to brands. She tells Brittaney Kiefer about new projects and her efforts to develop more female directors.

In an office yards away from Southwark Tube station, Sharon Horgan is taking a break from writing the first series of BBC comedy Motherland. Along with that sitcom, the actress, writer and director is juggling the type of projects she once hungered for: HBO’s Divorce, which she created for Sarah Jessica Parker, will debut its second season later this year; and her Channel 4 series Catastrophe is due for a fourth run in 2018. On top of that, Merman, the production company she co-founded with Clelia Mountford in 2014, has recently expanded, adding a branded content division.

Yet Horgan recalls a time before her plate was full when she and her friends tried to get attention by filming sketches and sending them around the industry: "We didn’t have script commissions or anything, we just had our stupid, funny selves and a camera." Her big break came with BBC Three series Pulling, which she co-created with Dennis Kelly after catching a producer’s eye.

"It was an experienced producer who noticed we had something to say and were saying it in a way that was slightly different," Horgan explains. "When that kind of thing [being given a chance] happens to you, you realise that works, and you want to pass it along."

With an expanded Merman, she is on the hunt for new voices – "developing with people from the ground up" – and wants to cross-pollinate what has made her successful in TV with the branded entertainment world.

Horgan and Merman’s search for talent is particularly focused on female directors. "We are really pushing to make a change there," she says.

Merman is not alone in its efforts. In the ad industry, initiatives such as #FreeTheBid are trying to increase opportunities for female directors. But the gender gap is still notable, with only 9% of ads and 14% of films globally directed by women, according to cinema advertising trade body SAWA.

"There are so many female showrunners and female writers, and women who are the whole package and have it all – it’s changing the landscape of TV so much. So the fact that the director hole hasn’t been filled yet in the same way doesn’t make sense," Horgan says. "I’ve worked with enough male directors to know there are great ones out there and there are some that just happen to be doing it."

Horgan partly attributes the gender gap in directing to a lack of confidence – a feeling she relates to from earlier in her career. "Women feel like they need the entire skillset sewn up before they’ll put themselves out there," she says. "Whereas men are like ‘I’ll give that a go’, because it’s that innate sort of confidence that comes with having a dick.

"I’m definitely more confident than I was – but if I had been a male in a position I found myself in a few times, I would have many more directing credits under my belt." 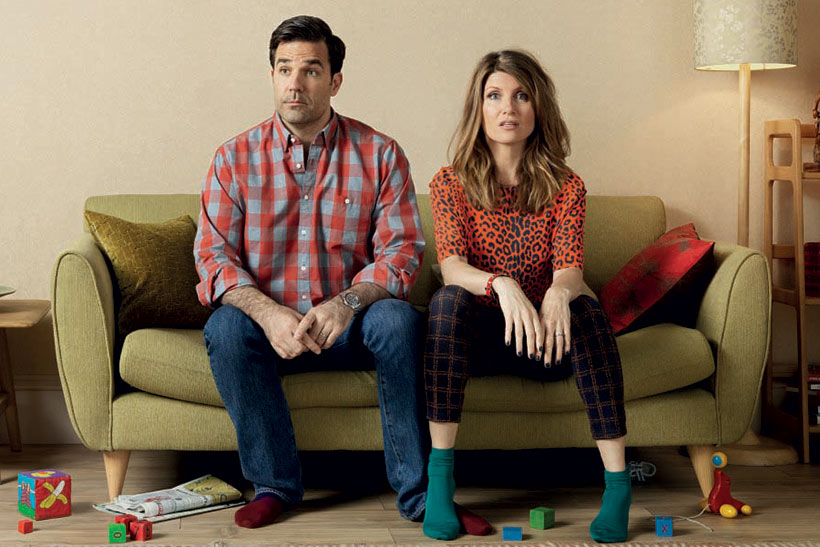 Catastrophe: Horgan co-created and starred in the Channel 4 series

Horgan believes it’s time for the creative industries to change perceptions of female directors. "People see women in more of a capable, mothering kind of role, whereas for the director thing you need to be hard and make decisions," she points out. "It’s not like those aren’t female skills – of course they are – it’s just trying to find a way to break through."

But she is optimistic, noting that the tide has started to turn, with more women in film and TV. One way Merman aims to further this change is by developing talent from its brand division to prepare them for TV roles. And that crossover will work both ways, with film and TV directors at the company taking on branded campaigns.

"Any of the directors we’ve worked with on narrative stuff we hope we can entice towards branded as well because, at the end of the day, people just want to make stuff," Horgan says. "Creative people want to be creative."

Merman aims to approach both non-branded and commercial content in the same way: "We’re concentrating on trying to bring all the storytelling skills that we’ve learned over the years making TV. We want to write it in the same way, cast it in the same way. It’s about making something that we’re proud of, that is funny and watchable."

Merman is currently working on projects for eBay, Carlsberg and Toyota. It also recently created a short film for Sky, produced by Merman and written by Horgan, that tells the story of a family secret that is revealed at a baby shower. It was directed by MJ Delaney, who first gained attention in 2010 with a YouTube video spoofing the Jay-Z and Alicia Keys song Empire State of Mind. She has gone on to direct ads for Aldi, Western Union and Nando’s, among others. Delaney represents the kind of fresh voice that can be expected from Merman – a quality that Horgan calls "unquantifiable".

"It’s that slightly skewed, ‘off’ way of doing things," Horgan explains. "It’s about looking for people who have a very individual way of thinking or making something that has a sort of effortlessness to it. They’re not trying to be that thing, they just are that thing."