Think about it. Our daily lives are punctuated by regular virtual interactions. Statisticians say we’re having less actual sex, but our online lives include a huge chunk of sex-linked "activity." Where does that leave the time-honored marketing principle? Galloping away from sexually charged advertising via traditional media toward creative brand-, service- or issue-based marketing targeting consumers at times when sex is most on their minds.

While porn-site/dating-app adspend is low compared with TV, print and more traditional online advertising, the impact and effectiveness of such campaigns are making brands take notice.

Matthew Waghorn, group director of communications planning at digital agency Huge, can see the pros and the cons.

After investigating a few such sites, Cat Davis, chief growth officer for UK and Europe at Cheil UK, understands the problems.

"I couldn’t see any branded ads on offer," she says. "An ad for Vanish about getting stains out? Not there. While consumers may be loosening up about sexual content they consume online, it’s going to take a while for mainstream brands to consider this as a route to market. The businesses that should be using this ad space right now are the cheeky challenger brands that want to make an entrance and get talked about."

She believes this demonstrates the vital difference between brands cheekily using sex to engage consumers with a similar mindset, "and the brands that are simply using sex gratuitously to sell, similar to the babes-on-bonnets car ads of old."

Not that the move was a "no-brainer" even for Diesel. Risk-taker though it is, the company still has a valuable brand to nurture.

"Diesel has always been adventurous, but this campaign was very appropriate," explains Welch. "It was underwear, it was relevant to the site. There are categories that wouldn’t be appropriate." 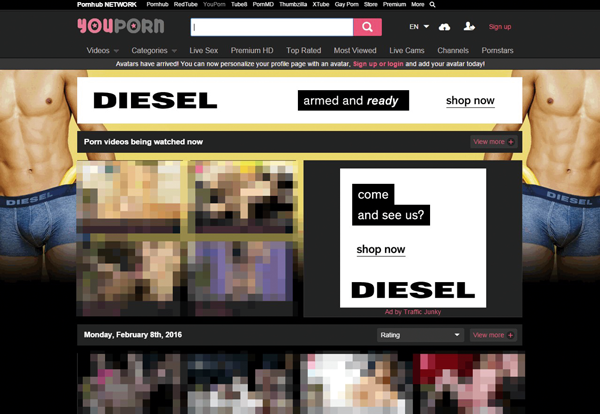 Risk and rewards
Relevance and audience-reach aside, the medium would be too controversial for some. "Brands should be rightly wary of aligning themselves to the sector," warns Kevin Chesters, chief strategy officer at Ogilvy & Mather, London. "It makes sense for a brand like Diesel; it might make less sense for Debenhams."

Interestingly, food-to-go start-ups have embraced porn-site advertising. How-ever, their experiences vary widely and demonstrate that nobody can make assumptions in this territory.

App Eat24 took the plunge and credited its porn-site campaigns (plus the ensuing publicity) for taking it from a cash-strapped, me-too startup to its $134 million acquisition by Yelp.

The brand had managed to reach many more potential customers than if it had advertised on Google, Facebook or Twitter, and at about 10% of the cost. It generated massive traffic from first-time users (a claimed 90%), with customer retention four times that of Facebook.

L.O.V.E.
A more mainstream opportunity can be found on sites designed for users seeking love, rather than indulging lust. That applies particularly to dating apps, which can be exploited to create campaigns that speak directly to the consumer in ways that are relevant and entertaining.

Sexual attitudes are liberalising, and changing behaviour is boosting the chances of dating-app/porn-site campaigns being seen and shared. Professor David Spiegelhalter, author of Sex by Numbers, says attitudes to former sexual taboos have loosened up.

Today, consumers are more tolerant of same-sex relationships, but less tolerant of infidelity or coercive sex. Side-by-side with this is a decline in actual sexual activity as consu­mers spend more time online.

Citing the most recent British National Survey of Sexual Attitudes and Lifestyles (Natsal-3), Speigelhalter says, overall, established couples are having less sex now than when the research was first conducted in 1990. "Connectivity never stops," he adds. "I blame the box set. Netflix has a lot to answer for," he told the MRS’ Impact 2016 conference.

The Future Laboratory, at its Back­lash Brands briefing, also cited research showing that teens are having less sex (and drinking less alcohol), while spending more of their lives online.

Clearly, the old image of lonely singles visiting dating agencies is not what the JW Anderson marketing team was thinking about. That’s no surprise, given that Grindr boasts more than 2 million daily active users globally.

And usage rates are surging across the dating app sector. The rise of digital dating is well documented. The UK has more than 1,400 dating sites and apps, with the
biggest boasting 3 million-plus users; Tinder alone has more than 50 million users worldwide.

In the US, the Pew Research Center reported that 15% of adults now use dating websites and apps; and 5% of Americans in a long-term relationship met each other online.

"Online dating is becoming a mainstream behavior," says Shib Hussain, co-founder of dating site Tab. "Gone are the days when it was a taboo to be using a dating site. The audience has expanded from ‘lonely singles’ to anyone who’s single. We cover the full range of demographics. Brands can take advantage of these audiences by doing things that are interesting, impactful and based on the native functionality of the platform."

It’s that variety of functionality and audience on a range of sites and apps that’s key, not only for brands, but also for groups pushing issues.

Hussain sees more opportunity for campaigning groups than commercial brands. "As with most partnerships, it’s about finding the right fit," he says. "I would argue ‘brands’ that are more
mission-driven, such as charities, will have better success."

Happn, a dating app based in France, has worked with brands and NGOs. It is seeking to boost ad revenues, but is limiting the amount of advertising it carries and wants to ensure all ads are relevant. The company ran Valentine’s Day campaigns for Fiat and fashion reseller Vide-Dressing, both of which focused on romance and offered prizes for interactions. In Fiat’s case, this resulted in about half of the users who saw its ad interacting with it.

However, it is the issue-based campaigns Happn has carried that have garnered most attention. Late last year, children’s charity Plan UK took over Happn in London for a day to highlight the plight of forced child marriage. J Walter Thompson London created a stunt profile of Mark, aged 32, which users kept seeing. The message read: "When we’re free to date whoever we like, it’s hard to imagine only having one option. So whether you like Mark or not, he’s sticking around."

Happn head of trends Marie Cosnard says of the choice to keep advertising limited and to embrace issues: "We don’t want to be the Times Square of dating apps. We believe Happn is a great platform to raise awareness. It’s relevant for NGOs fighting for a cause linked to human relationships. These campaigns make people think about other types of relationship." 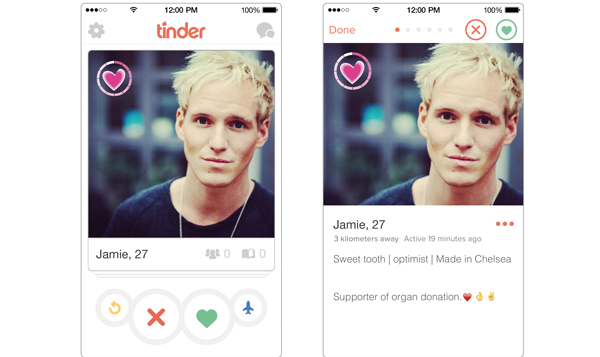 From the heart
The NHS has also used dating apps as a way to raise awareness. Before Christmas, NHS Blood and Transplant ran a Tinder campaign to "normalize" organ donation, spark conversation and drive sign-ups.

Celebrity-backed Tinder profiles were created and pushed to UK users. When they "swiped right" to match with the celebrity, they received a message that stated: "If only it was that easy for those in need of a life-saving organ to find a match."

They could then follow a direct link from the app to register as a donor.

Ceri Rose, assistant director of digital and marketing at NHS Blood and Transplant, says the two-week campaign generated "a 92% uplift in registrations year on year."

The logic behind placing the campaign on Tinder was clear. "We needed to be where people were spending their time, but we have a very limited budget," Rose explains.

"Tinder and NHS Blood and Transplant are very similar organisations. We are both, ultimately, matching organizations."

Because such campaigns are still the exception, the resulting press coverage also meant that public conversation about the subject rocketed, helping to start to achieve the aim of normalizing it.

All these campaigns worked with the profile and functionality of the brand’s chosen sites and apps, rather than against them. And, while they may not command the biggest budgets in the marketing space, as a way to reach a specific consumer and retain their attention, all at a low cost, they are spot-on.

How sexy is that?

Grindr's marketing head: Video strategy doesn't have to be so complicated

Pornhub's sexercise app gets couch potatoes back in the sack