Christopher Columbus was a bad man. There’s been academic consensus on this point for decades, but the realization has now filtered beyond college students in freshman seminar clutching dog-eared copies of a Howard Zinn primer.

For those out of the loop, enjoy this brief recap put together in 2014 by Last Week Tonight with John Oliver. (NSFW language, animated violence.)

The short version: torture, slavery and genocide. So why is his smug mug still being used to sell everything from furniture to kids’ cereal? Let’s take a look at one of the more egregious and absurd examples.

What purpose does Columbus serve in this spot? Is he having fun because he’s a sailor? Then why not go with someone like Captain Hook, who only committed fictional atrocities at sea? Or is it funny because he looks out of place on a cigar boat? Why not Santa Claus, who’s even more recognizable?

So maybe the ad should be taken at face value. Columbus would have hated speedboats; there’s nowhere to put the gold! Speedboats are the preferred method for transporting illicit cargo in the Caribbean, though, a tradition pioneered by Columbus.

This benevolent portrayal of Columbus has been going on for decades. Discovery. Exceptional. Risk. Conviction. Here Columbus is the avatar of progress, usher of Manifest Destiny, bearer of the White Man’s Burden. The rest of the text is very persuasive; who wouldn’t covet such a precision timepiece? But as with most of the ads in this list, the connection to Columbus is tenuous and unnecessary.

To those saying "but this ad is a product of its time"—that’s the point. It shouldn’t still be an issue 60 years on, but it is. 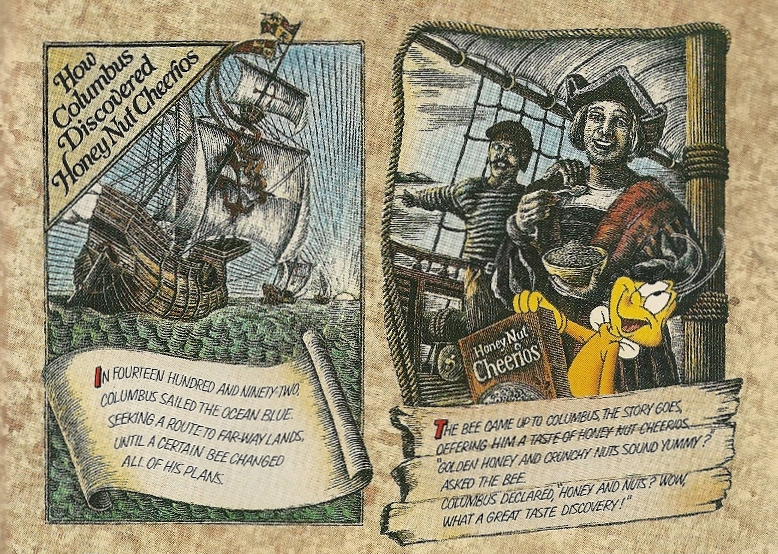 Well, it’s not any less historically accurate than most schoolyard rhymes about 1492. The meter is painful, but wouldn’t Columbus have preferred a cereal with more Vitamin C?

Best idea in the world? There are plenty of other options for brave explorers who didn’t kill anyone: Edmund Hillary and Tenzing Norgay, Thor Heyerdahl, Apollo 11. At least this ad is honest about Columbus’ motivations. Side note: this ad aired during the Friends finale. 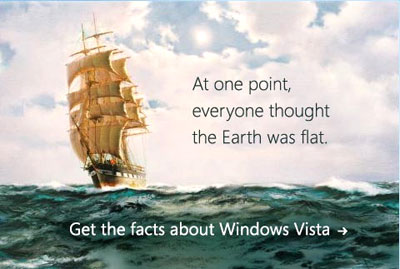 If a product is foundering, which Vista was at the time, why use an image of a boat in rough seas? Besides, Columbus died destitute, and everyone already knew the earth was round(ish). This campaign was mounted in response to Apple’s successful "Mac vs. PC" ads, so maybe the attempt was meant to be half-hearted.

The ad, which was not terribly well-received at the time, was initially thought to be Crispin, Porter + Bogusky’s first work for Microsoft but was soon determined to be an in-house product.

If he had, maybe someone would have noticed the stolen cargo in the hold. This campaign won a Bronze Clio in 2010, so it’s not just unpopular ads at fault.

Reimagined here as a Renaissance Billy Mays, Columbus rehashes the old flat vs. round earth trope. At least he’s properly cast as a huckster. (Flatizzas fell flat, by the way.)

As John Oliver noted in the video above, Columbus is a popular character for local advertising. Sure, there’s a holiday and sales events named after him, so it’s hard to resist the lure of a cheap costume and a terrible accent. But plenty of brands extol their Columbus Day sales without a mention of ships or discovery.

There are plenty of better, more accurate, more lucrative options for brands, so the only excuse for using Columbus is laziness. Don’t be this guy:

Ten brand fails of 2015 that haven't hurt the brand (yet)

Torch protects your kids from 'blue balls' and 'pearl necklaces'

A day in the life: Matt Eastwood, CCO at J. Walter Thompson

An offer to brands: Bring back celebrities from beyond