How much has really changed since the founding of the ASA in 1962 and has self-regulation failed, Kate Blincoe asks.

Boobs on billboards, cancer cures on the web and gyrating men in denim hot pants on television screens... It seems that the Advertising Standards Authority has its work cut out these days. For the first six months of 2017, the ASA has received 13,131 complaints and, thanks to ASA and CAP action, 3,034 ads were changed or withdrawn. The most complained about ad was Moneysupermarket.com’s "Dance off" (pictured above) featuring, some claimed, overly sexualised dancing.

The volume of advertising has increased and diversified, largely because of digitisation, yet how much has really changed since the founding of the ASA in 1962? Does it still help the industry live up to its original strapline of "Legal, Decent, Honest and Truthful"?

Many of the key areas of focus identified in the ASA’s report of 20 years ago are still current issues. These include marketing of products directly to children, scientific accuracy in health and beauty claims and guidelines for celebrity endorsements.

False anti-aging claims and scientifically unproven "guarantees" have always upset consumers. We may not have Vigor’s horse action saddle promising to cure ailments such as indigestion and gout, but frequent complaints are made against natural alternatives to mainstream medicine, including untested herbal remedies or other supposed cures.

Children today have more spending power and arguably more pester power. However, recently, the industry has tried to be ahead of public opinion and largely this has been successful, for example with the prohibition of junk food advertising to kids.

CAP brought non-broadcast rules in line with broadcast regulations, which means that, since July 2017, advertisers have no longer been able to target food or drink high in fat, sugar or salt to under-16s in print, cinema or online.

This is self-regulation working as it should, taking into account evidence on an issue of public health and responding to public opinion – although a prod from high-profile figures such as Jamie Oliver comes in handy with getting change to occur. 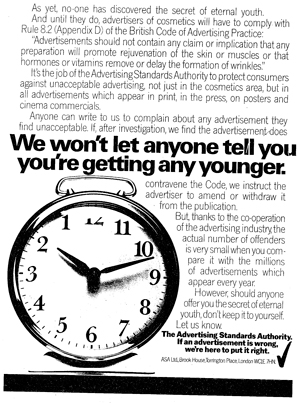 The long view shows this was not always the case. After all, it took the long arm of the law to ban the advertising of cigarettes. This is despite a request for a complete ban of all forms of tobacco advertising by the British Medical Association in 1982. It took as late as 2005 to achieve total coverage of all forms of advertising, for example sponsorship of sporting events such as Formula One.

The process was slow, gradual and didn’t always lead to the desired outcome. The ban on named tobacco advertising actually made Silk Cut increase sales and become the cult cigarette of the 1990s. Their surrealistic campaign based on a series of works by artist Lucio Fontana offered very visual, clever word plays on the brand name. Quite simply, clever advertising resulted in the perceived cool and sophistication of this brand of cigarettes being enhanced, rather than damaged.

Trends, science and good practice are forever evolving. The 7Up poster from the 1950s shows a baby drinking from a 7Up bottle. This image shocks a modern audience as children would not be encouraged to guzzle sugary drinks and it is a complete no-go area for babies. Yet the ASA report of 1997 merely states that this ad would no longer be acceptable because it "might imply that letting babies drink such products straight out of a glass bottle is a wise thing to do."

The nature of offensive or tasteless ads has shown the most shift. Awareness of racial issues has dramatically improved, with few brands slipping up here. The outrage surrounding Pepsi’s Kendall Jenner ad where "Pepsi brings peace to riot" angle, which was perceived to mock the Black Lives Matter movement, stands out as a rare misjudgement in this area, as does the recent "Always bet on black" ad for Paddy Power. 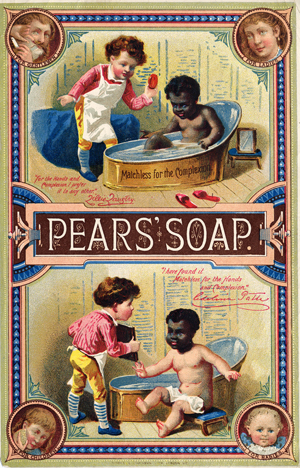 The ad from trusted family brand Pears’ soaps, published in the 1880s (right), is a stark reminder of how widespread racism was. It shows an apparently black child being made "clean" and "white" by a Pears’ bath. It’s genuinely shocking for today’s audience.

While there is now more awareness of gender stereotypes and it’s not just pretty little housewives and men in suits and bowler hats, the ASA today still dedicates much time to this issue. Their recent report, Depictions, Perceptions and Harm researched and provides recommendations on how body image and gender stereotyping should be handled in advertising. 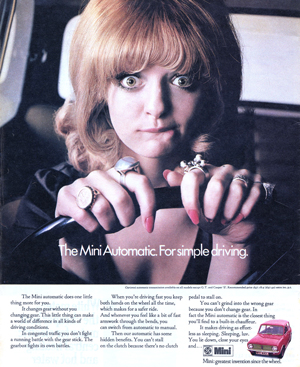 It reported that a tougher line is needed on ads that feature outdated stereotypical gender roles – it’s no longer okay to ridicule people for not conforming to gender stereotypes or to show a father failing to carry out basic parenting duties. No longer would Mini’s 1971 ad (left) mocking a female driver be permitted.

This makes an encouraging change. After all, back in 1962, an ASA end of year summary detailed its team of staff and noted that it includes "the little girl who runs messages and takes round the tea."

As ever, for brands meeting requirements for "taste and decency", there is a delicate tightrope to walk; of course they want to hit the headlines and have people discuss their products, but they don’t want to turn the consumer off and lose credibility.

Has Pepsi been damaged by the Kendall Jenner episode? Probably not, the fast-paced world of advertising means that a blip in branding and maybe even sales can soon be forgotten. Some polls even indicate that people were more favourable to Pepsi after the ad. It could be argued that whilst we were all discussing Pepsi, we weren’t talking about Coca-Cola.

Yet something is amiss. According to the most recent figures from Nielsen, trust in advertising in the UK is falling – including newspaper, radio and TV, as well as online content and email.

Does this signal the failure of self-regulation? Not at all. A sceptical audience can only be a good thing for advertising in the long run. Increasingly questioning consumers will only help the ASA to do its job properly and remind the industry to protect its freedom to continue to advertise responsibly.

Kate Blincoe is a freelance writer and author. With thanks to the History of Advertising Trust for the images. HAT is the professional archiving service for all brands and agencies to safeguard our advertising heritage into the future. If we don’t protect it, we’ll lose it.

With Boris repeating the £350m claim, should the ASA regulate political advertising?