The launch of hundreds of new products has acted as a catalyst to the sector, which has posted growth of 20% over the past five years.

It's one thing to live quietly in squalor, with no one else knowing how untidy or dusty we let our homes become. But if visitors are expected, we all like to spruce up our houses and clean off any sticky finger marks.

As hosting guests prompts people to clean their houses, the broader trend toward entertaining at home, such as dinner parties, has helped boost household-cleaner sales.

Over the past five years, these have grown 20% to reach an estimated £610m last year, according to Mintel. The sector is fuelled by manufacturer innovation to maintain interest and stimulate purchases in what could otherwise be considered a dull market. 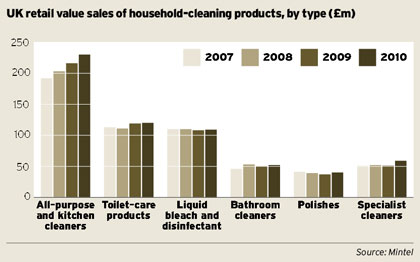 In 2008, 200 products were launched, according to Mintel's Global New Products Database, although this dropped to 119 in 2009. Reckitt Benckiser is the most active new product developer with eight introductions in 2009 (including a major launch of Cillit Bang's 'multi-power' variant) and seven in the first half of last year.

The way in which we clean has changed, though. Gone are the days when Monday was wash day, Tuesday for polishing the silver and so on. People now grab any opportunity to clean up their home, rather than dedicating hours at a time to chores. This is probably a reflection of time-poor lifestyles, as well as a general unwillingness to dedicate big chunks of leisure time to cleaning. According to TGI, almost half (47%) of people clean up as they go along. Nonetheless, while householders are averse to devoting long periods of time to tidying up, more than three-quarters of adults care about their home being clean. 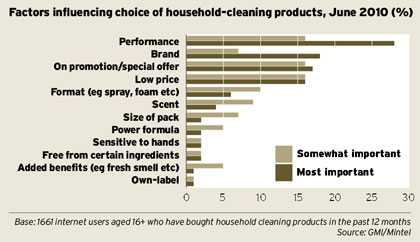 Manufacturers are responding to these trends by launching products such as daily shower sprays.

Despite the economic climate, it would appear that people still regard cleaning products as essential buys. In the same way as many FMCG sectors, however, the household-cleaners market has suffered at the hands of consumers attempting to save money. Deal-hungry shoppers are searching out special offers and multi-buys as well as opting for general-purpose cleaners that can be used in all rooms and on a variety of surfaces, rather than taking home several specialised cleaners. Sales of all-purpose cleaners reached £230m in 2010.

Consumers are, however, buying higher numbers of specialist cleaners for tougher cleaning jobs such as ovens and carpets. Sales of these products were estimated to have risen 16% last year to £59m. Perhaps in more profligate times, people called in outside help to tackle such cleaning jobs, but are now doing the tasks themselves.

Four manufacturers lead the field in this sector: Reckitt Benckiser, Unilever, SC Johnson and Procter & Gamble (P&G). Between them, they account for more than half of sales, and all four have increased market share over the past couple of years. 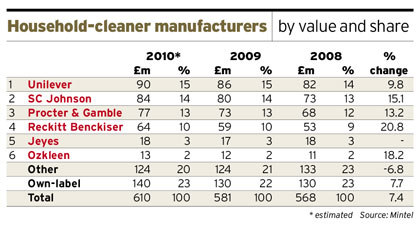 Brands that have run high-profile ad campaigns have been rewarded with sales increases. Nonetheless own-label remains significant in the sector, accounting for almost a quarter of sales by value last year.

Reckitt Benckiser has put innovation at the centre of its growth strategy. Its Dettol surface cleaners benefited from consumers' heightened awareness of hygiene during the 2008-09 swine flu scare. Last year, the company added variants of Harpic Liquid and Cillit Bang Grime & Lime to its portfolio, both of which focused on the power of their performance.

P&G relaunched its limescale-cleaning range, Viakal, in 2009, as well as combining the Flash and Febreze products into a 'fresh-smelling' multi-purpose cleaner.

Only a quarter of respondents to a survey by market research company Global Market Insite said their purchasing decisions were influenced by brand in this sector. The most important factors cited were performance (44%), promotions (33%) and low prices (32%).

Although brands such as Ecover and Method position themselves on their green credentials, it is likely to remain a niche category, as only 4% of shoppers specified that they wanted cleaning products to be free from certain ingredients.

The sector is predicted to grow by 20% to be worth £734m by 2015, although it will be fairly static in real terms. New product development is expected to focus on the convenience and power of the products. 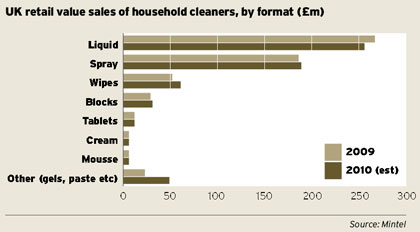