A resurgence in breastfeeding and home cooking may hamper demand, yet brands' increasing emphasis on convenience is building sales.

For years, the UK birth rate was on the rise, culminating in a mini-baby boom in the late 2000s. But 2010 signalled the second successive year during which the rate fell as women delayed starting a family until they were more financially stable and the recession prompted immigrant families to leave the UK. Last year, 780,000 babies were born in the UK, a drop of almost 8% since 2005, according to the Office for National Statistics.

This is not the only challenge that baby-food and -milk manufacturers have had to face. The increasing rates of breastfeeding, long championed by health professionals as the best option for babies (the Department of Health insists that 'Breast is best'), is good news for infant health, but means the uptake of formula milk is delayed by more mothers or avoided altogether.

Similarly, the rise in cooking from scratch means many parents opt to puree their own concoctions when weaning their infants. More than half of consumers prefer to make their meals from scratch, according to TGI. Those combining the two approaches might view manufactured baby food as a back-up option to supplement their home-cooked fare.

On top of these factors, the sector is facing the same issues as the rest of the food industry, such as the rising cost of raw materials, pressure on pricing from the supermarkets and a fall in consumers' disposable income.

However, in general, baby foods and drinks have performed very well, and the market is expected to be worth £567m in 2011, according to Mintel. 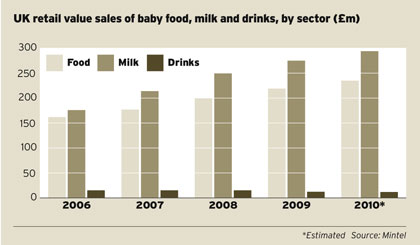 The arrival of more on-the-go snacks and convenient formats is bringing additional value to the sector.

In the milk segment, 'follow-on' and 'growing-up' products have been a focus of innovation to encourage parents to extend the use of these types of milk rather than progress to standard cow's milk. This month, Cow & Gate has launched its site www.growingupmilkinfo.com to promote the nutritional benefits of giving 'growing-up' milk to toddlers.

Nonetheless, manufacturers of baby milk have to tread a fine line in any promotional activity so that they are not seen to be promoting bottle milk ahead of breastfeeding. In March 2010, the Advertising Standards Authority upheld a complaint regarding an SMA magazine ad campaign for 'follow-on' milk that it ruled indirectly promoted infant formula.

Heinz is the dominant manufacturer in the sector with its broad food and drink offering. In 2010, it added the Taste of Home range to its line-up. 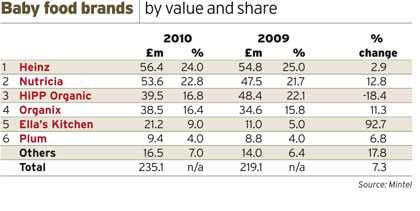 However, Danone's baby division Nutricia, with its Cow & Gate and Aptamil brands, is threatening Heinz's lead with sales increasing almost 13% in 2010, particularly helped by a strong performance from its Cow & Gate Baby Balance range.

Some of the most innovative product developments have come from the smaller brands, particularly on the organic side; while HiPP's sales fell in 2010, the Organix and Ella's Kitchen brands built share. Format choice may have something to do with this, as the latter two have introduced, or focus on, pouch formats, while HiPP has stuck more rigidly to glass jars.

Organic baby food has out-performed other organic food segments as some parents seek to feed their children the best-quality ingredients that their income allows. Indeed, there are now three clear tiers in this market, according to the relative spending power of parents: premium, mainstream and own-label. 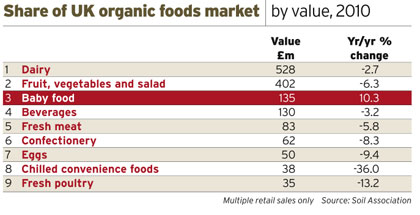 At the top end, Annabel Karmel, a food guru for mums whose baby-recipe books have long been a staple for many, successfully crossed the tracks to put her name to prepared baby food in 2007.

Little Dish, meanwhile, has appealed to parents who prefer to cook their own food and help ease their conscience about buying chilled, ready-made food by emphasising its 'just like you'd cook at home' position in its ads.

The launch of Asda's Little Angels baby-food range in squeezy pouches last February should be viewed a good indicator of the viability of the value baby-food market. 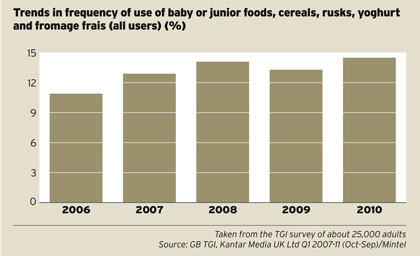 This is a growth sector, with the declining birth rate expected to level off and increase again as the economy recovers. By 2016, sales of baby food and milk are predicted by Mintel to reach £761m - a 9% increase on 2010, when inflation is taken into account.

Rachel Stevens to be face of organic baby brand