Advertising veteran Stephanie Peirolo is putting on a one-woman show tonight in Seattle – with support from local agencies – to share her experiences of sexual harassment, settlements and personal tragedy throughout her career.

The show, "Disclosure," will take place at 7:30 p.m. at Seattle’s Cornish Playhouse, with 100 percent of all ticket sales going to the Jubilee Women’s Center, which helps women in complicated circumstances, such as domestic violence or homelessness.

"I like that Alan is acting as such an ally, and as a gay man who was out pretty early in his career, he said he thought he knew what discrimination was and then after seeing what I went through, he had a different understanding," Peirolo told Campaign US.

So far, "Disclosure," which is also being backed by Wunderman Thompson, Wongdoody and MediaPlus, has sold more than 100 tickets. Originally, the show was meant to run in February, but a major snowstorm pushed the performance to today’s date.

"Disclosure" tells the story of Peirolo’s three legal settlements throughout her career at ad agencies. She first told part of her story for The Moth in a 12-minute gut-wrenching yet comedic talk about her work experiences and her son’s tragic accident, which led to his untimely death. When her health insurance at the time refused coverage, Peirolo’s prior employer – a major undisclosed holding company – did not support her; rather, the agency fired her for taking time off to care for her son.

The first show was directed by Moth collaborator Maggie Cino  who helped push Peirolo to tell her full story in "Disclosure."

Seattle is the first stop for Peirolo’s show, but she’s hoping to bring it to other cities, such as New York, with support from other agencies and organizations in the industry.

The show is also meant to give a sense of hope for the future of adland.

"There are advocates trying really hard to change how we work and people are fighting and they’re starting to make some progress," she said. "I want to shine a light on that and be able to say, ‘I went through these things, but I’m still standing and I still work in advertising.’"

Tickets for "Discloure" are $20, but everyone involved wants to encourage as many people as possible to attend, so tickets can be purchased for as little as $5. Ticket goers can also pay more than $20 if they want to contribute more to the cause.  Purchase tickets to the show here. 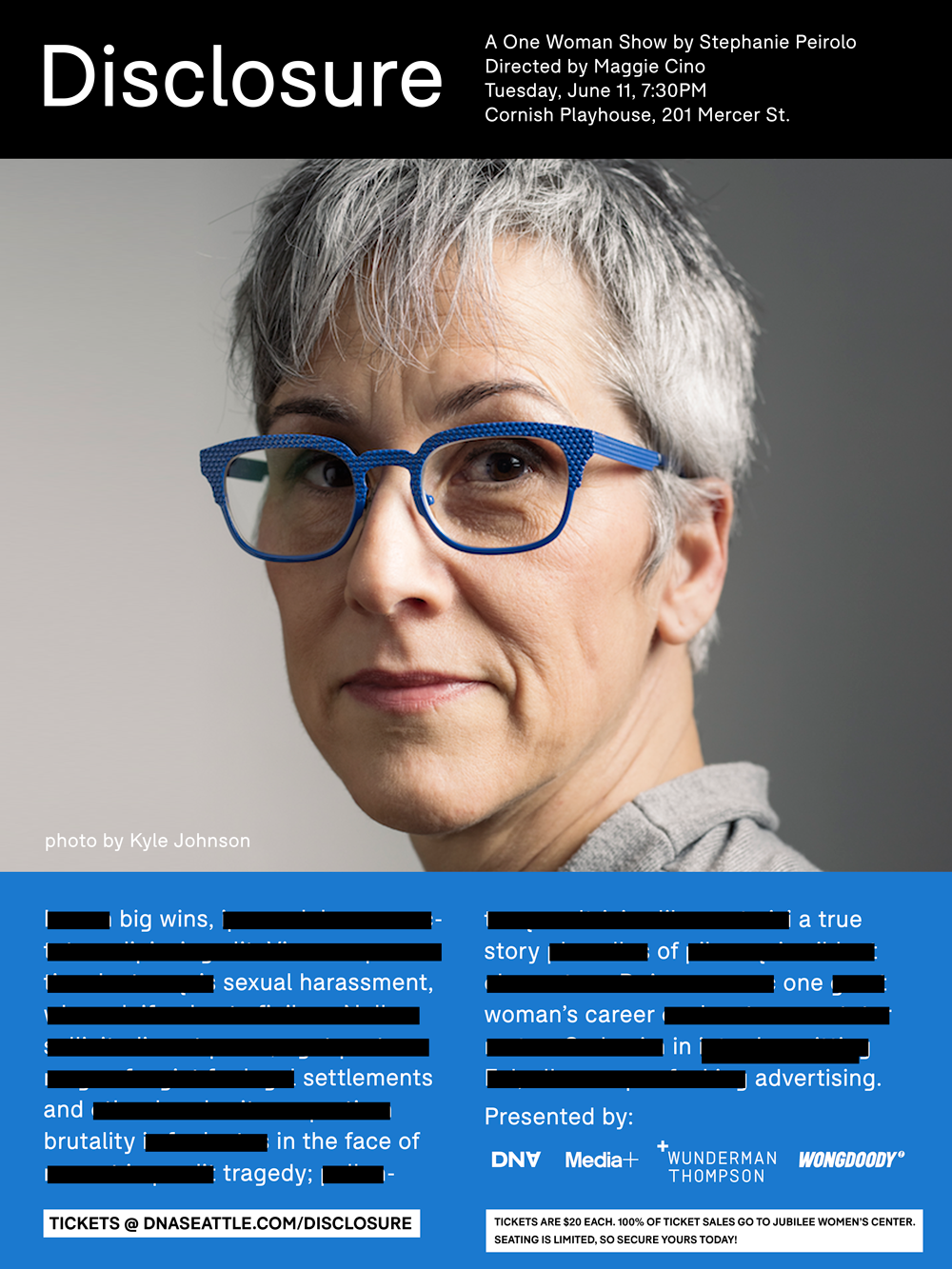 DTFlip the narrative: How we fell back in love with OkCupid

Voice of MeToo gets louder in new PSAs