Samsung has unveiled two new wearable devices, including a pair of headphones that clasp around the user's neck and vibrate whenever there's a new call or text.

The Gear Circle wireless headphones can pair with a user's smartphone to take calls and text notifications, and play music through Bluetooth. Users can also use the Gear Circle's Bluetooth connection to issue voice commands.

When not in use, the Gear Circle can join together around a user's neck using the magnetic clasp. The new headphones will be available in black, blue and white from October, though Samsung hasn't given a price.

Samsung also launched the Gear S smartwatch, its second with a curved screen. The biggest change is the addition of 3G connectivity, meaning users can make calls and access the web without having their phone nearby. 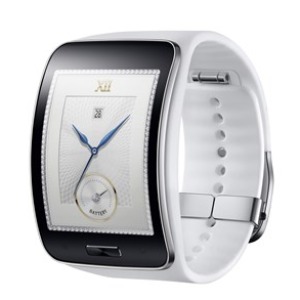 The new watch features a 2in Super AMOLED display, runs Samsung's own Tizen operating software, and features fitness and mapping apps. The watch is dust- and water-proof with a battery lasting around two days.

Samsung touted its credentials as an innovator in wearable tech, with the company launching a raft of devices in the last year, starting with the first Galaxy Gear watch last September.

"Samsung is leading this exciting and rapidly developing wearable category through progressive innovation," said CEO and head of IT and mobile communication, JK Shin.

"The Samsung Gear S redefines the idea of the smart wearable and the culture of mobile communication. It will let consumers live a truly connected life anywhere, anytime."

Most wearable tech is irrelevant to women