When Sainsbury's first began approaching agencies about its ad account late last month, it was a covert operation and the conversations were conducted in strict confidence.

The sensitivity is easy to understand. Not only is Sainsbury’s operating in a market more fiercely competitive than ever, the supermarket’s relationship with Abbott Mead Vickers BBDO is considered one of the most solid in the industry.

Yet, for some time now, Sainsbury’s has been looking for a new strategy to reconnect the brand with key cultural talking points. Sources with knowledge of the account said there was a feeling at the brand that, despite the popularity of the ads, Sainsbury’s had not achieved the brand fame and cultural connection that it had enjoyed during the Jamie Oliver years.

Brand consultant Kate Jones said Sainsbury’s "absolutely needs talent" but, first, it needed to be sure of its own identity.

"Would Jamie be relevant for Sainsbury’s today? That depends on whether it thinks of itself as a supermarket or an omnichannel department store," she added. "Right now, the ads are lovely but not really shouting about what the business stands for. There needs to be a point of view, and a face to hang it on could really make a difference."

Chris Hirst, chief executive for Europe at Havas Creative Group, said a review was unlikely to solve Sainsbury’s problems and that, if it wanted to recruit a "new Jamie", it should stick with AMV.

"They should be asking more fundamental questions around the role of their agencies," he said. "In particular, how to build a solution with data as a driver of all aspects of their marketing mix, including how it affects the role of creative."

AMV last faced a review in 2005, when it beat J Walter Thompson in the pitch. AMV convinced Sainsbury’s with the "Try something new today" strategy, which aimed to snap consumers out of "sleep-shopping". The strategy was credited with a £2.5bn revenue boost and subsequent profit recovery at the retailer.

There had been rumours that Sainbury’s was on the verge of dumping Oliver when it called the review, but changed its mind when the TV chef gained fresh appeal thanks to Jamie’s School Dinners, which aired during the process. Oliver went on to stay on for another six years.

Since the supermarket parted ways with Oliver in 2011, AMV has created a series of impactful Christmas campaigns, starting with "Christmas in a day" in 2013, followed by "Christmas is for sharing" and "Mog’s Christmas calamity".

The ads garnered critical acclaim, media attention and public enthusiasm, with last year’s Mog film racking up 37 million online views and leading to strong sales for the tie-in book and soft toy. Despite this, Sainsbury’s reported flat sales over the festive period.

Now, Sainsbury’s finds itself caught between the growing forces of Aldi and Lidl at the value end of the market and Waitrose at the other end. The scramble to retain customers has led Sainsbury’s, like its "big four" rivals, to slash prices and simplify promotions. It is now waiting for the Competition & Markets Authority to approve its £1.4bn acquisition of Argos, which would allow the brand to transform its delivery and collection offer.

Sainsbury’s would not comment on the direction it wants to move in but indicated that change could be afoot. "Sainsbury’s and AMV have a well-established relationship that stretches back over 35 years and, as you would expect, from time to time it’s important for us both to take a fresh look," the company said.

Sources said AMV made a last-ditch presentation to Sainsbury’s on Friday. A final decision on whether to call a formal ad review is expected in the next week. 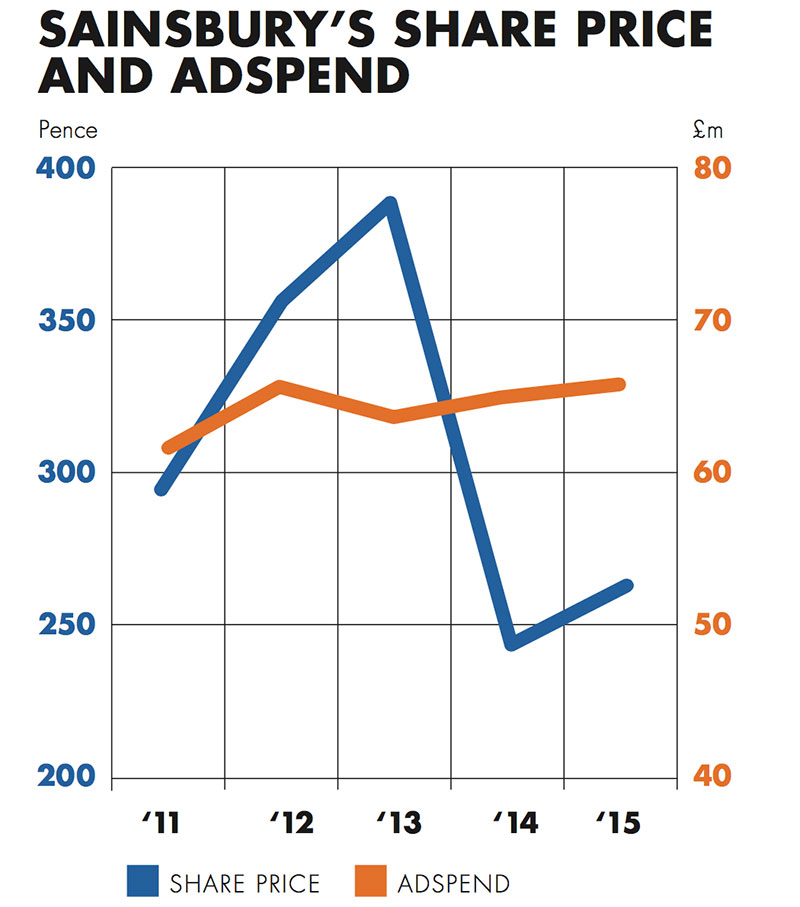 How agencies can keep a long-term client

Honesty
Charlie Carpenter, managing director at Creativebrief, says: "Be honest with clients about what you are good at/not."

Consistency
Relationships need "refreshed consistency", Martin Jones, managing partner at AAR, says: "You should have a core team but constantly refresh it rather than have the same people for X number of years."

Get to know the business
Suki Thompson, founding partner of Oystercatchers, recommends observing the client’s company culture and visiting their stores or restaurants.

Understand personal issues
"Know when they have work and personal stress moments," Thompson advises. A text to say you’re thinking of them wouldn’t go amiss.

Collaboration
"Build a relationship from the start that is genuinely open, inclusive and respectful on both sides," Carpenter suggests.

Celebrate
"Agencies should celebrate longevity as much as you celebrate new business," Jones says. "The anniversary of your relationship is like a wedding anniversary – you should make clients feel special."

Consumers have no idea how much food they're wasting, Sainsbury's report reveals

Sainsbury's in talks with four agencies

The most memorable Sainsbury's ads by AMV BBDO

The supermarket war heats up