Do you know what to do if someone starts shooting? This poster treats gun violence like a choking hazard.

Randy Klein is skeptical. The co-owner of Whiskers Holistic Petcare on 9th St. in Manhattan’s East Village unfurls a large vermilion poster emblazoned with a 9-inch image of a handgun. The header, in a 250 pt. san serif font, reads: SHOOTING.

In case of shooting, act immediately.

The remainder of the poster explains the steps to take in case a mass shooting occurs in the vicinity – running away, leaving valuables behind, finding weapons only if fleeing is impossible. The text is dispassionate, like the Choking Victim posters that adorn every restaurant in the city. 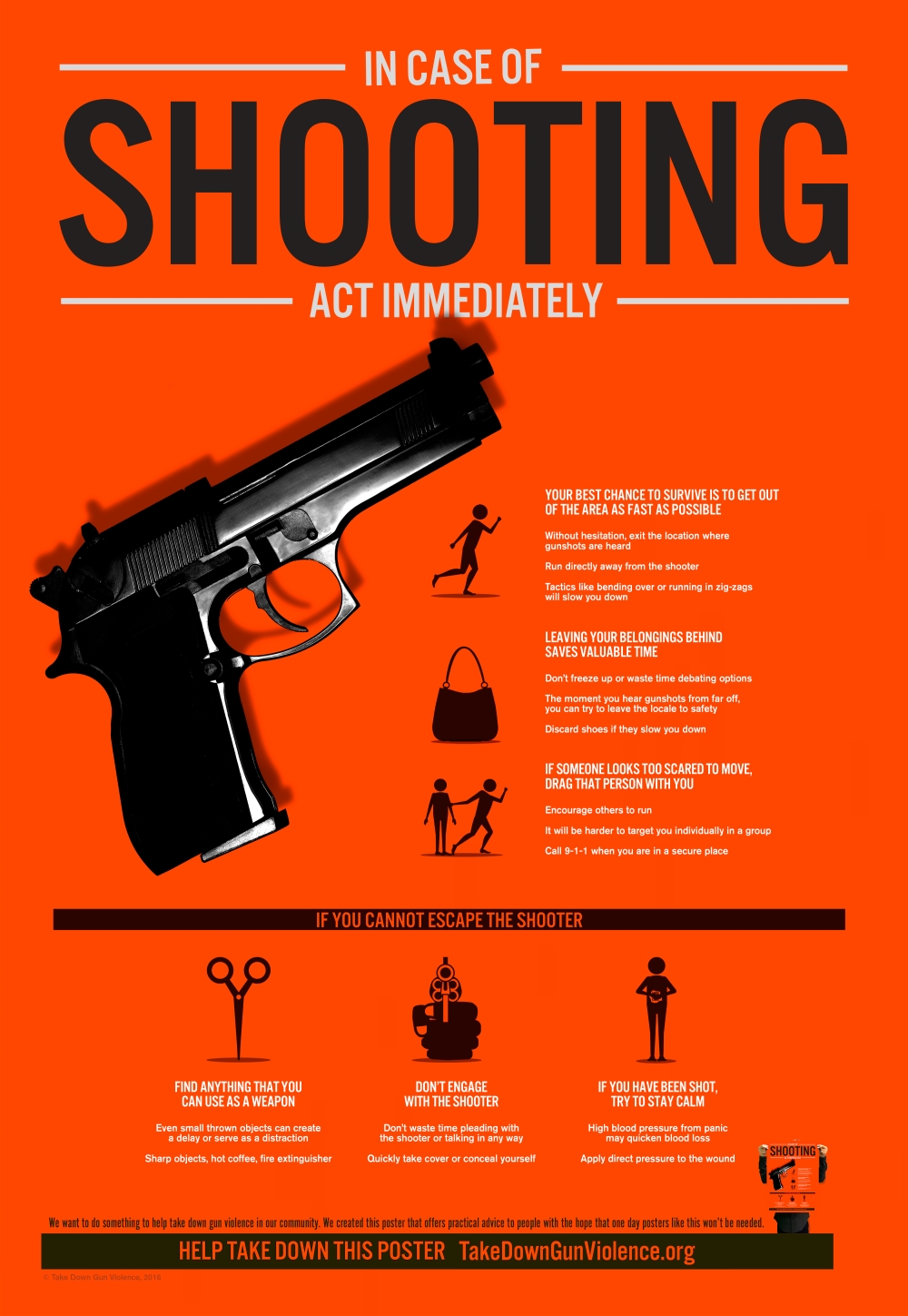 "It’s information from the Department of Homeland Security and the New York City Police Department," says Scott Carlton, VP, ACD at Saatchi & Saatchi Wellness. He and Klein are standing in an aisle of her store, flanked by squeaky toys and fluffy cat beds.

On a normal Wednesday afternoon, Carlton and Gargano would be at their desks in the office they share at the SSW building in Gramercy. But today, a sweltering 90-degree day in mid-September, they are toting a sack of posters around the East Village trying to convince local business owners to put them up in plain sight.

It’s an atypically hands-on media placement. Carlton and Gargano have hit the streets of Manhattan a half dozen times this year, walking unannounced into local coffee shops, record stores, bars, bodegas and retail establishments, looking for managers and owners with sympathetic ears and available wall space.

If the effort-to-eyeball ratio seems skewed, it’s because this campaign is being carried out off the books. Carlton, Gargano and three other people at Saatchi Wellness – including Global CCO Kathy Delaney – are creating, executing and placing this startlingly frank campaign on their own time and with their own resources.

"There’s a certain sadness that I have that this is the new reality," Delaney said, citing the increasing regularity of mass shootings in American homes, schools and businesses. "This work was really born of that. They were created to be shocking."

The poster campaign has been in the works for nearly four years, germinating in the wake of the Sandy Hook shootings in Dec. 2012, when a gunman killed 20 children and six adults at an elementary school in Newtown, CT. Gargano was haunted by the shooting, particularly the image of Charlotte Bacon, a 6-year-old at Sandy Hook who died in her new pink dress, killed by "bullets the size of crayons," she recounted. "I made the layout that night."

When her contacts on social media weren’t as receptive to the idea as she had hoped, Gargano took the idea to the office. "Kathy got it. She took it seriously," she said.

Delaney appreciated the comparison Gargano’s design made. "It parallels that familiarity that you have with something like a choking poster," Delaney said. "Yes, that’s something that could happen, and so can gun violence, and it needs to be addressed as something with the same level of ubiquity."

Saatchi & Saatchi Wellness has waded into the gun violence debate before. Work for the Coalition to Stop Gun Violence drew criticism from the National Rifle Association—an outcome Delaney considers a badge of honor for the agency. She notes that the American Medical Association has declared gun violence a public health crisis, so the topic falls directly under the agency’s purview.

But there’s no client for the poster campaign – just a handful of creatives hoping to exercise their conscience. The poster directs viewers to a microsite that expands on its advice. "As of yet we don’t have a partner, and we think it’s too urgent to wait for that partner," Delaney said. The team also has full control over the messaging – no approvals from clients required, so the campaign is free to evolve as they see fit.

A "school shooting" version of the poster is in the works, Carlton said, inspired in part by the woefully inadequate advice Gargano’s son came home with after an active shooter drill at his school. (His plan was to use filing cabinets to climb into the ceiling.) Future versions of the poster could include more controversial advice, like how to fight back against a shooter. Hot coffee. Sharp scissors. "One of the security people we talked to said a fire extinguisher can crush a skull," Gargano said.

In the meantime, the latest outing was a success. The manager wasn’t in at Vnyl Coffee on 3rd Avenue, but Carlton took down his email address for later. Unexpectedly, the AMC movie theater on 11th St agreed to display a poster—not far from an ad for action flick "The Accountant" in which Ben Affleck prominently sports an assault rifle. 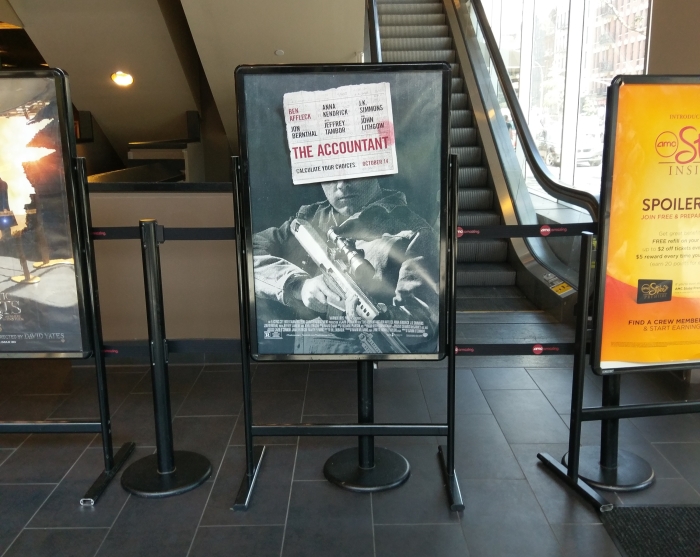 A tattoo parlor on the corner of St. Marks and 7th gladly added the poster to its front door, though the entrance was so covered by other bills that store policy may well be to accept all comers. Café Mocha, across the street from the site of a fatal gas leak explosion in 2015, let Gargano hang the poster right next to its own choking victim sign, in the narrow hallway by the bathroom. 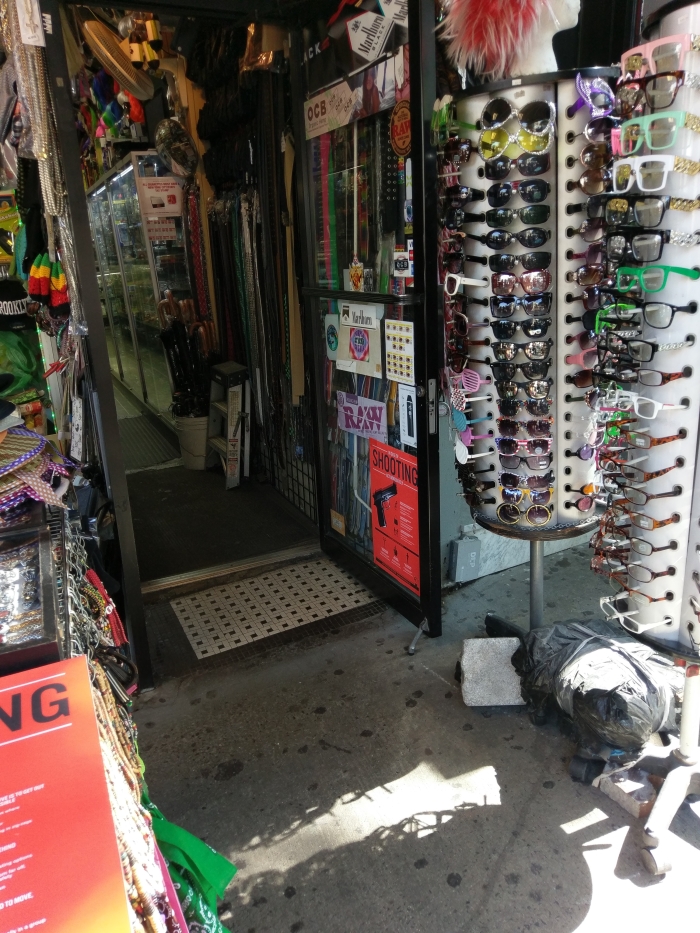 A video store on 1st Avenue put up two posters, in the front of the store, away from the adult videos, sex toys and "gun oil" (not the kind for firearms). And the manager on duty at Crif Dogs – the hot dog joint that also serves as the "secret" entrance to speakeasy Please Don’t Tell –  thanked them for doing "really important" work and offered them free food, which they politely declined. They hung the poster across from Ms. Pac Man. 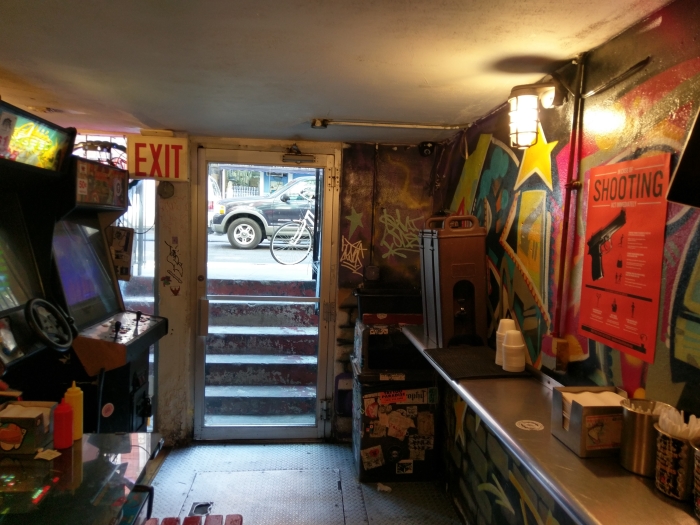 Back at Whiskers Holistic Petcare, owner Klein is nodding. She takes a poster and says she’ll display it in the store. Gargano, curious about the effect the campaign is having, asks Klein if the poster shocks her at all.

"Is this shocking?" Klein responds, incredulous. "No, sorry but it’s not shocking. It happens all too often."

Watch: Magnus Djaba on how his global role at Saatchi & Saatchi will be different

The Grand Effie that nearly wasn't