The high school stars of a new campaign from Barkley may not be winners, but don't call them losers

Second place is the first loser, the saying goes. It’s a mantra subconsciously repeated in most sports-related advertising: The sweat, the pain and the struggle are worth it so long as it leads to success. Tim Tebow doesn’t get endorsement deals anymore, never mind the thousands of NFL hopefuls who never made it to the league in the first place.

But a new national campaign for sportswear brand Russell Athletic features high-school football teams across the country that barely lost their state championship games. The "Team On" campaign positions loss as a both a great teacher and a powerful motivator. And Russell Athletic is hoping that message can help reinvigorate the youth sports market, the 114-year-old brand’s bread and butter.

"These are powerhouse teams with amazing coaches and entire towns behind them, but they fell just short. We wanted to tell their story of coming back strong," said Berk Wasserman, creative director at Kansas City agency Barkley, which created "Team On" with Ketchum Sports and Entertainment. "Instead of forgetting the loss like they always say, what if the team embraced it?"

A 60-second video by Barkley tells the story of one of the six teams highlighted in the campaign. Last year, the Dragons of New Palestine, Indiana, overcame a 28-point deficit in the championship game, only to lose in the last 8 seconds.

The campaign forces teams that have signed on with Russell to remember the losses. It includes billboards strategically placed near each school with reminders like "8 Seconds" or "24W — 1L," which commemorates when the Flyers of Maria Stein, Ohio, came just 2 points shy of a 25-game perfect season.

Just before this year’s football season starts, the teams will tear their billboards down. 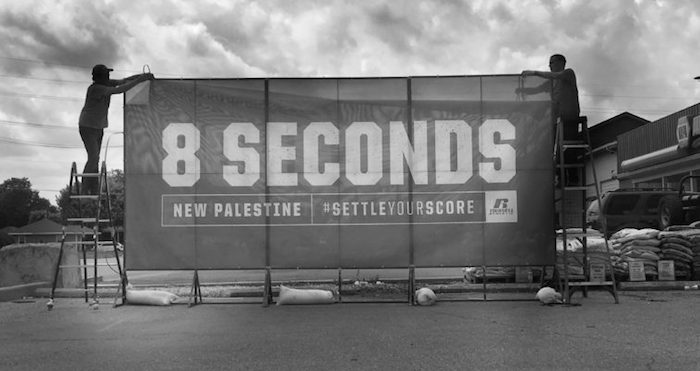 Russell Athletics partnered with Robert Clark, the photographer responsible for the pictures in the original "Friday Night Lights" book that chronicled high school football culture in Odessa, Texas. Clark will train student photographers to capture their team’s efforts to redeem themselves. Clark himself will be documenting the Dragons’ season as they try to win the title they came so close to grasping last year.

"His ability to capture the raw emotion of the players and coaches he photographed created some of the most powerful sports images of our time," Wasserman said. Clark’s photos will appear on the Russell Athletics website, social media accounts and the campaign content hub with the hashtag #SettleYourScore.

Heisman Trophy winner Eddie George serves as the brand ambassador and appeared at a press conference on Thursday to kick off the campaign. But George is no stranger to narrow losses. Super Bowl XXXIV in 2000 ended with his Tennessee Titans just a yard shy of forcing the game into overtime, a play now immortalized with the moniker "One Yard Short."

Youth participation in sports dropped 4% between 2009 and 2015, an alarming trend for Russell Athletic, which is the uniform supplier for Little League baseball and is heavily invested in the college uniform market.

"With these challenges, Russell Athletic needed to get beyond the gear and stand for a larger ideal — to become the expert and defender of team sports in America," Wasserman said. "Telling their stories will inspire and encourage participation for the next generation."

Barkley created the campaign assets with the future in mind. The content hub can be repurposed at some point for other sports, and the "Team On" tagline and the four red X’s logo are permanent additions to Russell’s design aesthetic.

"Our campaign has a simple model that will be extended into other sports: Tell the untold stories of high school sports," Wasserman said. "Take actions to help real teams overcome anything in their way."

Nissan's "Heisman House" is back, with newcomers Derrick Henry and Tim Tebow

At the NFL and Moët Hennessy, collaboration leads to insight and impact