It’s official: America hasn’t been this divided since the Civil War.

That’s the scariest factoid that came out of Grey’s four-month "Famously Effective Business of Togetherness" study, which researched how brands can best market unity.

Working with marriage counselors as well as video ad-tech firm Unruly, the WPP shop found that consumers are craving a solution to the unrest (much of which escalated following the 2016 election, bizarrely…).

"We found that almost two thirds of people were totally disgusted with the way things are -- ‘sick to their stomach’ was the scale that they used," said Suresh Nair, global strategic planning director at Grey. "People are desperate for a solution. And they’re looking for institutions, brands, people to step up and lead and show them the way."

Research found that 88 percent of the 1,000 people who took part in the study agree with the statement that Americans must unite and come together, although the process is a difficult and painful one. A total of 63 percent of the country is united in our dissatisfaction with its current state.

Meanwhile, 60 percent think brands should try to bring people together, and half believe they should stop getting political.

"We don’t believe that brands should get political," Nair continued. "It was crystal clear that consumers don’t want that. I don’t think politics has ever helped us come together -- in this country and others -- so it’s not a marketing tool."

That means no cheap shots at Donald Trump -- brands that take a side in politics risk losing a segment of their consumer base.

So how can brands best market togetherness? Grey suggests a tripod approach:

Commit to the cause
Don’t jump on the bandwagon. Be part of the conversation, but only in a way that aligns with the brand’s core values and voice. Togetherness isn’t a topic of which to be taken advantage.

Creativity
Bolster the brand’s message with creative firepower, obviously. It’s all about the inspiration that focuses attention in the right way.

Action
Talk is cheap -- brands must get off their backsides and follow-up their message with action.

General Electric (GE) fused these pillars with a campaign in 2017 that honored female scientists. Their message was brought to life with a three-day installation in Grand Central Terminal called "Unseen Stars" in which faces of distinguished women working in science were projected onto the ceiling. The celebration was topped off by a commitment from GE to increase the number of women employed in technical positions by 2020.

Grey quizzed participants on seven story narratives for togetherness: rags to riches (the U.S. nation was founded as a beacon of democracy and the current divisions can't change that); overcoming the monster (we embody the most powerful country on the planet and will only thrive by confronting and overcoming those who try to divide us); rebirth (as people, we've lost our way, but by returning to the shared values that made us great in the first place, we will come together to rise again); comedy (we are divided but we've been divided before and we'll be okay in the end, despite all our problems); tragedy (we are divided and will remain that way, leading to decline or disaster); journey and return (embracing our diversity and learning from each other are the ways we will come together and thrive) and; quest (we must unite and come together -- it will be a painful process but in the end we will be a stronger and happier country). 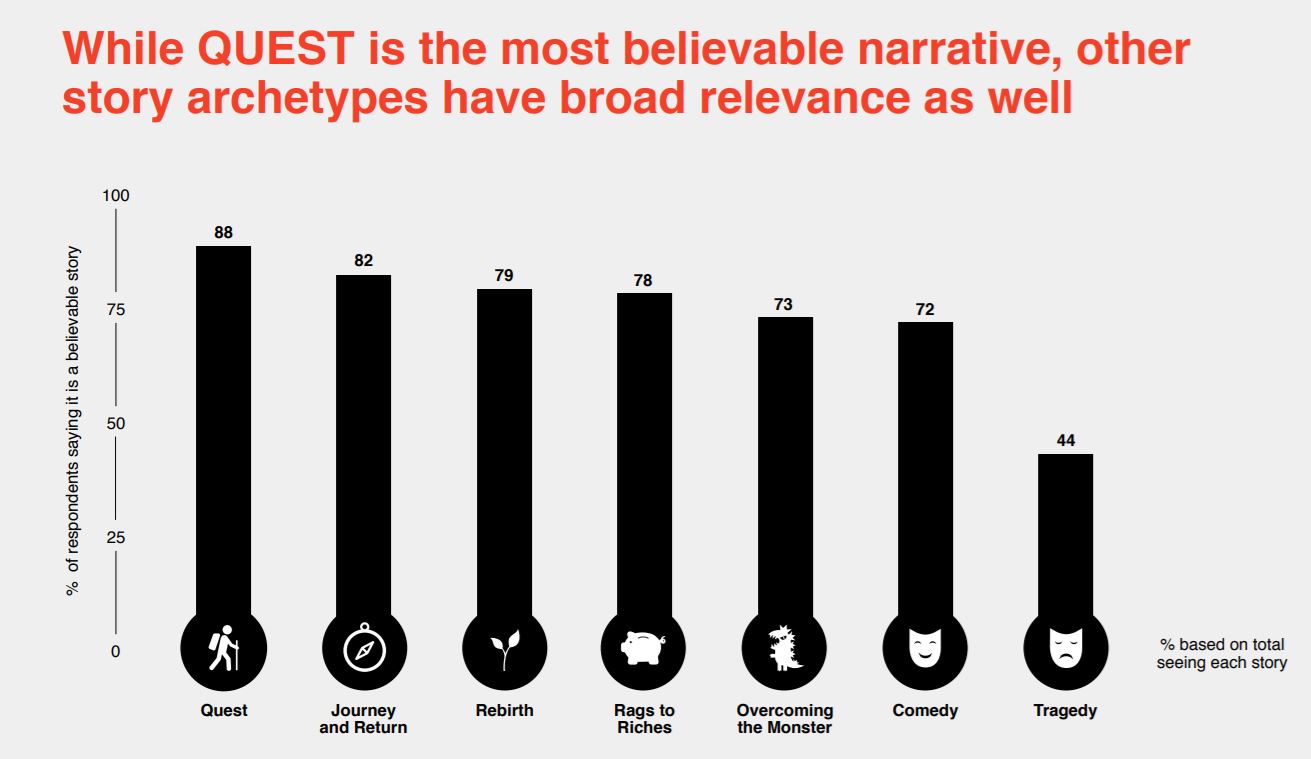 Of all these, quest came out on top in regards to what Americans feel is the most believable narrative. Tragedy -- a story format overplayed by mainstream media -- was in dead last.

"When you attempt to step into this very complex issue, you cannot hope to solve it with a beautiful piece of film," said Nair. "It’s not really the job of brands to solve the social issue, whether it’s togetherness today or something else tomorrow. But they can approach the conversation as long as what they’re saying has a real and genuine connection to what the brand already performs in people’s lives."

As well as grilling participants in the presence of marriage counselors from Adam’s Egg (who acted as moderators), Grey pulled data from Unruly, which tested 6,000 respondents to determine the emotional impact of select ads promoting togetherness through its content testing tool UnrulyEQ.

"Authenticity is everything," said Unruly CEO Norm Johnston. "It covers everything from brand’s messaging, carbon footprint, CEO’s reputation, charitable causes and so much more.

"At Unruly, in addition to metrics including emotional response and brand recall, authenticity is one of the most important metrics we test for with our content testing tool UnrulyEQ. In a post-truth era where trust is at an all time low, it’s more important than ever to create advertising messages that are true to your brand."