Retailers are battling for the attention of the public during the most important trading period of the calendar year, but which Christmas campaign won the hearts and, potentially, the wallets of the public?

PRWeek asked analytics firm Talkwalker to track the performance of Christmas campaigns from Waitrose, John Lewis, Tesco, Sainsbury's, Marks & Spencer, Aldi and Lidl for three weeks from 4 November, when the first of these was launched.

The company tracked online conversations on social media channels, news sites and blogs to arrive at its conclusions. 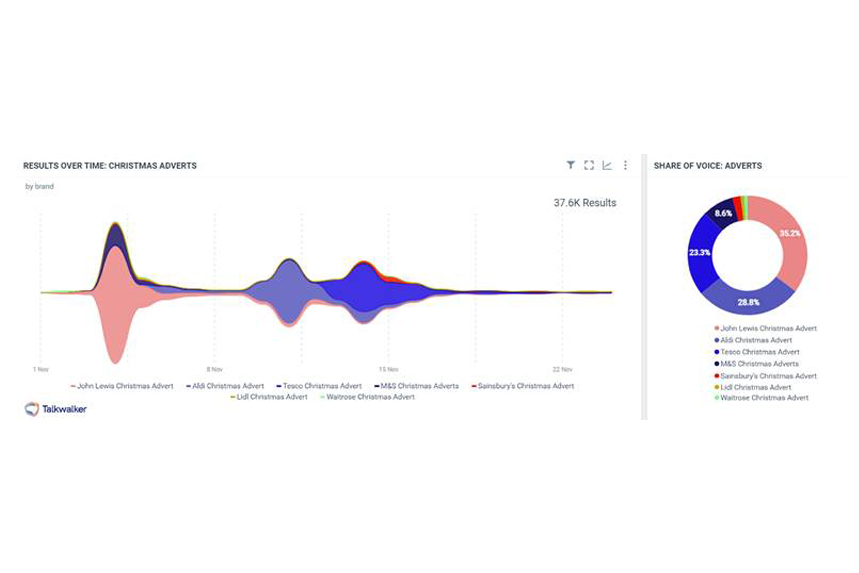 A vital metric for any Christmas campaign is the share of voice it achieves and its ‘talkability’ among the public.

According to Talkwalker, the John Lewis campaign won 13,200 mentions across the channels it tracked – more than a third of the total.

The campaign depicted Christmas through the eyes of an androgynous alien who has crash-landed on Earth, and their friendship with a young boy.

Its nearest rival was the Aldi campaign, which received nearly 10,800 mentions and 28 per cent of the total, followed by Tesco, with 8,700 mentions.

The other campaigns received about 13 per cent of total mentions between them.

Talkwalker said John Lewis benefitted from being the first of the campaigns it monitored to launch, but that Aldi and Tesco grew in mentions as theirs were launched and shared across social media.

Once the creative work that goes into producing a Christmas campaign is complete, the retailer’s social media team has a vital role to play in launching it into the feeds and minds of the public.

By this measure, Aldi’s social team won the battle, with its launch tweet receiving nearly 45,000 engagements. 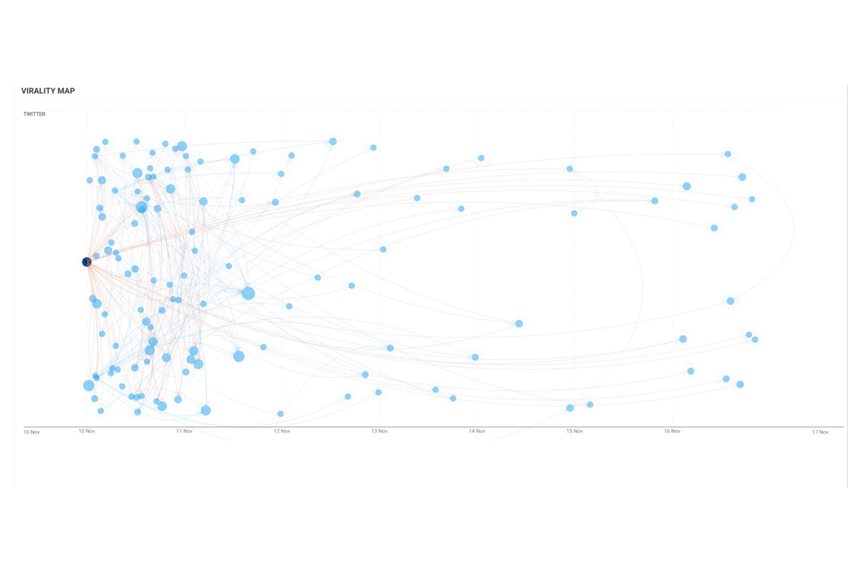 It shows that most of the engagement took place within the first 48 hours after launch, but that people were still liking or commenting on the tweet a week later. 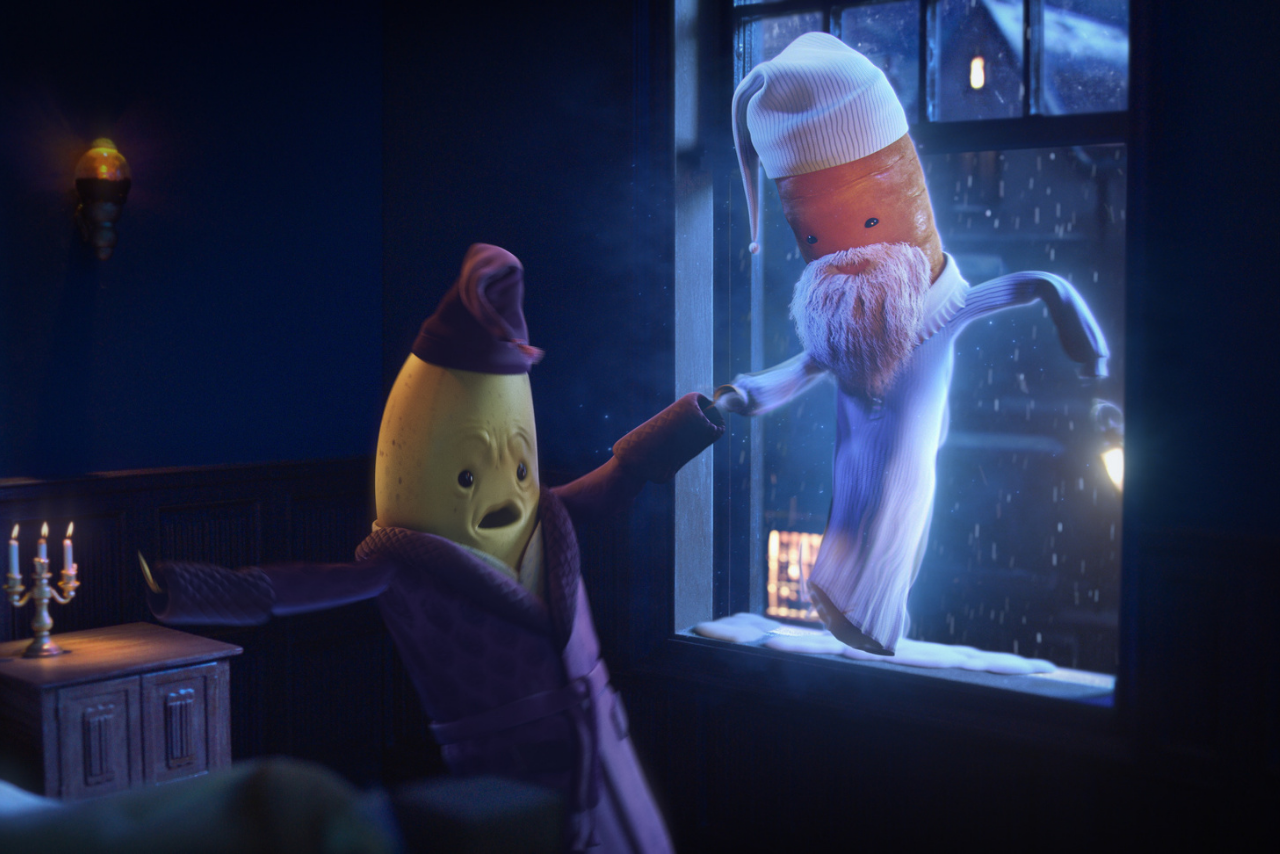 The campaign also contained a strong social responsibility element, with a pledge by the supermarket to donate 1.8 million meals to UK families in need this Christmas.

Talkability and engagement with a Christmas campaign are vital metrics, but not all of these conversations are positive in nature.

John Lewis faced a backlash to its campaign when a small number of social media users criticised its use of a black family and threatened to boycott the store for using a diverse cast. 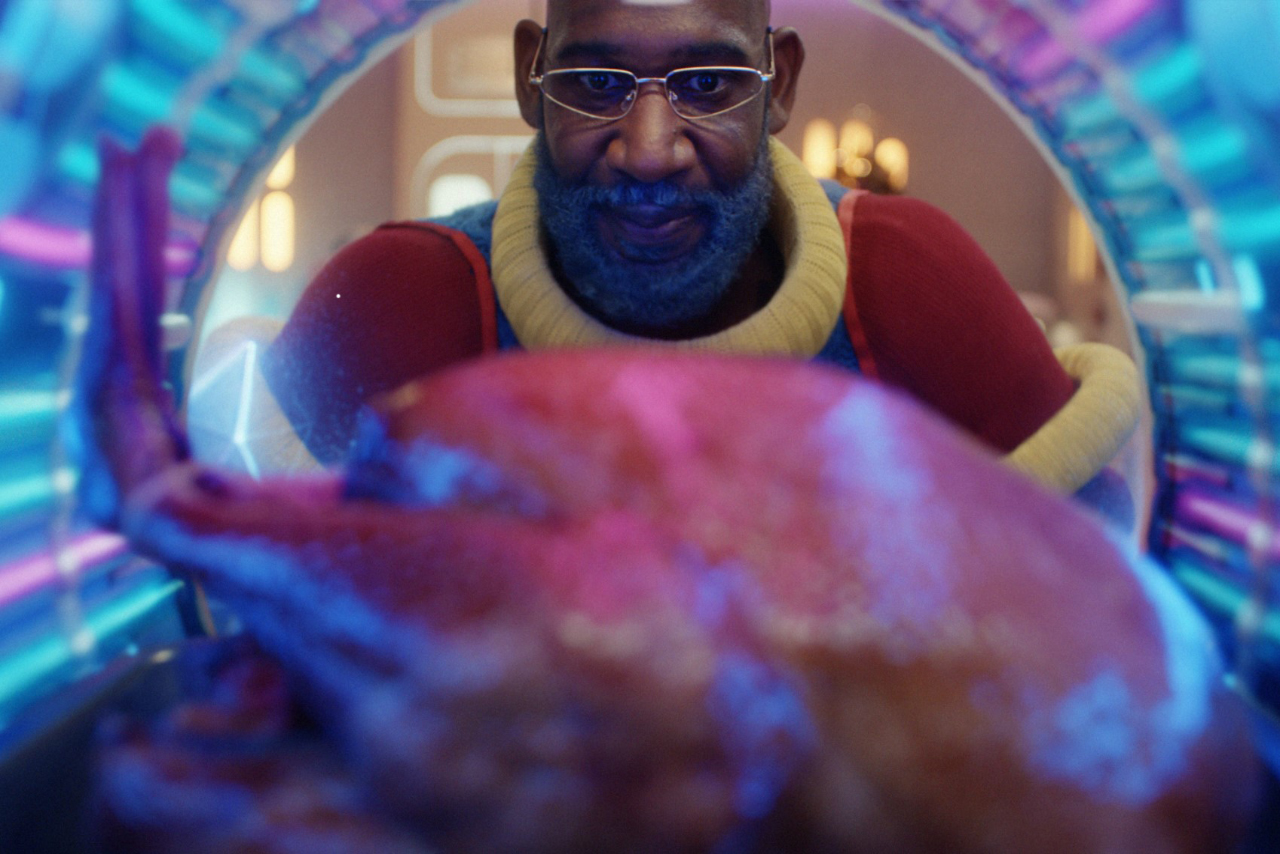 Lidl’s vision of Christmas in the future (above) – featuring laser knives, space jumpers and a dog with special powers – won the highest positive sentiment, at 76 per cent, followed by the Sainsbury’s campaign on 61 per cent and M&S on 60 per cent.

Talkwalker tracked the nature of the conversations about the featured campaigns using AI tools.

Much of the online discussion was about the public’s reaction to the different campaigns as they launched, but another significant aspect was about their use of celebrities and influencers, such as Marcus Rashford in Aldi’s offering and Tom Holland in the M&S campaign.

Some of the conversations were in anticipation of new campaigns, or else centred on characters like Kevin the Carrot, or Aldi’s meal-donation pledge.

The graph below shows the key drivers of the online conversations. 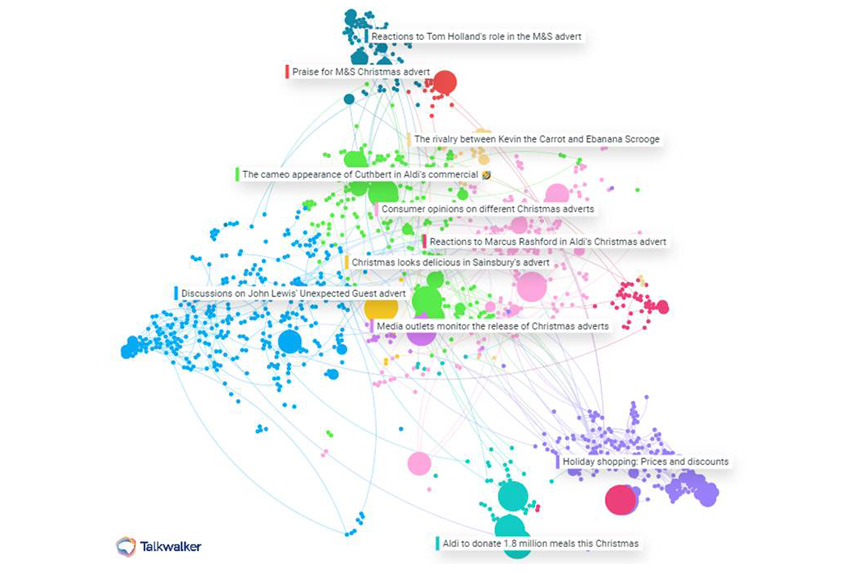 The larger distance between dots from the same cluster represents less content similarity, such as differing views about the John Lewis campaign, for example.

Talkwalker said clusters that are more compact show there was more uniformity in the opinion of posters.

Clusters in the middle of the visualisation are more connected with the overall network, meaning that their concept was more central for the rest of the clusters.

By demographic, three quarters of the conversations about the Christmas campaigns were led by 25- to 34-year-olds, or 18- to 24-year-olds. 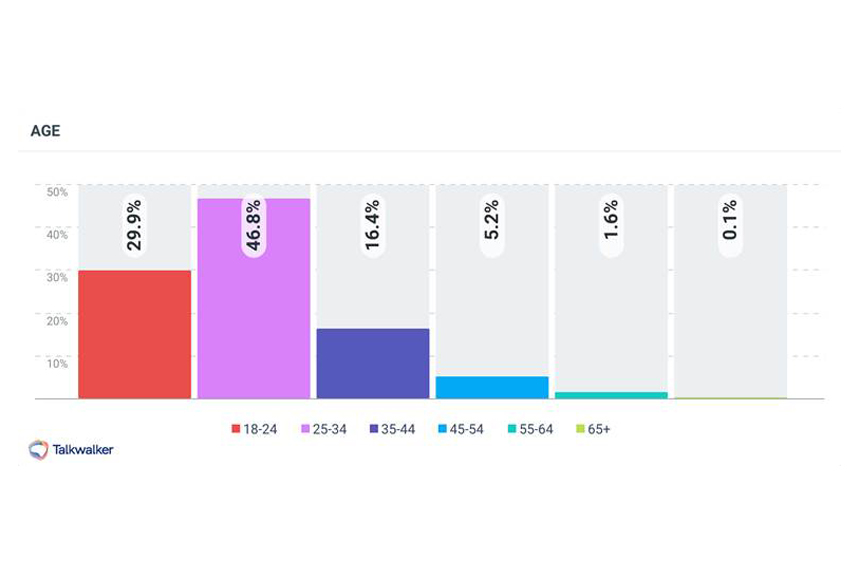 Commenting on the data, PRWeek Christmas campaign panellist Nick Woods, partner at Sunny Side Up, said he thought media spend would have had a “strong correlation” with social volume.

He added: “But John Lewis still holds the greatest anticipation, so it’s little surprise it got more online mentions than its nearest rival.

“That Aldi came second in online mentions and had the single biggest tweet of all supports what many people felt – building a fuller campaign, with action on top of pretty words, is what works… Take a bow Aldi, best overall campaign."

ITV ad urges people to listen to loved ones this Christmas

Why Vodafone opted for purpose over sentiment this Christmas

Pick of the Week: Waitrose says what we’re all thinking with its Christmas ad