The Recommendation Engine is Campaign US' weekly feature in which we learn about the media that young people in the ad industry are currently consuming. This week, we get to know Sarah Gabbart, a content director at The Black Sheep Agency.

What I’m watching
I like TV. No, I love TV. I love it. Right now, I’m hooked on a Dan Harmon show called "Rick and Morty." It’s a wild adventure through time and space—like an unhinged Dr. Who. There was an episode recently, I kid you not, where the main character, Rick, is turned into a pickle (Pickle RIck!) and he battles his way through the sewers. It’s insane and brilliant. I love weird shows like that. They surprise you. It’s why "Community" is still one of my favorite shows. The writers have such imaginations and don’t bind themselves to what’s normal. I like shows that defy expectations and take risks.

Like a lot of people today, I’m a cord-cutter. I don’t have cable. I have a Roku that brings Netflix, HBO, Amazon and YouTube right to my TV, allowing me to watch all the shows I want to check out. I spend a lot of time on YouTube watching stuff like "Travel Man," a British travel show hosted by Richard Ayoade of "The IT Crowd" fame. The tagline is "We’re here, but should we have come?" He invites comedians to join him in exotic locales, and it’s a whole lot of fun. It’s a good way to catch a hard case of wanderlust, start trawling Google Flights and texting your spouse about the next five vacations you want to take. "Babe: Croatia. We’ve gotta go there right now!" (He knows who he married.)

Also, is there anyone not watching "Game of Thrones"? Because I’m parked firmly on my couch each Sunday and sailing for Westeros. (Valar morghulis, y’all.)

What I’m listening to
Josh Ritter, Sturgill Simpson and First Aid Kit are in perma-rotation on my Spotify, but during the work week I confuse the heck out of my Discover Weekly. I’m married to a jazz musician, so the value of music isn’t lost on me. It really has the power to change the way you think and, by that, change the way you create. I like to use music to cue up my writing work—it affects the tone of my writing. If I need to be straightforward and succinct, I put on Kendrick Lamar. If I need to muster up some conviction, I dial into Bob Dylan. If I need to be more reflective and a bit softer, I put on Satie. If I need something upbeat, I listen to Rebirth Brass Band. Music really has the power to help you empathize with your audience, get into the right mindset and do better work.

What I’m reading
Lately, I’ve been really into children’s literature. Children’s books are elegant in their simplicity and stunningly creative. Kids have such great imaginations, and writers seem to relish in a kid’s ability to transport themselves to new worlds. Neil Gaiman, in particular, has been a recent obsession of mine. From "Coraline" to "The Wolves in the Walls" to "The Graveyard Book" and "Trigger Warning"—he writes for kids, for adults, for adult-like kids and for kid-like adults with the same commitment to the weird, the wild and the intense.

I have a bit of a self-help habit. Empathy is so important in writing that I’ve started consuming everything decent in the genre from "You are Here" by Thich Nat Hahn to "The Subtle Art of Not Giving a F*ck" by Mark Manson. It’s important to understand how other people approach life so that you can broaden your worldview—and so you can, you know, be less of a jerk.

Who I’m following
Facebook is my greatest time-suck, so I’ve recently deactivated it. We’ll see how long that lasts, but I can say getting off that train has improved my mental health and outlook quite a bit. I love the sense of connection you get with Facebook, but I hate the superficiality of it. It’s like eating a crappy donut—all sugar and chemical fillers, no real nutrition.

Twitter has never been something I’ve actively participated in, but I’ve been on the site since 2008. I tend to drop in, look at people fighting for a second, shut the browser window and stare out a window for a second. It’s just too much.

If Instagram is a window into a modern person’s soul, mine is just a big blob of pugs. I follow an insane amount of pugs. I’m actually concerned about how many pug accounts exist and have thousands of followers—is that really sustainable? Anyway, pugs. And food. I follow a lot of food accounts. My soul is comprised of donuts and dogs.

Who and what I’m ignoring
Baseless negativity—trolling and the like. There is way too much of that going on these days. There’s too much to do to be fighting all the time. My favorite meme is a goat with shades on that reads, "Don’t goat time for the haters." I think that goat is my life coach.

If I see garbage come through my feed, I’m unfollowing you. Speak up and speak out for sure, but don’t attack, complain and abuse people. 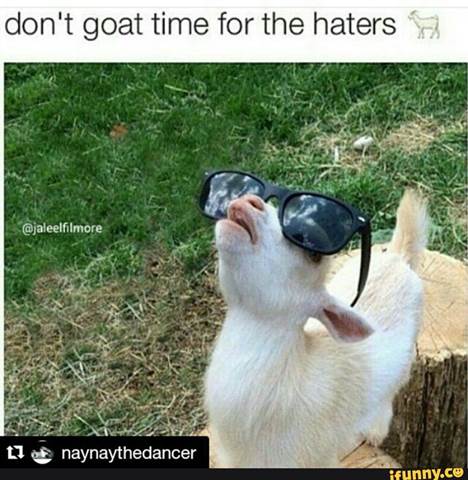