If there is one theme that emerges from the marketing stories of 2013, it is "trust".

Unfortunately, this is not a concept that tends to make news in its positive form. The steady maintenance of a virtue that is supposed to reside at the heart of every brand is hardly a matter to excite comment. It is the breach that captures headlines.

And what headlines: "Horse in school dinners"; "Taxpayers face £500m bill for Libor fraud"; "£25m pay-off to BBC bosses"; "Archbishop declares war on Wonga"; "Fat-cat energy firms give two fingers to us all". Over the past 12 months, they have barely stopped coming: breaking news, broken brands.

The question, as we head toward 2014, is what can marketers do about it? How can we all ensure that our brands, and the categories they represent, earn back that most fundamental and valuable of assets from our customers?

Well that’s simple. We can keep our promises. We can ensure that our brands are exactly what they purport to be, and do precisely what they claim to do.

We can ensure that our brands are exactly what they purport to be, and do precisely what they claim to do.

There are only two basic ways to achieve this. One is tough, bordering on impossible: it is to work tirelessly within our Byzantine organisations, muscling in on disciplines over which we exert no control, policing supply chains that span the globe, to honour the breathless brand claims we currently make: "Looking after your world"; "On your side"; "Love every mouthful"; "Power to you".

The other is to make smaller promises.

This is the more realistic way to go, but will not come naturally to marketers reared on hyperbole and grandeur. Look what happens now, as brand teams gather alongside their agencies to devise marketing themes. It’s a kind of arms race, as routine concepts are tolerated only as "starters" to be "pushed", "differentiated" or "taken to the next level".

It scarcely matters what humble task the product actually performs, the aim is always to evoke life’s big themes. These days, we don’t just "ladder up", we take the elevator, hoisting our brand to the pinnacle of Maslow’s pyramid in the matter of a moment.

There we stay, our heads in the clouds of "self-actualisation", failing to notice the "out of order" sign that has been hung on the ground floor, down at the level of serving basic human needs.

To keep our promises, we must break these habits. We have to be humbler, simpler and more realistic in how we depict the role of our brands in people’s lives, matching our claims to what we can control.

Many marketers, and most agencies, will argue that this will blunt their ability to inspire consumers and gain emotional appeal. I’m not so sure. In a single recent edition of The Times, I noticed two ads that could point the way, utterly refreshing in their candour and simplicity.

The first was for Sainsbury’s, which took a page to inform us that its basic mineral water is, indeed, water that has passed through mineral-rich rocks. With its chaste art-direction and straightforward prose, it proffered that tautology to draw distinction between its product and the same-priced Tesco Everyday Value water, which "starts at the mains".

The second ad, in a much smaller space, was for the upmarket wine merchant Berry Bros & Rudd, showing a bottle of its Good Ordinary Claret. The headline was "Not the greatest wine ever made", leaving the copy to point out that it is, nevertheless, something good to drink for £9.

If we’re honest, most of us are custodians of good, ordinary brands, which we attempt to sell for prices somewhere in the region of reasonable. We could do worse than find charming ways to say just that, keeping our promises in line with our powers to deliver, earning a bit more trust, and somewhat fewer headlines.

Food retailers and manufacturers were first in the firing line this year after the horsemeat scandal broke. Over the following months, trust in the food industry declined 24% (1). Spending behaviour backed up this shift, with sales of frozen meat burgers nearly halving.

February
The banks’ already poor image took a further battering in 2013, with 72% of UK consumers claiming not to trust them (2). The Libor scandal came to a climax in February when RBS was fined £390m for rate fixing. RBS’ tagline, which claims the bank is "Here for you", has never seemed less apt. 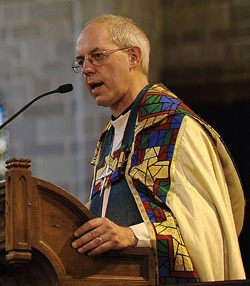 June
After continually making headlines for offering "predatory" and "misleading" short-term credit products at annualised rates of more than 5000% (3) – a rate at which, personal finance expert Martin Lewis calculated, borrowing £100 would lead to repayments worth more than the entire debt of the US in just seven years – payday lenders including Wonga were called to a government summit to discuss "widespread irresponsible lending". An unlikely candidate weighed in to the debate: the Archbishop of Canterbury (pictured, right), who vowed the Church of England would offer an alternative to payday loan companies by expanding credit unions.

July
After BBC director-general George Entwistle resigned in 2012, following the Jimmy Savile scandal and a Newsnight report that falsely implicated Lord McAlpine in a separate child sex-abuse case, another furore ensued regarding Entwistle’s severance package, and £25m-worth of pay-offs (4) to 150 other outgoing executives. Several senior BBC figures were summoned to the Public Accounts Committee, which summarised that the reputation of the BBC had been "damaged".

October
This year’s hefty energy-price increases happened mostly in October: Npower announced a 10.4% hike, adding £137 to the average household’s bill5; British Gas, Scottish Power and SSE quickly followed suit with similar rises. Ofgem reported that almost £100 in every bill is now pure profit6. Subsequently, energy became the industry with the lowest level of consumer trust, according to a study published by Which?
on 3 November.

Why slow website speed is a problem for marketing, not just tech teams

Helen Edwards: Marketers must gain share of mind within their own organisations

Helen Edwards: Amid the social-media euphoria, marketers must ask some basic questions

Helen Edwards: The true meaning of 'customer insight' - and why marketers should treat it with care