The figures reveal that Absolute Radio’s network of stations recorded their highest weekly reach in 12 years, which Dickens attributed to the Euro 2012 tournament and the breakfast show.

The other Euro 2012 commercial radio broadcaster TalkSport reported an audience decline in the second quarter but Bullock said this could not be attributed to the tournament, which "didn’t have a positive or negative impact".

Park praised the success of the Dave Berry and Lisa Snowdon 95.8 Capital FM breakfast show, which beat Johnny and Lisa in the second quarter of 2011, the growth of the Capital network and increase in listening hours at Heart.

The fight for primacy in the London market is always tight and Parkinson noted that Magic’s fall in listening hours was replicated among similar stations targeting older listeners, such as Smooth Radio. 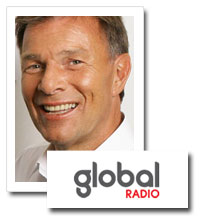 "Dave and Lisa are up year on year which is good to see as we’re still building the show. They are a very entertaining start to the day for London. Capital has the highest reach in London of any station in the 15 to 44 age group which is great as we’re selling advertising to people who want to reach young mobile London.

"The overall radio market was down and so other stations were down with that and our position has pretty much not changed although Heart increased its total hours. Changes at our stations outside London take a big longer to have an effect because we report on six month periods but I would say we’re very much on course." 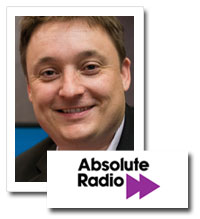 "Absolute Radio has achieved the biggest audience for the business in 12 years. We had a significant boost by the Euro 2012 and the breakfast show. We put our football on [London] FM for the first time and most of our growth was in the London market.

"The Christian O’Connell 'Breakfast Show' has been growing for the last few years. It picked up breakfast show of the year at the Arqivas last year and a silver award at the Sonys this year. Now Johnny’s off Capital breakfast and Moyles is leaving BBC Radio 1 Christian will be the last man standing." 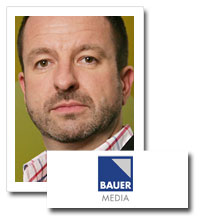 "This was a good quarter for Bauer Media’s passion portfolio with Heat and Smash Hits performing well. Many of our place portfolio stations performed strongly but we did loose listening hours at Magic.

"This quarter was one of the oddest books for London. 13 million hours have disappeared and particularly in the over-54 age group and that amount of listening does not just stop. Magic, Kiss, Capital and LBC 97.3 can’t all have lost hours at the same time but you have got to take it on the chin and move on." 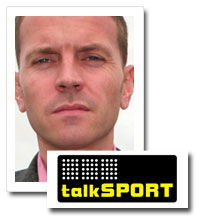 "The short Euro 2012 tournament and irregular programming didn't have a positive or negative impact on our listeners (it was a two week tournament in effect). Elsewhere, weekdays delivered and drive-time recorded a record audience in the second quarter.

"We lost all of our listening on Saturday and Sundays where our FA Premier League and general footy programmes sit. We also feel in line with general radio decline, bank holidays and Jubilee had an effect driving listening away."

RAJAR Q2 2012: TalkSport among the fallers in tough national market