The robust growth in adspend made Q1 2018 the strongest first quarter in three years.

Almost all digital channels recorded a notable increase in spend, with video on demand up 11.9%, national newsbrands’ digital revenues up 2.9%, and regional newsbrands digital rising 16.6%, although magazines saw digital spend down 4.5%. 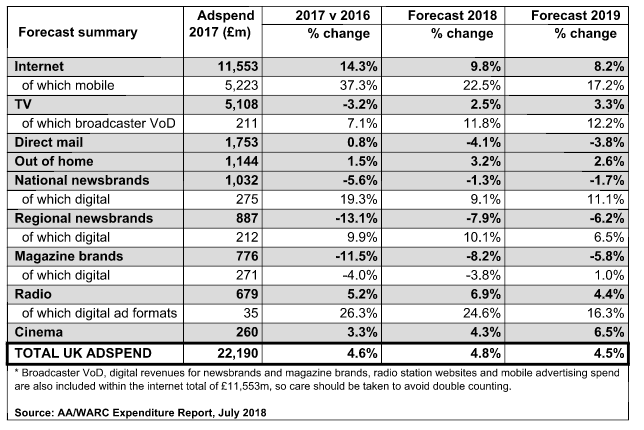 "If Government can secure a good outcome from the Brexit negotiations and introduce a business-friendly immigration policy, we should continue to see sustained UK market growth and continued export success for advertising." 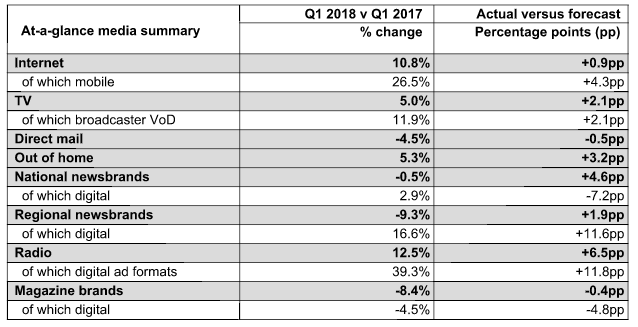 Ruth Cartwright, head of AV at Amplifi, said: "Radio has historically been an undervalued medium – so it’s incredibly gratifying to see it getting the commitment it deserves from clients and brands giving it a central role in their media mix.

"The growth of digital audio and the realisation that audio is fraud-free, non-skippable, and provides a safe environment for brands, has hugely increased audio’s appeal to advertisers."

The latest figures do show a downturn for cinema, which was down 12.8%, while direct mail dipped 4.5%, but these haven’t impacted on overall growth in Q1 adspend.

Matt Whelan, digital strategy director at The Specialist Works, added: "The more that audience-targeted digital display is put under the microscope and compared to offline media, the less it stacks up when it comes to driving customers to take actions through Google, Facebook and the other demand harvesting channels.

"Radio and television particularly excel at this, so no surprise to see growth here alongside printed media."

Luke D'Arcy, UK president at Momentum Worldwide, pointed out: "While digital still dominates, the growth of more traditional advertising channels is a symptom of brands having moved past the ‘digital gold rush’ of the past decade or so, and starting to think more broadly about the total brand experience, and all the touchpoints that their audiences engage with – whether that’s in person, over digital channels or via more traditional media."