It’s been a busy year for Alex Leikikh. In May 2015, his agency, Mullen, became the latest Interpublic Group brand to attach itself to Lowe and Partners, the venerated agency network that can never quite crack the US market. For Leikikh, that meant expanding his team from 640 to 6,400 ("I added a zero," he notes) and leaving the relatively cozy confines of Boston for, well, the rest of the world.

These things take time to succeed, or fail, but there are signs of progress. Within weeks of the merger, the agency won Royal Caribbean’s creative business, a pairing that got people talking in November when it used Periscope to live stream cruise adventures to digital billboards all around the world. In March, Hyatt consolidated global creative duties for all 12 of its brands with MullenLowe Group.

In January, MullenLowe debuted its new logo, the "Challenger Octopus," a pugilistic cephalopod meant to represent both the agency’s "hyperbundled" approach — separate units for media, digital, advertising and shopper marketing working tightly together — and its desire to "punch above our class," as Leikikh likes to say. Reactions were mixed.

On Wednesday, Leikikh sat down with his new Global Chief Strategy Officer, James Fox, who spent the past six years as CEO of Red Peak Branding, part of Hakuhodo’s rapidly expanding kyu group of companies. For Leikikh, the hire represents another reunion with one of his old Fallon buddies; Lee Newman, most recently president of Ogilvy & Mather in Chicago, came aboard in June to assume Leikikh’s old job as US CEO. (In another bit of agency symmetry, Fox’s replacement at Red Peak is former Lowe CEO Susan Cantor.)

Leikikh and Fox talked about the future, agency strategy and why anyone would leave a CEO job to be a CSO.

How has your first year been as a global CEO?
AL: In some markets things are going very well. Our operation in India is just world class. They've got great recognition and continue to grow. They just won the grand Effie in that market. The work that we're doing there for our client Unilever is really some of the best of the work that we're doing in the world.

China still isn't consistently stable. Our operation in Australia is really strong. Everyone knows what's going on in Brazil, in terms of the economy, in terms of the political situation there. Historical foreign exchange issues in Argentina. It's really a challenging job, a steep learning curve.

There are cultural nuances in each market. There are always hiccups here and there. A couple of markets were spooked by the octopus with boxing gloves, and we've gotten over it. We've tweaked our identity a little bit to make it a bit more digital.

The good news is the US is strong for us and has been historically for Mullen and now for MullenLowe. In some cases, as the US goes, the rest of the P&L goes. We're positive about the economy here in the States and how the business is performing.

Have you encountered any wariness among the Lowe staff about the constant re-partnering?
AL: Yeah. Let's just call it what it is. This was Round Three. I couldn't afford this to be a strike. The union between Deutsch didn't work out, and the union between Campbell Ewald didn't work out. But I think there are definitely signs that we're making progress.

The Hyatt global win is a good check mark. We're starting to push existing US client business into key international markets. We're starting to see more clients outside of the US come into the States. Our people are spending a lot of time together. We're pushing MullenLowe MediaHub into some of the key markets as part of our bundled offering. We're sharing talent. We're doing hothouses in the US and in India and in Argentina and Spain and all over the world really.

The strategy is to have all four practices together in every office around the world?
AL: Yeah.

It’s a bit counterintuitive to have a separate digital arm these days.
AL: I agree.

Why stick with that?
AL: I think it's counterintuitive to have a standalone digital arm that isn't linked to any of the other areas. I think what we're looking at in the years to come is a great rebundling, the notion of maximizing the brand over maximizing the channel.

James, you’re going from a CEO role to a CSO role. That had to be a tough decision.
JF: It was a hard decision, but I think MullenLowe is a very special kind of agency. It's truly global. It's as integrated as any agency out there and going to become more integrated as they move forward. Those two things are rare. The opportunity to work with my friend, someone who I know champions great work and is now running the entire business around the world, it made it a much easier decision in that sense. 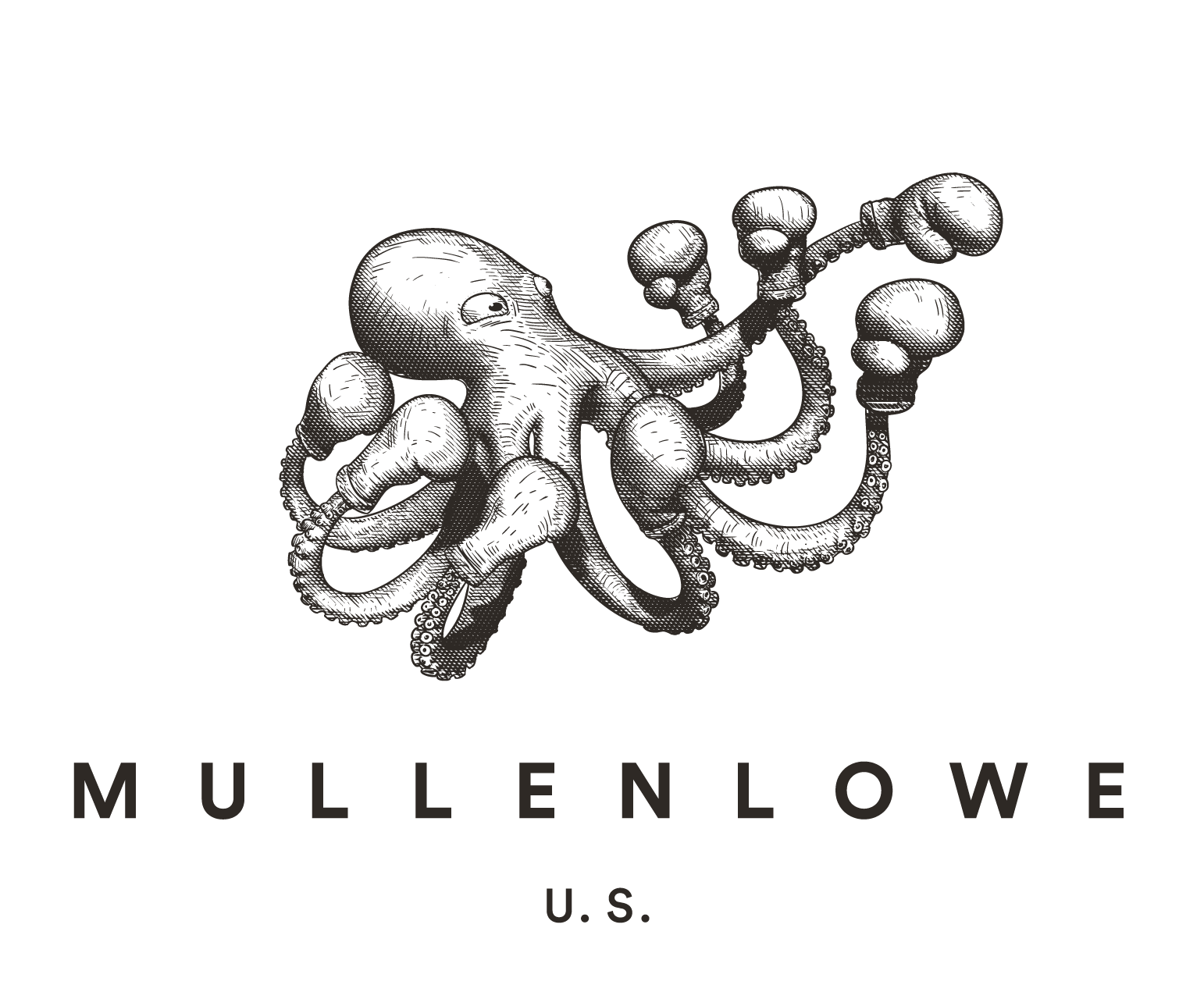 Talk to me about the boxing octopus. There were some snarky reactions, let's be honest.
AL: Have you ever seen a non-snarky reaction to anything in this business?

Well, what was your reaction to it?
AL: We were looking for a visual metaphor to bring together this notion of hyperbundling. We looked at all sorts of different metaphors and characters and animals, and then somebody just came up with an octopus with the boxing gloves on. I thought yeah, this is great. Eight tentacles, punch above your weight, and one brain. By the way, we did a lot of research on an octopus because we knew there would be all kinds of reactions.

They're actually very, very smart animals. I asked James to study the octopus a little bit before taking this role. He's got a point of view on it as well, as a strategist would. It's really a very efficient, intelligent animal.

How are you evolving on the production front?
AL: We are building out a studio in LA called the Yeti Productions. We're going to build out a content production lab because clients want quick turn, high-content work. Our spin on it is going to be that it's tied to the full sweep of offerings, so advertising, digital, shopper marketing, and definitely media. When we go to market and we look at quick turn content and really penetrating culture for a lot of our clients.

JetBlue is a great example. We have a departmental cross-discipline group that meets on a regular basis. They look at what's going on in culture for whatever regions. Then they figure out how to make a piece of content that we can penetrate into culture to get it an unfair share of attention.

You have those ideas because you have media people, strategists, creative people, account people, community management people all together because it's one offering rather than siloed. When those people are together, fueled by that content lab, we can create content instantly and get it up and running. That's the future mode

Does being international help you with content production at all? Might you be better off building a studio in a European city than LA to avoid the SAG/AFTRA issues?
AL: Yeah, it might, I guess, if your intent was to avoid SAG issues. We haven't thought about it that way. We're building one in LA, so we haven't really thought about it in terms of SAG or AFTRA.

You're not finding that constricting?
AL: No, if we did, we wouldn't be building in LA. Right now, we're finding it's just fine to deal with.

When we talked a year ago, you said Mullen had multiple clients that wanted representation in international markets. Have you had success moving clients across borders?
AL: We had four prospects when we talked last year in May. Of those, three have gone abroad. Indeed.com is one of them. The other two we're about to announce. The other two just happened.

What about bringing Lowe’s Unilever brands over here?
AL: Yes, absolutely. We just launched a new campaign for I Can't Believe it's Not Butter in the States. We are working with the Tressemme teams on work here. We're working with the Degree and Rexona, as well as Knorr.

James, what would you say differentiates MullenLowe creatively from all the other networks?
JF: There are a lot of agencies out there that do aesthetically beautiful work, but it's very ethereal and not really rooted in anything. Every single piece of work I've seen coming out of MullenLowe you can tell is rooted in a strategy, and someone has actually thought about the client business. I've worked with a lot of agencies where strategy is something that they charge clients for, but it's not really integrated into the creative process.

Coming into an agency, how do you ensure that strategy is taken seriously at every level, and you’re not just producing a piece of paper that the creatives never look at.
JF: It's not a very sexy answer, but if the quality of the strategic work is good, creatives will use it, account people will use it, clients will buy it and I'll sell more of it. You have to get the best strategic talent and you have to give them the opportunity to think about things in a different way and have a team that can sell that thinking.

In particular, any Mullen Lowe work you can point to that really made you want to come here?
JF: Yeah, the work that Jose Miguel’s been doing in Columbia to bring some of the Farc terrorists back home. If you haven't seen his Ted talk, it's extraordinary. He seems to be the embodiment of creativity here, very open to ideas, very open to strategy, and it is a very simple, elegant idea.