"Music and art itself does not need a goal. It is actually what makes life worth living. It separates us from just being robots."

On September 15, Sonos will launch its latest campaign, "You’re Better Than This," a humorous look at the plight of music fans in a world of tiny devices and tinny speakers. The company has also forged partnerships with Spotify  and Amazon Echo that will bring more options and flexibility to its customers . The goal is to restore the glory of the home stereo system for a generation of audiophiles bred on sub-par experiences.

Joy Howard, Sonos’ CMO, has the job of convincing consumers to unplug from their phones and listen to music within the comforts of home. 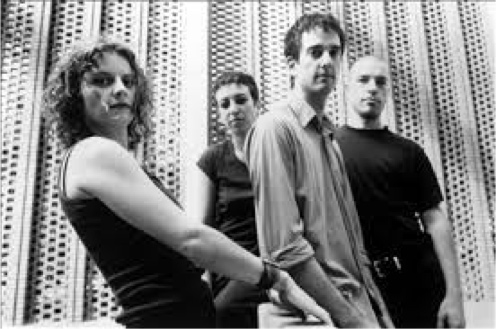 Before all that, Howard was a bonafide rockstar. From 1994 to 2000, she sang, wrote the lyrics and played bass and piano for an indie band called Seely. It all took place during the "post-Nirvana indie gold rush," Howard says, when record labels couldn’t snatch up promising indie bands fast enough. Seely was signed to British label Too Pure, which had discovered PJ Harvey.

But after six years of touring, Howard was fed up. She transitioned into marketing at a time when the idea of bringing any creative person into a company to innovate was new.

Howard spoke to Campaign US about driving change, the struggle to diversify and how she went from playing music to running campaigns around it.

Did your creative, musical background inform your decision to go into marketing?
No [laughs]. I was not focused on marketing at all. But I had a belief that you can use business to leave the world a better place than you found it. And when I started to work in business, I realized that what drives the most growth in a business is marketing, and so I really went into marketing as a way to maximize my impact.

What I’ve found throughout my career is  that even though it seems like I left music behind to go into marketing I kept getting pulled back into these opportunities to really use music. That’s how I started working at Converse. Part of how Converse became a really great brand was by getting adopted by musicians and worn by musicians. I got hired there because I think they wanted someone who could really connect with the creative community.

Have your music contacts helped you?
I was lucky to be part of a very rich and vibrant creative scene and I’m still working with a lot of those creative people that I worked with in the early days. Dmitri Siegel, who is the VP for global brand and the creative director for Sonos, and I were in bands that toured together.

I think you find a lot of people in the field I am in right now who--especially if you are a Gen Xer--never envisioned ourselves selling out and having a bland life. I think we’ve all found ways to use business to make the world a better place by applying our creative energy and that’s what I’m doing.

What is the theory behind Sonos’ marketing?
Advertising can interrupt people, but a really great brand contributes to culture. One of the things we realized early on is that we humanize audio really well. Like really create experiences that are less about the technology and more about human beings. Human beings don’t actually want technology, they want it as a means to an end. And then they want it to disappear.

How does Sonos’ "You’re Better Than This" campaign work to "humanize audio" in the home?
The idea behind this whole campaign was of humanizing home audio. Our spot is composed of mini, 15-second spots. Each of them points to very specific problems people have experienced with listening to audio on their devices.

We very much envision the home as a place to be creatively inspired, a really pleasurable place to be, so we thought this campaign was the best way to wake people up to the idea of actually listening to speakers in their homes.

Did you grow up in a home with music?
Yes, I did! I was contaminated by the musical tastes of my big sister in such a great way, and I think that inter-generational sharing of music is so important for our culture, and we’re really committed to bringing that back.

Sonos relies on partnering with other brands like Spotify. Is that the future of marketing, no matter the brand?
I think it’s definitely the future in tech. For us it’s really critical because we’re just a platform, and without our content partners we would be nothing.

There are several benefits of partnering with Spotify. For us, Spotify paid streamers are the most attractive audience. Having access to a group for whom we can provide the best possible experience is really valuable. And when people play Spotify on Sonos, they listen way more than they did before, so they are much less likely to go to another service. Then, I think, there’s the opportunity to work together to reach new markets that neither one of us are have been in before, which we will be doing later this year.

What’s one partnership you’re really proud of?
I helped create the partnership Converse did with Andy Warhol and the Andy Warhol Foundation while I was there, and that was a project I was really proud of. One of the expressions around Chuck Taylor is that it’s the "blank canvas of self-expression," because of people making them their own by drawing or painting on them throughout the years.

What role is consumer data playing in Sonos’ marketing overall?
It’s pretty important for us, but a lot of our capabilities are still nascent. When we launched Apple Music on Sonos, we launched that around a qualitative experiment about the impact music has in the home. That was our first foray into data-driven marketing, ironically.

Now, we are going to be using it much more effectively moving forward to really try to target people and speak to them in a relevant way in relevant moments. If you look at all the music that we are using in the campaign, it starts to become easy to think about how we can work with streaming partners to target people who are interested in the music that we feature. I think the streaming services themselves are only beginning to unlock the power of their own data.

I would say I was pretty skeptical of that to begin with, because there’s an ideological component to music that makes it really hard for data to parse, but I’m becoming a believer as I see how much more sophisticated it gets.

A handful of clients have lately taken a more active role in helping their agency partners diversify. What’s your take on the issue?
I’m acutely aware every day that I’m in probably one of the worst industries you can be in when it comes to diversity, which is tech. We as a company are really unhappy with how we stand on that internally, so it’s something we talk about a lot. I think in the wake of Black Lives Matter, everyone has been talking about it. There’s no way that you can really connect culturally with a homogeneous marketing team.

And when you think of our own internal lack of diversity and then how closely we work with musicians, it’s really a pain point for us. When we worked with Killer Mike on the "Music Makes the Home" campaign that we launched, I had dinner with him the night before we filmed, and he said he was excited about working on the film because he felt like there were too few images of black fathers in the media having fun at home. He said most of the images are so negative. That really woke me up to the power of what we were doing together that I hadn’t seen.

What should advertising be able to do?
I think advertising has got to mean things for people. I mean, not in a preachy, heavy-handed way, but it should create change through creativity and courage. Change is always in some ways a really radical act because it implies a departure from the status quo.

I think so much of doing great marketing is learning about great marketing, and then you have to throw the rulebook out and think about what’s the right thing to do for this particular moment in time to achieve what you want to achieve in the world.

Was that your goal as a musician, to create change?
[laughs] You know, I think the goal of making art is just to make art. Music and art itself does not need a goal. It is actually what makes life worth living. It separates us from just being robots.

Spotify aims to turn Japan on to music streaming at last

'Sonos Your Home' by 72andSunny