Some heavyweight brands have tried to flag their woke credentials when actions would have spoken louder than words.

Brands that try to attach themselves and their values on to contentious issues such as the Black Lives Matter movement are teetering on a well-trodden and highly perilous path.

It goes without saying that the current situation in the US is deeply disturbing, the killing that ignited the furore was tragic and avoidable, and the Black Lives Matter movement is essential – even if fixing the issue it’s been designed to highlight is long, long overdue.

It was back in 2017 in the wake of a white supremacist rally in Charlottesville, Virginia, that black model Munroe Bergdorf took her stand, calling out white privilege, racial violence and institutional racism. Just a week earlier, she’d been signed as a new face of cosmetics powerhouse L’Oréal Paris – the first transgender model to be offered such a role.

Within days, the brand cauterised its relationship with Bergdorf, claiming that her comments were "at odds with the brand’s values of diversity and tolerance towards all people irrespective of their race, background, gender and religion".

This week, following the death of George Floyd under the knee of a white police officer in Minneapolis, L’Oréal shared a post on its Instagram in which it worthily stated: "Speaking out is worth it – L’Oréal Paris stands in solidarity with the black community and against injustice of any kind."

Bergdorf was suitably pissed that her former employer would try to get away with such flagrant hypocrisy and double standards and, as such, she called it out. Her feelings can be neatly summarised in this exerpt from her tweet: 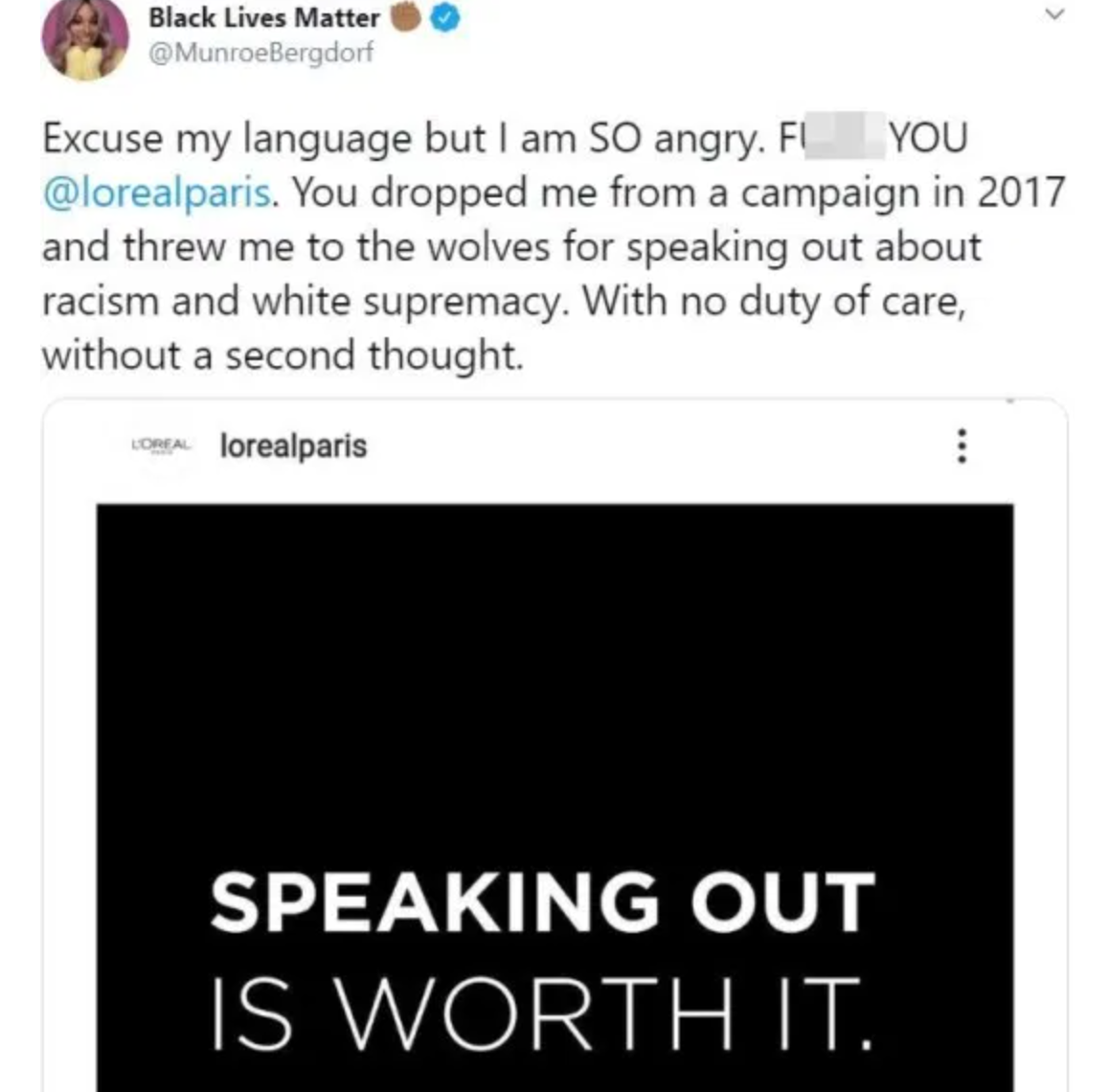 Adidas and Nike, two mega-brands with more clout than most media organisations, have collaborated to back the cause and show their disdain for racism, with Adidas retweeting Nike’s "For once, don’t do it" message. As you’d expect from Nike, the brand that famously found cause with NFL trailblazer Colin Kaepernick in 2018, the digital ad is powerful, moving and slick in equal measure.

"Woke washing" is not a new nor necessarily ineffective phenomenon, but it appears to have become more prevalent and militarised in the age of social media.

In 2015, Starbucks demonstrated its tone-deaf credentials with aplomb when it asked its baristas to write "race together" on cups to encourage debate about racial oppression following the police shootings of two unarmed black men and the ensuing civil unrest.

Pepsi famously nuked its reputation, almost irrevocably, in 2017 when it tried to piggyback on to Black Lives Matter, implausibly employing model Kendall Jenner to diffuse a race riot with nothing more than a can of Pepsi.

And, last year, Gillette leapt on to the #MeToo movement in a bid to awaken its apparent credentials in the fight against toxic masculinity. It changed its hallowed strapline to "The best men can be" as the suffix to a truly dreadful piece of advertising that men around the world (the lead razor-buying demographic) read, correctly, as a pithy example of nonsensical, headline-grabbing opportunism.

For many brands, the line between showing support for a vital cause and coming across as opportunistic chancers is too thin to feasibly follow without, at some point, falling off. While raising awareness of the anti-racism cause by individuals posting black squares on social media is laudable and effective, the limpet-like efforts of brands to gain kudos in the same way rings hollow – and loudly.

Brands are entities, not beings. Their positioning, personality and tone is decided by committee and acts as the face and voice of organisations, often with thousands of employees and millions of moving parts. They’re incapable of sentient thought or human emotion, thus any attempt at conveying real beliefs will ultimately be hollow.

Without a significant historical positioning on the topic in question, brands that raise their benevolent flags in an opportunistic response to circumstance inevitably look like bandwagon jumpers – no matter how slick the execution and moving the copy.

Purpose is something that is earned, not purchased. Hoped for, but not expected. Awarded, not demanded.

Of course, doing nothing in such circumstances feels wrong too. The ensuing blamestorm from the Twittersphere claiming that your brand doesn’t "care" enough would drown out any sense in your decision to keep your own counsel.

You can’t win – but you can try harder if your brand’s historical positioning allows for it.

So which brands are getting it right? Lego committed to donate $4m to "organisations dedicated to supporting black children and educating all children about racial equality". Additionally, it put its money where its mouth is by pulling all marketing materials featuring police figures for the foreseeable future.

In the UK, Britain’s own slightly less hip – but no less impressive – version of the Nike/Adidas collaboration came from an unlikely source. Demonstrating succinctly and absolutely that racism isn’t everyone’s cup of tea, Yorkshire Tea virtually body-slammed a parochial customer on Twitter who had praised its lack of support for Black Lives Matter. Fellow tea-maker PG Tips quickly backed the move with the #SolidariTea Hashtag, tweeting:

Yes, Jeff Bezos did something similar – but, let’s face it, he can afford to lose a few slow-witted customers and Amazon’s historical treatment of black, Asian and minority-ethnic employees isn’t exactly stellar…

Not every brand has the positioning, history or balls to take such a forthright and arguably brave stance. However, for those brands that inhabit the middle ground, there are opportunities beyond the generic crud we’ve seen over recent weeks.

Rather than campaigning your brand’s intent and raising its hashtagged intentions on a digital flagpole, wouldn’t a simple pledge to fix what is broken be a more pragmatic and useful solution? Picture this – a plain white post with something along the following lines typed in plain text: 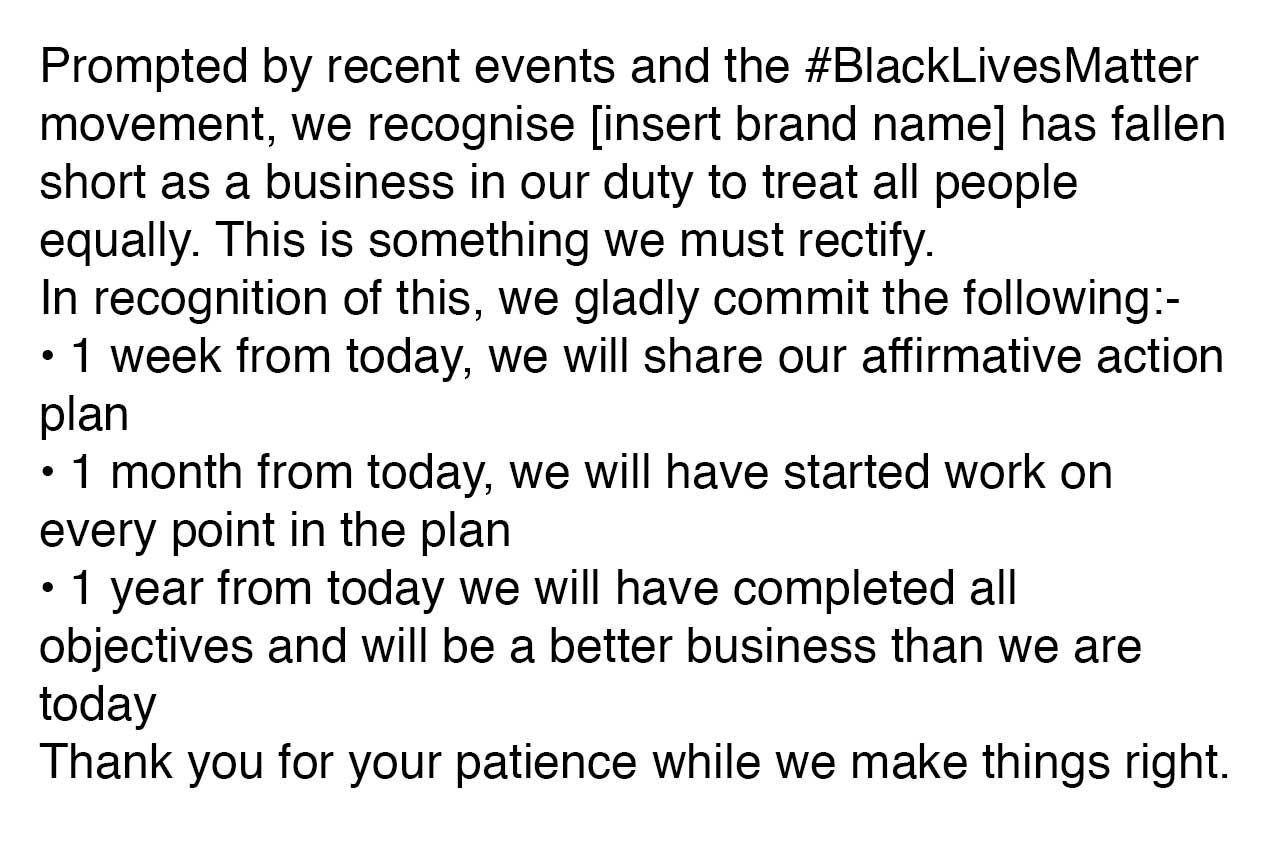 The people behind the world’s most powerful brands should ask themselves whether they should have deployed their significant marketing power to latch on to such a powerful cause in the name of brand enhancement, poorly hidden behind the veil of social purpose.

And the answer is no.