Broadcasters should unite to sell BVOD ads, "legacy" practices like share deals and contract rights renewals must be rethought, and agencies can hoodwink auditors, says a comprehensive report by Enders Analysis.

ITV, Channel 4 and Sky should unite to form an Ozone Project-style joint sales house to sell streaming ads, as well as talk directly to advertisers more regularly, Enders Analysis has advised as part of recommendations to reform a “declining” market.

Today’s report, commissioned by ISBA, warns that TV advertising has fallen in real terms since 2015 and will “inevitably continue to decline”, and yet the linear TV ad ecosystem has “barely evolved” over the past few years.

There were also strong criticisms over the way TV advertising is currently traded in the UK, many of which have been discussed in Campaign online and in print in recent months, namely the use of contract rights renewals and trading against a broadcaster’s station average price.

Enders is also recommending day-to-day trading is conducted on a two-tier approach to buying on linear and broadcaster video-on-demand that would, it says, “harness the power of television, but also embrace some of the benefits of digital”.

The UK TV ad-buying market is dominated in terms of revenue by ITV Commercial (45%), Sky Media (30%) and 4 Sales (25%). Currently, linear TV deals are based on share of broadcast (the share that ITV gets from an advertiser versus Sky Media or Channel 4), while BVOD deals are traded on audience volume (based on a cost-per-thousand or CPM).

Instead, the report recommended the broadcasters offer a split between “premium” and standard” airtime, sold as “audience” and “context” buys. A broadcaster’s deal with an advertiser (or, usually, its media agency) would negotiate the amount of premium airtime the brand would receive, whether on linear TV (primetime and live sporting events), or BVOD (most popular streaming channels, genres, or programmes).

Ultimately, Enders said its findings were designed to address a common complaint by the advertisers it interviewed for its study, namely that TV advertising trading has not fundamentally changed in decades and requires more flexibility for the digital age.

Enders’ recommendations, which it said should be implemented in full by 2023, are:

Nick Manning, a media consultant who founded Manning Gottlieb Media (now MG OMD), told Campaign that advertisers should not wait for broadcasters to reform their practices and should “tackle all four things themselves right now”. Manning cited Direct Line Group as a leading example for setting up its own testing and data collection to determine audience measurement.

Regarding audience and context buys, Manning said: “Nobody is doing that – that’s the most novel [recommendation]. It implies that a lot of airtime should be traded programmatically off-peak, but you can’t do that because the deliver mechanism within broadcasters don’t allow it.

“But the general idea that TV should become more like online, particularly with the demise of third-party cookies and ads needing to be led by content and other forms of data, makes a lot of sense.”

If the TV ecosystem does not evolve, Enders has estimated that the total market will decline by between £364m and £865m between 2019 and 2027. This is based on calculating viewing trends over the past decade, which peaked in 2015 and have declined since the 2016 Brexit referendum. As commercial impacts (audiences) correlates to advertiser demand, the fall in viewing will drag total revenues to about £4.6bn in 2017, down from £5bn in 2019.

The report said one of the main weaknesses in the TV trading system was contract rights renewals, which were introduced in 2003 to protect the market from anti-competitive behaviour from ITV, following the merger of Carlton and Granada and its sales houses.

CRRs, it is believed, reduce product innovation and provide little incentive for broadcasters to move away from share deals, which are peculiar to TV ad sales in that a brand agrees to give the broadcaster a fixed share of their total budget in return for a discount.

This discount, in turn, is calculated against a station average price, which Enders described as “generally well received [but] is a legacy mechanic with some downsides”, such as making it significantly more expensive to reach younger audiences.

The picture for 16-34s is particularly stark, the report said: “We expect that 16-34 viewership will still decline more quickly than advertiser demand, leading to, in our forecast, an estimated 70% increase in cost per thousands to £61.81.” 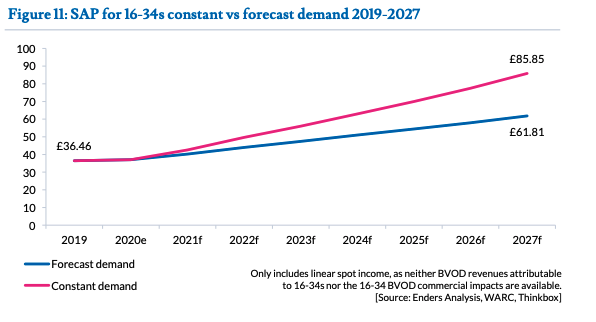 'BVOD collaboration will be critical'

Outside of its headline recommendations, Enders said TV sales houses needed to collaborate further on selling advertising on broadcasters’ streaming services, such as ITV Hub, All4, My5 and SkyGo.

“Ideally this would take the form of a joint venture: a single point of access for all BVOD inventory would provide a consistent user experience for agencies and advertisers across many key areas such as common targeting metrics and booking tools,” the report said.

This sounds similar to the Ozone Project, a joint venture formed in 2018 by The Guardian, News UK, The Telegraph and Reach, to sell online ads jointly for those newsbrands.

Such a proposal has already been mooted by ITV, albeit through its own addressable TV-buying platform Planet V, which formally rolled out last year.

At the time, ITV Commercial managing director Kelly Williams told Campaign: “Success for us is that, in a few years' time, some other broadcasters come on to the platform... If you can buy Channel 4 and ITV and Sky and other broadcasters, that’s got to be a positive for buyers.”

A Channel 4 spokesman did not answer specific questions about the report’s recommendations, but told Campaign: “The Enders report is, in our opinion, a significant paper that recognises the evolution of the market, the requirement from our customers to adapt our own commercial and measurement models to meet these changes, and the significant benefits that a volume-driven and healthy broadcasting ecosystem brings to the market.

“We are taking these findings along with our own to develop commercial models that are fit for a digitally focused and platform agnostic future”.

ITV and Sky were not immediately able to return a comment, but Campaign will update this story when they do.

Media agencies 'know how to beat an audit'

Enders also warned the agency-advertisers relationships needed to evolve, and cited advertiser concerns around how agencies are incentivise to make money, and that the relationship between advertisers and agencies had become “strained” in recent years, leading to a “vicious circle”.

Agencies, meanwhile, have raised concerns about being given smaller commissions by clients, as well as having to accept longer payment windows, more project work and less retained business. Conversely, agencies were accused of making money from “sell-side activities not visible to the client", such as programmatic finance, where broadcasters give agencies extra discounts or free TV spots in exchange for finance outside of a share deal.

The report noted two advertisers that felt agencies were “dragging their heels and are reluctant to embrace changes to the trading model”.

It went on say that broadcasters' sales houses should take the lead in trying to communicate with advertisers directly, as opposed to the traditional convention of using agencies as an intermediary.

"As there is little incentive for the agency to change, this must be driven by the advertisers, with transparency being key," the report adds.

"We would suggest the onus is on the broadcasters to demonstrate to the advertisers the benefits of TV advertising for their brands, and that sales houses increase their client-focused resource and engage in significantly greater dialogue with advertisers (as Google currently does)."

However, media auditors, which are supposed to create transparency and confidence in the system, came under fire too, with an advertiser quoted as saying “[agencies] know how to beat an audit on SAP”.

Enders added: “The consensus is that the audit world has not changed in decades, and that the metrics being examined are antiquated, with one broadcaster questioning whether metrics like daypart delivery, position in break etc. matter in the context of an increasingly on-demand world.”

Sales houses also reported concern that auditors pressure media agencies into getting cheaper prices, and mooted an “expert’s” suggestion that contracts should be assessed by an independent auditor with a greater view of the marketplace that can judge whether agencies are buying competitively or not.

Scott Moorhead, founder of The Aperto Partnership consultancy, who has been outspoken about failures in media auditing and agency transparency, agreed that “legacy media auditing is fundamentally flawed".

He said: “While we recognise the requirement for independent third-party verification, over-emphasis on fairly meaningless measures of success within a fraction of the picture limits advertising effectiveness. The market will struggle to progress until there is a radical overhaul.”

The regulator, not advertisers, should start reform of TV trading

ITV has outsmarted Channel 4 with its creative sales initiative