This year's triumphant brands prove that it pays to innovate, while research highlights the added consumer appeal of lines that display the Product of the Year logo.

A recession can be the killer blow to brands that fail to innovate. The news from the high street earlier this month, with HMV and Blockbuster going into administration, is evidence of an unforgiving economy. Conversely, it can also offer opportunities for those brands willing to take a gamble by overhauling their products or targeting new markets while their competitors play it safe.

The brands that have triumphed in 2013's Product of the Year awards have demonstrated that investing in innovation sets them apart in the eyes of consumers. By selecting the winners based on a survey of more than 12,000 people, the awards measure innovation as it is understood by consumers - and, therefore, the bottom line - rather than peer reviewers.

This year's winners originate from a wide range of categories; from feminine care to pet care, and confectionery to cheese. The latter pair feature among a growing selection of food categories in the awards, says Product of the Year managing director Mike Nolan. In the UK branch of the awards, non-food FMCG has usually accounted for 70%-80% of entries - in contrast to most of the other countries in Europe where the awards also run. 'The UK has become more foodie generally and we're now catching up with Europe,' adds Nolan.

He admits that the number of entries dropped in the wake of the 2008 financial crisis, but has since recovered to about 90% of its pre-slump peak. More than 110 products were entered into the UK awards this year. A judging panel, chaired by Siobhan Freegard, managing director of awards partner Netmums, selected 89 of the entries to progress through to the consumer research stage.

According to Freegard, spotting innovation that can save time in the home is always a hot topic for Netmums users. 'Our mums love discussing products, especially new stuff. There are long threads on our forums about how to keep on top of housework; people learn from each other. They talk about innovation that might fill the gap between being on top and not being on top of the washing, or how to get those stains out of the kids' T-shirts,' she explains.

The number of categories in the awards depends on the types of products entered, and at least two are required for a particular category to be created (though these can be entered by the same brand owner). It is this flexibility which makes the awards stand out, says Nolan. 'We can run categories that reflect what is going on in the market; that is why we don't preordain what those categories will be. We would like to see more "eco" products entered, and make-up and beauty do not feature as much as we would like.'

It would be fair to say that big brands dominate this year's awards. However, smaller companies do make their mark on the list. 'For a small brand to win is a challenge, but it is a uniquely level playing field where we are not judging the brand name, the marketing or the advertising,' says Nolan. 'We are focused on asking about the product - so there is as much chance for small brands to win.' One of these is Rocktails (see below), which Nolan says successfully tapped into one of the knock-on effects of the downturn by creating the 'going-out experience' at home with its frozen-vodka cocktails.

The latest research, conducted by TNS on behalf of Product of the Year, revealed that products featuring the awards logo delivered a 19% higher purchase-intent than those displaying the word 'new'. In addition, 33% of those surveyed said the logo increased their trust in a product's ad claims. 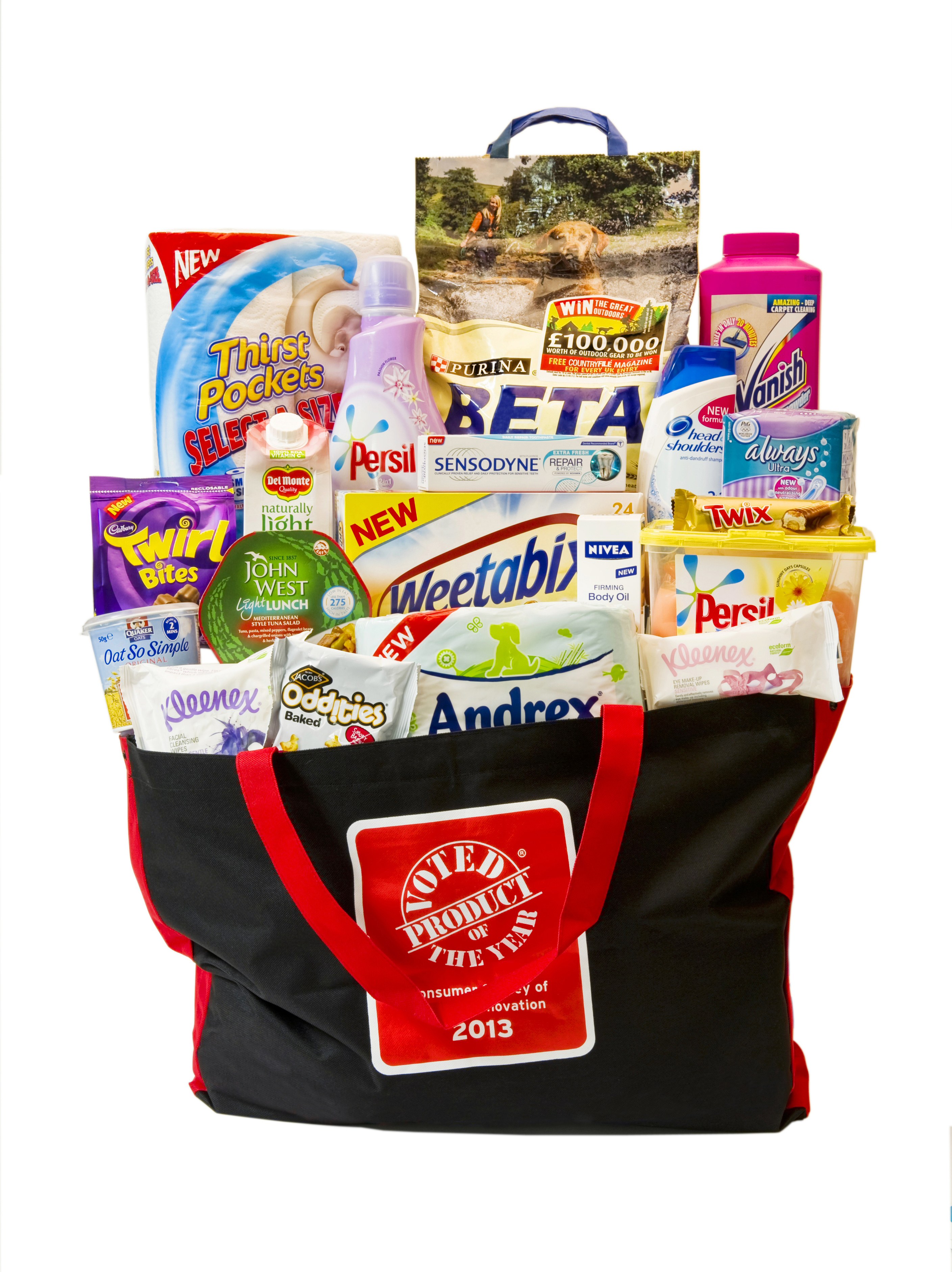 Although the study was carried out in 2009, Nolan believes it still reflects the value that brands derive from winning one of the awards. The fact that many brands return each year, he says, is further endorsement. 'Internally, winning can also invigorate the marketing team,' adds Nolan. 'It's very easy these days to be stuck in the ghetto of marketing, especially within FMCG, just looking at things such as return per linear foot of shelf space.'

The partnership with Netmums might also help to increase awareness of the awards, says Freegard. 'A lot of ordinary mums wouldn't have heard of Product of the Year (before the partnership), but now when it appears in supermarkets, they might know what it is,' she adds. 'Everyone is looking for standout on the shelf, and I think that mums want that too - they want help making their purchase decision.'

To further raise awareness following award-wins, some brand owners invest heavily in media campaigns, while retailers such as Sainsbury's, Tesco and Waitrose have built advertising activity around Product of the Year winners.

The Product of the Year logo has also been featured on ecommerce sites, alongside the winning products. For example, sales of Ryvita Thins (a winner in last year's awards) rose by more than 20% on sainsburys.co.uk over a three-week period in March 2012.

Nolan believes the biggest benefit of Product of the Year status is its simplicity. 'It's a simple red logo that you can seek out if you want to and ignore if you don't know what it is,' he says. 'It's about fast-moving consumer goods, not cars and computers. Shoppers spend fewer than six seconds at fixture choosing a product, and if Product of the Year can get the attention of a shopper and get the product into their basket for a trial, it is valuable in any economic climate.'

With no sign that the UK economy is heading for an imminent significant upturn, brands will remain under continuing pressure to create new products. They must also be able to demonstrate, however, that these innovations are not just gimmicks, and that they meet or create a tangible consumer need. 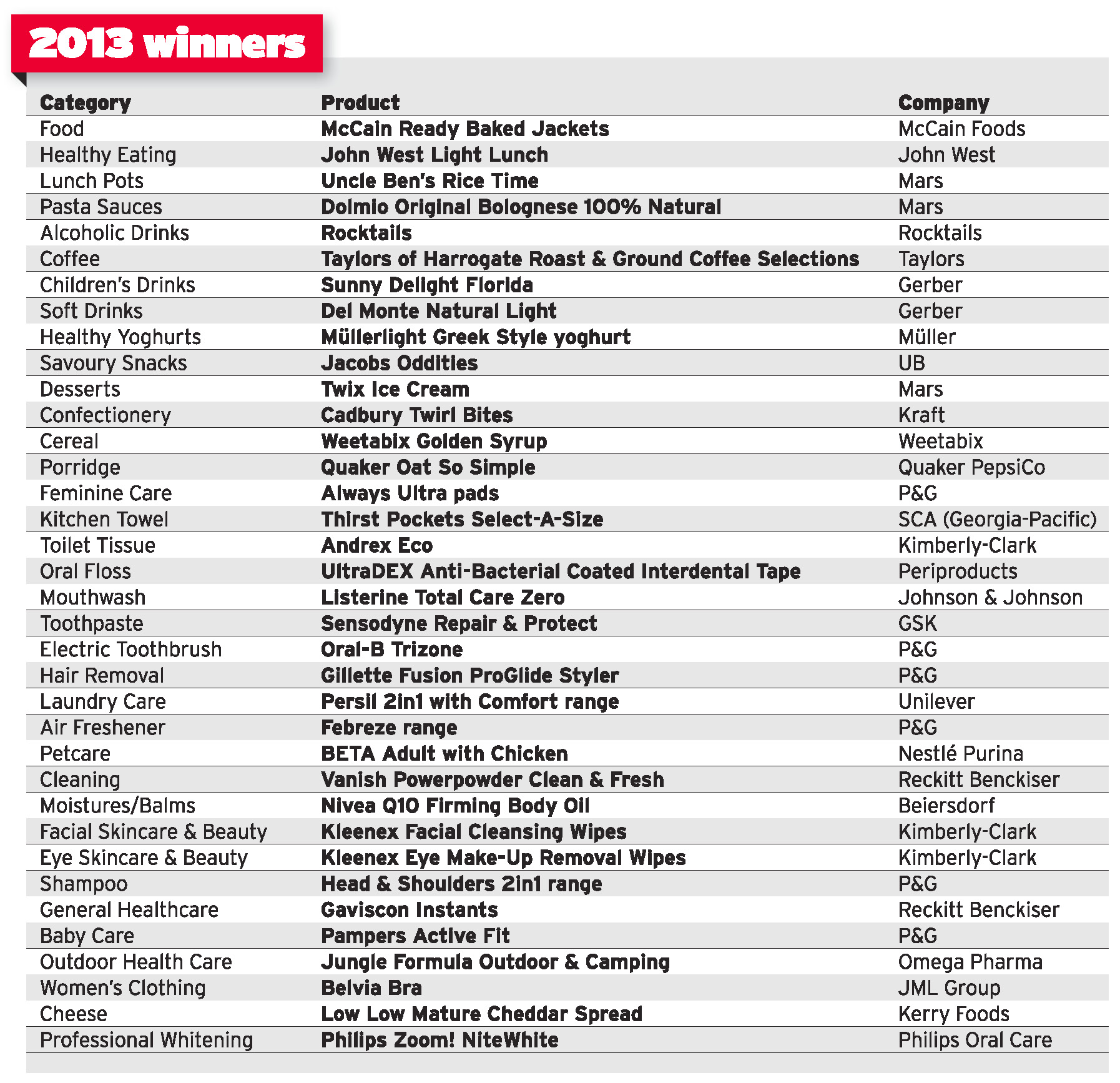 THE BIG AND SMALL OPPORTUNITIES 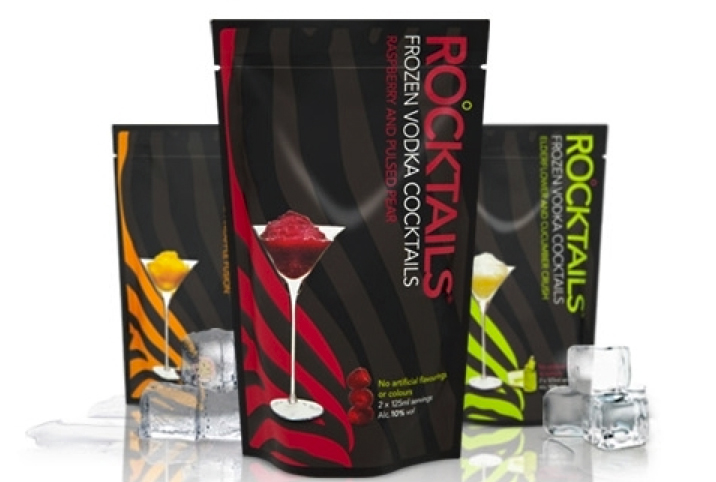 Frozen-vodka cocktails brand Rocktails shows that small can be successful in the Product of the Year awards. The company employs only four staff and has been trading for less than two years but, as Product of the Year managing director Mike Nolan explains, brands are judged on product, not scale.

Rocktails' products are stocked in more than 100 Sainsbury's stores.

Co-founders Helen McAvoy and Naomi Kibble met while studying at Cardiff University's Business School and came up with the idea after struggling to recreate the bar experience at home. 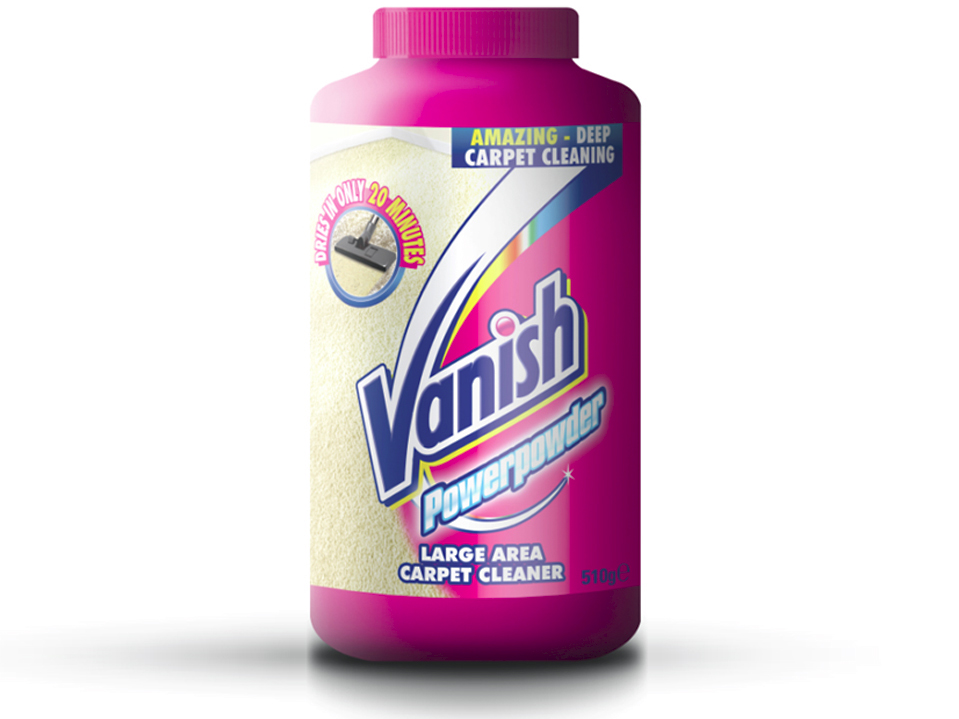 Research for Reckitt Benckiser found that while nine out of 10 households owned carpets, fewer than 20% used a carpet cleaner. Vanish Powerpowder was launched in 2011 with the aim of making carpet cleaning easier, as well as much cheaper than using professional carpet-cleaning machines.

Reckitt Benckiser took a well-established brand, Vanish, into a new niche, while meeting three key needs of the modern consumer: low cost, ease of use and speed.

The powder takes 20 minutes to dry after application and is safe to use on wool, nylon and polyester carpets.

Product of the Year 2014: the winning formula