Nearly a quarter (22%) of all marcomms M&A deals involved private-equity funds - double the 11% seen in the last two quarters of 2017.

These 41 deals represent a dramatic increase in private-equity backing within this sector.

"Total PE activity for 2017 was up on 2016, and this quarter is showing an even larger jump in deal volumes," Julie Langley, partner at Results International, said. "Transactions such as LiquidHub and Ocean Outdoor reinforce that not only are private equity finding valuable marcoms businesses to invest in, but that these investments are delivering exits and returns – a key factor in driving continued PE interest in the sector." 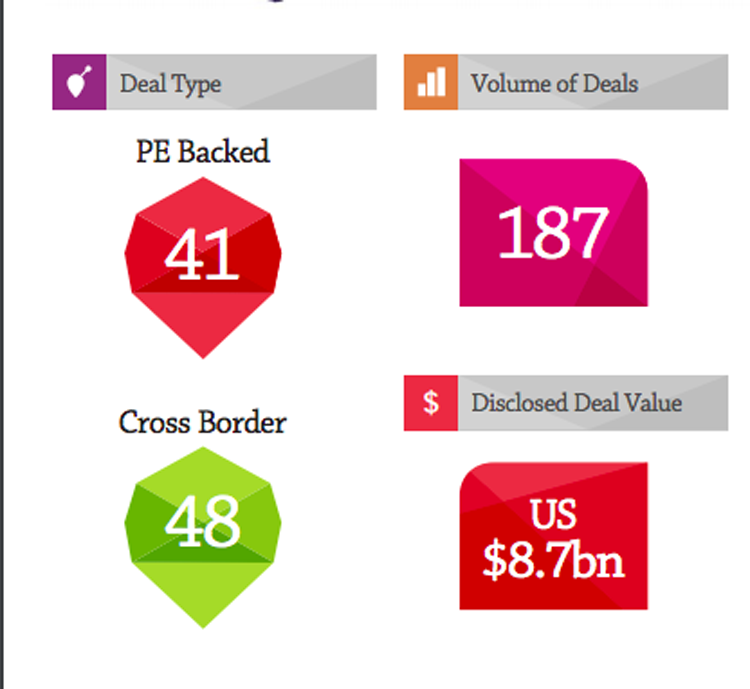 She added that the PE-backed Ocean Outdoor deal is a "great example" of this as it was initially backed by LDC before Searchlight Capital acquired a majority stake in 2014, leading to the $274m exit to Ocelot Partners in March.

Dentsu was the most active shopper

Overall, the number of deals conducted in the first quarter remained fairly static at 187, down fractionally from 193 in Q4 2017.

Dentsu was the most active buyer this quarter with seven deals, while Accenture, WPP and Omnicom all made three acquisitions. WPP, notably, had its quietest quarter in recent years.

"The holding companies as a whole did fewer deals in Q1 than in any quarter in 2017. Ahead of Sir Martin Sorrell’s sudden departure WPP announced only three deals in Q1 versus 30 in the whole of 2017," Langley said. "This unexpected news is likely to create even more internal focus on succession and restructuring. That said, we expect to see WPP continue to announce deals, but most likely in line with the lower volumes seen recently."

In contrast, she continued, Dentsu appears to be on track to do a similar number of deals as in 2017, and Publicis Groupe has recently announced a war chest of €300-500m (£263m - £438m) per year to be invested in areas such as data and digital transformation. 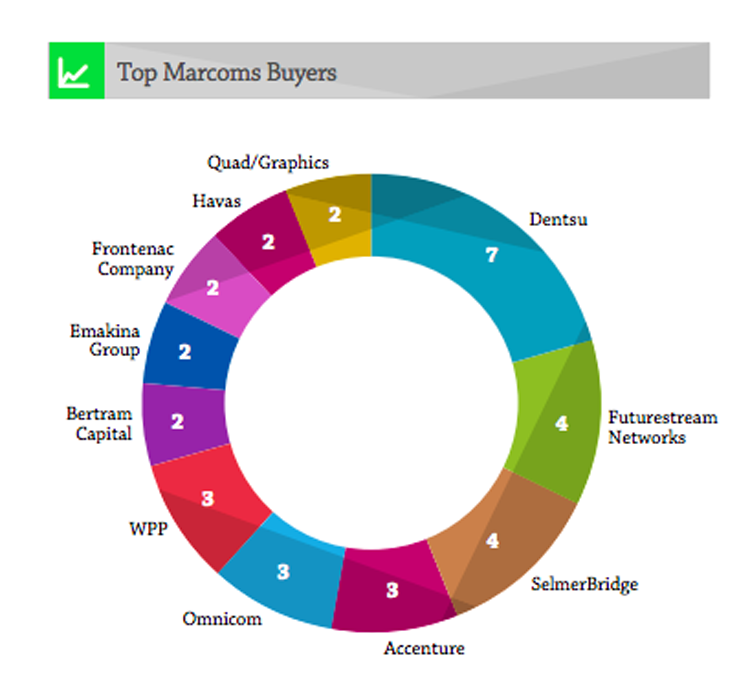 "What is interesting is that while the networks, for the most part, have seen revenue growth slow and are struggling with headwinds, we see really healthy performance among many of the independents who are able to respond nimbly to the changing environment," Langley said.

With the number of management and IT consultancies following Accenture's lead on the rise, the M&A market is particularly vibrant, she added.

"Every quarter we see a new consultancy group entering the marcoms market. In Q1 Capgemini made its second major move into the space in acquiring LiquidHub, following on from its acquisition of Lyons Consulting Group last year," Langley said.

Over the quarter, full-service digital agencies remained the most active subsector of marcoms with 28 deals, representing 15% of the overall market.

"Digital and digital transformation remain the areas that buyers tell us are their priority, but if you look at the deal activity we continue to see strong appetite for good businesses across the spectrum of marketing services. Interest ranges from more traditional areas such as events, OOH and offline media-buying right through to technology-led agencies with capabilities in areas such as Salesforce and Adobe," Langley said.

The research also found that 26% of deals were cross-border in Q1. Volumes of transactions involving UK targets were broadly static, suggesting Brexit is still not really putting acquirers off, but deals in Western Europe slipped slightly to 19% of overall volumes, down from a quarter of activity in Q4 2017.

This slight fall in deal activity involving Western Europe is "just a blip", Langley noted. "There is still huge demand for scaled targets in the main European markets of Germany, the Nordics and France and we are confident that by the year-end the proportion of deal activity involving Western European targets will be back up to where it was in 2017."

Further, M&A activity within this sector is not driven purely by PE and the consultancies as within this first quarter, buyers ranged from business intelligence company Informa, to Salesforce and entrepreneur network Endeavour.

"With this level of demand the M&A market remains very buoyant," Langley concluded.

Agency M&As up 126 percent globally, with U.S. leading the way

Krow sells to The Mission in £14.5m acquisition

Accenture: brands are only just waking up to importance and 'complexity' of personalised content

Agency M&As up 126 percent globally, with US leading the way