Love Island star promoted brand on platform but did not make clear post was advertising.

PrettyLittleThing has fallen foul of marketing rules on Instagram after reality star Molly-Mae Hague posted a photo of herself and tagged the brand in a post without making it clear that the post was an ad.

The post, which appeared in September, featured a picture of the former Love Island contestant wearing a coat and featured the caption "A/W, I’m ready", with @prettylittlething tagged. 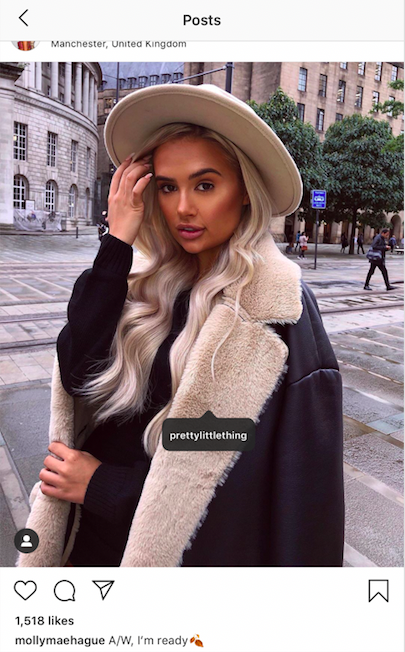 PrettyLittleThing confirmed to the ASA that Hague was a brand ambassador but said the post was not part of their contractual agreement. Via her agent, Hague told the regulator the post was not an ad but an organic feed post and she had tagged the retailer because she was wearing one of its products.

The fashion brand told Campaign: "PrettyLittleThing is aware of the ASA guidelines and strives to ensure all its Influencer ads comply with ASA guidelines. In this instance, the post made by Molly Mae was an organic, unpaid post.

"PrettyLittleThing and Molly will continue working together to ensure the ‘paid partnership’ tag is used, where relevant, in all further posts."

Is it sexist for an ad to feature only one gender?