Love them or hate them, these gifts will make you say 'WTF.'

Periscope is making holiday shopping easy with a list of gifts that anyone is sure to either love unconditionally, or hate enough to throw into a fire.

The Hassliebe marketplace (love-hate relationship in English) is an anti-indifference holiday gift guide designed to inspire either intense love or hatred, which in Periscope’s eyes is better than being thrown into a closet to gather dust, or worse, be regifted to some other poor soul.

Each of the 14 gifts presented comes with a price tag and reasons behind why the recipient would either love or hate each one. 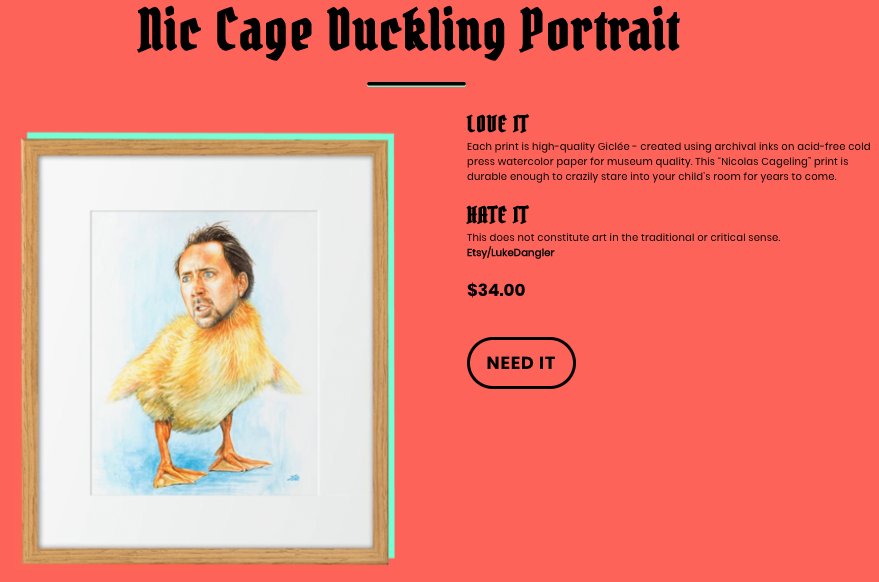 The tongue in cheek list of gifts for all types starts off innocuously enough with what is essentially a bedazzled Boba Fett helmet for the Star Wars fan in your life.

A little out there -- yes, but stranger things have happened.

But that’s just a warm-up for the rest of the list which ultimately amounts to a slow descent into madness and hilarity, with gifts such as air-conditioned pants (discounted now to only $194.95) and human hair chin beard (count me firmly in the hate camp for this one) featured prominently.

If there is one takeaway from Periscope’s list, it is that just because humans can, they probably will, as even the most bizarre products featured actually exist and can be purchased.

Despite being more of a joke than anything, there will undoubtedly be more than a few bottles of Rye Bread Cologne in someone’s stocking when all is said and done.

According to Periscope Chief Creative OfficerPeter Nicholson, there actually is a more serious point to the silly holiday list.

"This unique holiday gift list is for those who don't want the presents they give to go unnoticed or forgotten," he said. "When you unwrap these items, you can't feel nothing. Just like when we create work for our clients, we would far prefer people love it or hate it than to feel indifferent about it," he added.

Liz Ross, Periscope Chief Executive Officer agreed, stating: "The rising tide of indifference plagues our industry and during the holidays apathy runs especially high with so much noise and activity, so we decided to have some fun in helping people fight indifference

Most important Christmas ad this year is not about buying stuff