In-housing and how agencies adapt to brands' need to better use data were hot topics at Campaign's inaugural Performance Marketing 360 conference.

"It feels like we’re at a tipping point when performance marketing comes of age."

It was quite a claim by GoCompare’s chief marketing officer Zoe Harris, who was chair of Campaign’s inaugural Performance Marketing 360 conference in Brighton yesterday.

She would know, given that her brand is one of the UK’s biggest spender on performance-driven media.

However, judging by the comments from marketers and agencies during the event, this "tipping point" may lead to further in-housing and agency restructuring.

Such an admission came during a debate on in-housing, when Merkle head of service partners Toby Benjamin said – admittedly controversially – that it’s a "necessity" for brands to be able to in-house, which is a sign of organisation’s marketing maturity.

He explained: "The expectations that are placed on brands – to reach capability from an experience perspective, and to have speed and be agile enough to reach those customer changes – means to have some of those functions close to the brand."

However, in-housing should not be treated as a binary decision, Benjamin suggested, but looked at as a spectrum of marketing functions, some of which can be led by an agency, by an external agency co-located within the brand or fully brought in-house.

"In-housing means different things to different brands," he said. "If it’s that I want more transparency, or more control, you can do that without shifting the model that much… whereas further down the line, to increase specialisms, maybe that model shifts around more."

'Media agencies are getting battered by procurement'

Earlier in the day, the event heard from the likes of performance-native brands such as Deliveroo, The Gym Group and Soak.com, which relies on data heavily when planning their own performance marketing, while above-the-line campaigns are still bought by traditional media agencies.

However, media buying in particular "needs to be thought about", Confused.com’s chief marketing officer, Sam Day, proposed during the debate, because media agencies are "under massive margin pressure, they’re getting battered by procurement".

He speculated: "We’re getting into this declining circle now. Maybe there needs to be a wider debate. Maybe there should be ultra transparency, like how much margin do you need to make?" 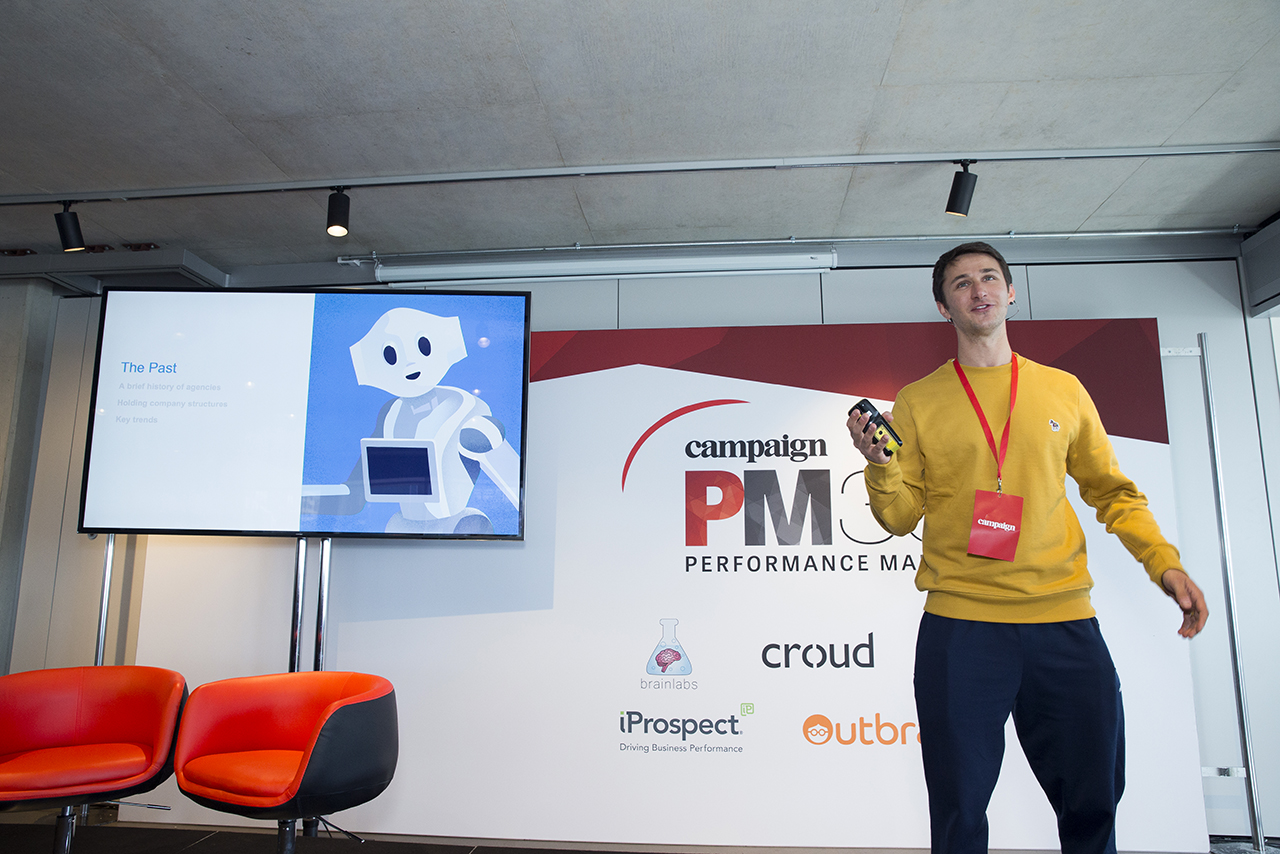 According to Brainlabs founder and chief executive Dan Gilbert (above), agencies are guilty of putting talented and creative people into siloed organisational structures.

His vision of the agency of the future is "one hive", in which a holding company will draw on centres of excellence. WPP shop VMLY&R, which has been restructuring following last year’s merger of VML and Y&R, has recently launched a centre of excellence model in EMEA.

"Clients want direct interaction," Gilbert insisted. "We use the analogy of a hive structure, where the hive leader can do all the biddable, creative, data and tech within one place.

"The real reason there is so much interest in consultancies right now is not because of marketing, because they’re quite shit at that – but because they understand the need for a business partner."

Although Gilbert gave his own agency a six out of 10 for being "client-centric" on his own terms, he was hopeful that Brainlabs will be a nine next year.

The internet has also enabled brands to sell directly to consumers online without retailers – a further data-rich environment for performance marketing.

However, does that make Amazon, the world’s biggest online retailer, a partner or a competitor? What brands gain in sale, they lose in first-party data (held by Amazon as the selling platform).

Swayne explained: "[Co-opetition] allows brands to maximise conversation across all platforms in the mid term to move beyond commerce to the longer term."

That means looking at differentiating the kinds of products that are being sold on Amazon – something that may need to be different from products being sold on an owned direct-to-consumer plattorm.

Dentsu Aegis Network, meanwhile, forecast that Amazon will take in $20bn of adspend by next year. The company surpassed $10bn in its 2018 earnings report.

When polled, 53% of the audience said Amazon was good for brands, while 47% said it was bad.

The concern was crystallised in a question from the audience that pointed out how Amazon tries to scale its online retail business by making products homogenous. "Making things homogenous actually limits choice" was the questioner’s concerned remark.

Swayne gave an optimistic answer: "I can’t see us as a nation letting Amazon choose everything we buy or services we take. There will be increased competition – demanded from us as people and consumers."

Increased market competition, the theory goes, should drive down prices. But economic theory also mandates that prices of services go down as they become more substitutable.

But therein lies the wider lesson for agencies, particularly amid further adoption of performance-led marketing strategies by brands: if services between agencies become commoditised with the same techniques and methods, how can marketers choose beyond price?

If we are past the tipping point, as Harris says, the industry now needs to ensure that this direction of travel does not resemble a race to the bottom.

Deliveroo: programmatic is 'most challenging' media for us

How Direct Line, Eve Sleep and Booking.com bridged the brand vs performance divide